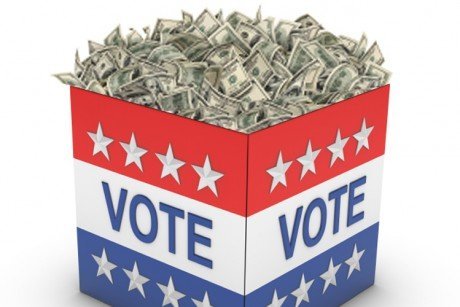 Sunday night we got no less than six automated messages from candidates on our home answering machine, and other than the one pre-recorded by Matt Damon (really) I deleted them all in turn without listening to more than a millisecond. I’ve lost patience. I’m irritable. I’m tense. I can’t wait until Wednesday when finally, I won’t have to listen to any more of those pathetic television ads complete with doomsday music meant to scare the hell out of me. And I know I am not alone.

The way I see it, an awful lot of money was spent trying to sway my vote, and it didn’t do a thing for me- except piss me off. I long for the good old days, when only millions of dollars were spent on presidential campaigns. In the last couple of weeks, every time I read a news report about this year’s campaign spending, I visualized Dr. Evil, pinky finger at the corner of his mouth, suggesting that he would hold the world ransom for (dramatic pause)…One. Million. Dollars. Why spend millions on the campaign when you can spend billions?

According to opensecrets.org, the Presidential election alone accounts for $2.6 billion in spending-and that is just by presidential candidates, major party committees and outside organizations, which have to report their spending to the Federal Election Committee. But that figure, as bad as it is, doesn’t include the “soft money”- the super pac money- spent by organizations the likes of American Crossroads, Restore Our Future, and Priorities USA Action. No one knows exactly how much that is, but it is generally understood that spending by these types of organizations accounts for hundreds of millions more. From what I’ve read, I’m guessing the total spending this year will come close to about $3.0 billion.

And that is just the Presidential election. For my senate race (Massachusetts) the Scott Brown and Elizabeth Warren campaigns together spent approximately $68 million.

All that money. All those ads. All those posters. All those rallies. All for one day. And at the end of it all, only half the participants are happy. Actually, I’m not sure anyone is happy. Remember the Onion headline after Obama won in 2008? “Black Man Given Nation’s Worst Job.” I think that just about sums it up.

Twenty-eight years ago, my dad could see the writing on the wall as soon as my mother started planning my wedding. Every time my dad had to put down another deposit, he made the offer to me: Would we rather just have the money? I didn’t take it then-what does a 26-year- old know? But over the years I started wondering whether the wedding money would have been better used, for say, a down-payment on a home, to feed the homeless, or to start a business of my own.

I think my dad had the right idea then, and it is the right idea for now. Forget McCain-Feingold. That only got us so far. We need real campaign reform–something that we can all get behind. They should just give us the money instead. No more ads, no more calls. Leave us alone, and just hand us a check.

I figure it at approximately $39.00 per actual voter here in Massachusetts–give or take a few dollars. Not everyone gets a check, of course–just those of us who actually vote. Everyone else just gets some peace and quiet from an election they obviously don’t care about. Really, it seems like a no brainer.

Give us the 39 bucks, and we will donate it to the Red Cross to help victims of Hurricane Sandy.

Give us the 39 bucks, and we will feel less angry, disgusted, fearful–to the contrary, it will make our day, like finding a $10 bill in the pocket of a raincoat.

Give us the 39 bucks, and we can do something with it that will make us feel good: get a pedicure, donate to Planned Parenthood (in case my candidate loses), or buy a healthy dinner for a homeless family, complete with broccoli.

Give us the 39 bucks and we will promise to take someone supporting the opposing political candidate out for drinks and have a reasonable conversation.

Give us the 39 bucks, and all the politicians will look better in the end, because quite honestly, in the weeks before the election, they all appear pretty damned ugly.

Give us the 39 bucks, and give us a few weeks of silence to think.

Really, can we forget the campaign ads, the telephone calls, the signs, the rallies, the buttons, the balloons? I love hearing Matt Damon on my answering machine, but I know I would rather have the money.