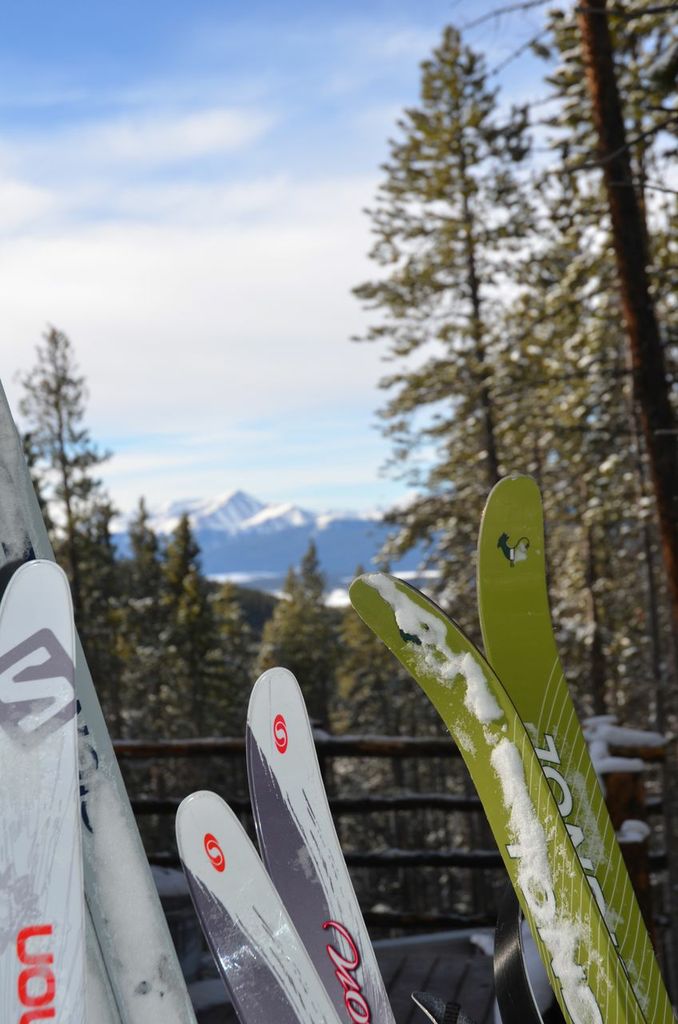 Women’s Getaway to a Yurt at Tennessee Pass A century ago, a promoter at the fledgling National Ski Association promised ladies that skiing “gives pale cheeks a healthy color, makes nervousness disappear, and makes you a better woman.” Our recent “girls group” outing to back-country ski and sleep overnight in a yurt at Colorado’s Tennessee Pass confirmed the marketer’s venerable claims.

As Mary Margaret, fresh from sea level in Ottawa, and I drove through the mining town of Minturn and the spectacular mountain gorge near Red Cliff, she admitted to being nervous about acclimating to the thin mountain air at 10,800 feet. We pulled up next to Ski Cooper’s quaint ski hut and awaited the arrival of our fellow yurters. Jay, the gentle manager, told us the temperature had been -12 degrees that morning. We ordered hot cider and delicious vegetarian chili from the café as we sorted gear by a hot wood stove.

My 21-year-old niece, Kelly, arrived with her college pal, Kelli, then my sister, Amy, arrived with her geologist friend, Nancy. We introduced ourselves to one another. Handing our overnight packs to Jay to transport via snowmobile, we began a gradual 1.5-mile ski through bright sunshine, Cerulean blue skies, and snow-covered lodge pole pines. At the top of Willa’s Way, we stopped, gasping for air.

“I love Willa Cather,” Nancy said. “She is one of my favorite authors; Death Comes to the Archbishop is amazing.”

Mary Margaret nodded, “Have you read Peace Like a River? Beautiful descriptions of the West.”

“Or Wallace Stegner? Angle of Repose is partly set in Leadville, right near here,” I added.

We stopped at the Cookhouse for more hot cider, then crossed an open field and entered a cathedral of tall dark pine spires. In the late afternoon shadows, we finally spotted the solid, sandy-colored yurts. Majestic mountain peaks hid behind the trees. Our cozy yurt was named Belvedere, paying homage to the Italian mountain where the 10th Mountain Division skiers trained at Tennessee Pass, surprised the sleeping Fascist forces. The yurt was well stocked with three queen-sized beds covered by thick comforters, orange earplugs displayed like Halloween candy in a glass jar, cooking utensils, running water, and a wood stove. We settled in, enjoying the warmth and nibbling on little bags of gorp (nuts, raisins, and chocolate pieces) left on the pillows.

In the yurt’s Guest Book, we read about previous girls’ gatherings. The Boozing Babes Book Club noted: “It snowed, it rained, the moon was full, we laughed, some snored, and we shot the bull.” Another gals’ group wrote: “Six girls in a yurt/Only one got hurt/None in a skirt/Left without dirt/And not one lost a shirt. 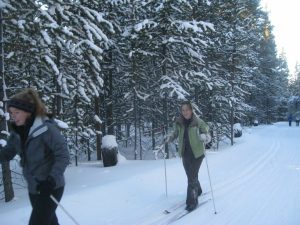 Too soon, it was time to ski to dinner. Over wine, pomegranate-laced greens, elk with blueberry sauce, mashed sweet potatoes, and rhubarb pie, the group crystalized, like a unique, six-sided snowflake. Kelli described her brother, now a salesman for “Hello Kitty” products, and his former career as a mascot, first at CSU and then for a Japanese baseball team. Kelly, recently back from Semester at Sea; said the yurt accommodations were infinitely nicer than a typical youth hostel.  Mary Margaret described nearly drowning after falling off a river raft. Amy described the new Denver head shops selling now-legalized marijuana. Nancy, eschewing the brown bread, described her new gluten-free diet. We talked salt; Mary Margaret had admired elaborate sculptures of the Pope in a Polish salt mine, I added that Venice was so powerful because it controlled the Mediterranean salt trade.

After dinner, we strapped on skis, donned headlamps, and slowly made our way back to the warm yurt under magnificent stars. Sparkling snowflakes blew off the pines and into the lights of our headlamps. I fell asleep to the giggles of the two Kellys playing Banana-gram. In the middle of the night, I added a log to the stove, donned my headlamp, put on a jacket, laced up my snow boots, and stumbled to the outhouse. The stars were amazing, even if the outhouse was cold.

In the morning, the temperature snuck above freezing and the six-sided snowflakes on our skis began to melt. We shared coffee and granola bars before reluctantly packing up, better women for having shared the cold, the climb, the yurt, and the camaraderie.

Logistics: Fly into Eagle/Vail airport; rent a snow-worthy car and drive 45 miles to Tennessee Pass/Ski Cooper. Yurts are $225 per night and accommodate up to six people. Cookhouse dinner is $85 per person. Call 719-486-8114 for reservations. Yurts book up fast, especially on weekends, so plan in advance. Yurt trip would be a perfect add-on to an alpine ski trip to the Vail/Beaver Creek area.

Women’s Getaway to a Yurt at Tennessee Pass was last modified: January 27th, 2014 by Katie Dolan