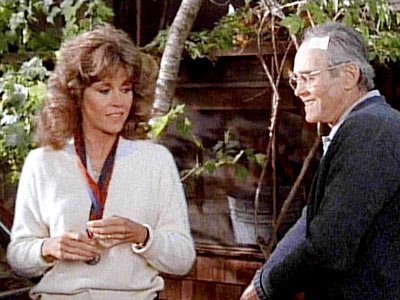 “Uncle Red had the best trick,” my cousin Don told his granddaughters at a recent family reunion.“ He would smoke a cigarette down to the stub and dive in the water. When he came up he was still puffing on it.”

I remember my father balancing on the edge of the diving board at our family’s cottage, concentrating on his cigarette with an audience of cousins and their friends watching on the dock. Every summer he performed the stunt while my sisters and I observed with detachment, subdued by our father’s grim spirit—his silence, his frightening raucous laughter when he’d been drinking, and his gruff indifference toward us.

As Father’s Day approaches each year I find myself sifting through the family stories, looking for a connection between the father I knew and the popular Uncle Red.

“Did you ever notice a darker side to Under Red?” I asked Don. Only recently my father’s younger brother told me he got the name Red from his fiery temper as a boy, not his sandy hair or skin that burned and freckled in the sun, like I’d imagined. But Don recalled no dark side or fiery temper.

I was four when a German Shepard knocked me down, licking my face and pummeling my body. As shrieks exhausted my air supply, my father stood above me, laughing. Some years later when I balked at eating raw oysters for dinner he grabbed my fork, speared an oyster and plunged it down my throat where stab wounds from the tines made swallowing hurt for days. And there is the raw data from my daughter, not yet four years old, who piped up from the back seat on a car trip to visit my parents, “Why does Grandpa push me off his lap when I try to climb in it?”

Twenty-five years after his death, I probably know most of the Uncle Red stories, but who was the man beyond the family circle? At the assisted living residence in Pennsylvania’s Blue Ridge Mountains where my mother lived until her death at 94, I met a woman who was a secretary in the research lab of the company where my father worked for 40 years. I asked Hulda what she remembered about him.

“Red was always considerate. Unlike most of the men there, he didn’t look down on us just because we didn’t have a good education.” I wondered if secretaries in her day made coffee for their bosses. “Your father never would have stood for that,” she assured me.

On a visit to my hometown, I ran into Howard Cyr, a retired community dentist and civic booster. “Which one of Red’s daughters are you?” he asked. After we established which one, he said. “When you were a teenager you called your dad from Easton to say you’d been in an accident and the family car was towed away. ‘Come get me,’ you said. ‘How am I supposed to come get you if you wrecked the car?’ your dad answered. Red told that story and, just the way he told it—well, I’ve never forgotten it. He was a gifted storyteller, your dad.”

In Allentown I visited Jim DeVore where he lived with his daughter. Jim was my father’s work partner in metallurgy. At 90, his tall lean frame had shrunk and his once-rugged features had become fleshy. But when Jim leaned toward me in his rocking chair I felt the presence of the man I once knew. His memory was sharp and conversation flowed easily.

“When I first came to the company I couldn’t write worth a damn. In fact, I would have been fired, except I was given a second chance and assigned to work under your dad. The first report I wrote for him came back all marked up in red pen. I felt like a freshman in college. But Red urged me to keep trying. Each new submission had fewer corrections, until I was finally in the clear. About a year later, on the basis of one of my extracts, the company sent me to Johns Hopkins for two years of graduate study.”

I thanked Jim for talking to me and hoped I hadn’t tired him out. “Consider it payback. I owe my career to your dad.”

The gulf between the public and private man speaks of unimaginable torment, demons at work that I will never know. I’ve also lived long enough to understand none of us turns out to be the parent we intended. This Father’s Day I feel my father’s pain merging with mine in a pact of forgiveness.