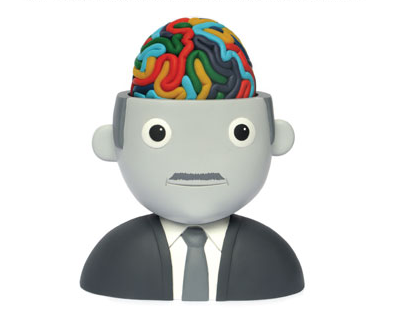 I’m looking for my glasses, but I can’t find them because they’re on my head. So I find my backups and try to put them on, but discover I’m already wearing a pair.

I would feel stupid except at times, I feel downright brilliant. This has probably happened to you, too. Maybe you’re listening to a younger person explain a problem at work or you’re reading an article in the news, and suddenly all the facts connect and you come up with such an awesome solution you want to call the Nobel commission.

Except you don’t quite trust what happened, because only yesterday you came home from the grocery store and put the bananas in the hamper. Maybe what you’re having is some kind of brain flair before the cells die. You never shine so brightly as just before, you know – pffffft.

Stop worrying. Both things really are happening. New research confirms that you’re both more addled and more brilliant than ever before in your life.

If you’re a typical middle-aged* person, the glasses and bananas are real, and so is the intellect.

The science of the aging brain is quite new; conclusions being drawn just in the past few years prove that we have more to be excited about than ever. For example, it wasn’t that long ago that we were told brain cells only died; none were regenerated. However, that has now been proven false. The brain DOES produce new cells, primarily in the area relative to memory.

But I’m getting ahead of myself.

In a great new book, The Secret Life of the Grown-Up Brain, author (and science editor for the NY Times) Barbara Strauch produces tons of evidence that, while our older brains definitely have some weaknesses, they also develop amazing, surprising, even beautiful workarounds. In fact, the older brain is gearing up, not slowing down. All during December I’ll be telling you what I learned, and – plagiarism alert! – excerpting heavily from her book. That’s because I can’t say it any better than Barbara did.

Here’s some good news: in older age, you’re smarter. This is because you’ve accumulated such a wealth of data, and the human brain has a special talent: deduction. Per Ms. Strauch:

The brain builds strength (over a lifetime) by building up millions upon millions of patterns, allowing us to “recognize even vaguely similar patterns and draw appropriate conclusions.”

“Frequently,” says Goldberg, “when I am faced with what would appear from the outside to be a challenging problem, the grinding mental computation is somehow circumvented, rendered, as if by magic, unnecessary. The solution comes effortlessly, seemingly by itself…I seem to have gained in my capacity for instantaneous, almost unfairly easy insight…”

According to Barbara Strauch, when faced with new information, the older brain might take longer to assimilate and use it. But faced “with information that in some way – even a very small way-relates to what’s already known, the middle-aged brain works quicker and smarter, discerning patterns and jumping to the logical endpoint.”

This is an evolutionary triumph. We’re not called homo sapiens –thinking man – for nothing.

Of course, there’s no getting around the fact that we’re more easily distracted and more likely to lose focus as we age. This is because as you get older, new information comes into the part of your brain that’s good at daydreaming. So when you’re trying to read a newspaper in Starbucks and somebody’s jabbering loudly on his cellphone and you can’t concentrate, it’s because the daydreaming mechanism is doing a crappy job of managing the new info.

You can mitigate this with discipline and practice, but you have to work on it. Personally, I think daydreaming is a treat, and I’m not sure I want to curtail it.

Remember how I said your brain gears up rather than slowing down, later in life? I can’t wait to tell you more about it but I’m already up to eight hundred words and I don’t want you to lose focus. Thus I’ll save bilateralization for next Friday. Now go have a nice daydream.

*Definition of middle age, per Barbara Strauch, is that long period between youth and old age. I like it. I like it a whole lot better than assuming you’re at the halfway point. Because as vibrant and kick-ass as I am, I’m sure as hell not going to make it to 116.