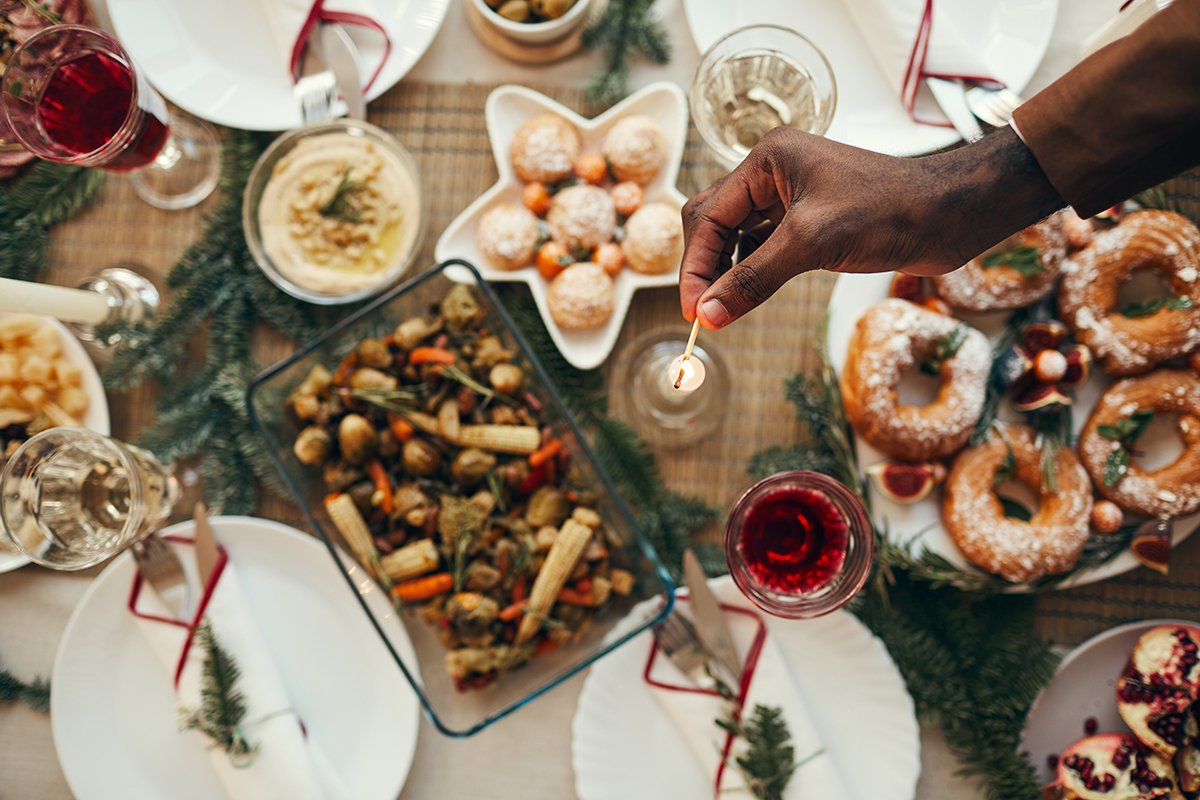 The Number One Thing To Do Minimize Holiday Weight Gain

Going into the scale-tipping season known as Thanksgiving to New Year’s, the typical mindset is to amp up workouts, cut calories, and stick to crudités at parties to dodge those extra holiday pounds. But who actually does that?

This year, dare to be different: Rather than take on unrealistic demands during an already stressful time, focus on only one thing that will help you look better, feel less tempted by party food, have more energy, and brighten your mood. The answer is as simple as sipping more water.

“Drinking water is the silver bullet for many of the challenges we face during the holidays,” says nutritionist Kate Geagan, a CamelBak hydration expert and author of Go Green Get Lean. Fact is, we don’t give H2O enough credit and it can have a dramatic impact on your overall well-being. When water levels drop in your body, even as little as 2%, you may start to see some side effects, from overeating and weight gain (you may mistake thirst for hunger), bloating (dehydration increases fluid retention in your body), trouble with digestion (it may lead to constipation), low energy, a negative mood, a headache, and dry mouth.

Even if you’re already well versed in the benefits of drinking water, your intake still probably falls short. During cold-weather months, you’re more likely to be dehydrated because your body is not releasing sweat like it does in hot weather. In fall and winter, the demand to stay hydrated is still present, but just a little more subtle. Without sweat to trigger the thirst response, you just might not seek water, says Ivy Branin, a naturopathic doctor with a practice in New York City.

Holiday stress also contributes to dehydration, and vice versa. “If you’re in fight-or-flight [mode] and your heart is beating faster, you’re losing water more quickly,” Geagan says. Stress can, therefore, lead to dehydration, she explains, which in turn, can cause your blood volume to drop and allow the stress hormone cortisol to have a greater impact on your system.

At that point, your body is dealing with so many competing demands, it ignores thirst signals, making matters worse. Then a headache kicks in as a result of your blood volume decreasing. That means less blood and oxygen are flowing to the brain, says Branin.

Additionally, as little as 1% dehydration may negatively impact your mood and concentration, especially during or after a moderate workout, according to a study of women published in the Journal of Nutrition. And research on men printed in the British Journal of Nutrition discovered that mild dehydration decreased working memory and increased tension, anxiety, and fatigue.

The upside is that drinking H2O can replenish you mentally as much as it does physically. “Water improves the processing of brain chemicals, such as serotonin and dopamine. We know that low serotonin can result in anxiety, worry, depression, insomnia and also afternoon and evening cravings, while reduced dopamine is associated with low energy and poor focus,” says food mood expert and certified nutritionist Trudy Scott, author of The Antianxiety Food Solution. “So drinking water could give you a much-needed boost and lead to less overeating for a pick-me-up,” she adds. Power through these demanding days by staying hydrated, and you won’t need your 3 p.m. vanilla latte (bonus: 200 calories, eliminated like that!).

While water is no magic potion, a steady stream of it could help keep you from ballooning during holiday binge-fests. Several studies have long supported H20’s slimming effects. One in particular found that those who downed two glasses before a meal lost up to four pounds compared to those who didn’t guzzle the extra agua prior to eating. “Water makes us feel full by adding extra volume to our stomach; it can help us feel less hungry so we eat less,” Branin says.

Not only does water make you put down the high-cal eggnog, it can also help you feel satisfied. “Stomach distension is registered by the brain as a short term satiety signal,” says Branin, who confirms this strategy works best when you have some food in your system (water alone will be emptied and absorbed in the small intestines within about 5 minutes). Ten to 15 minutes before you head to the office party, where you know you’ll eat some pie and gingerbread men, Branin suggests throwing back about 16 ounces of room temperature water to keep your consumption under control.

Water’s amazing benefits don’t end there. Drinking water is the easiest, cheapest way to score firmer, younger-looking skin. Cold air sucks the moisture right out of your skin. Stepping in and out of heated buildings-your home, office, or the mall-isn’t doing your permanent outer layer any favors.

“Heated areas can make dehydration worse because they are basically creating desert-dry environments, causing the fluid in our body to quickly evaporate,” Branin says. “To counteract the effect, drink water to replenish skin tissues and increase skin elasticity, and, when possible, use a humidifier to pump more moisture into the air. It is also important to use Shea butter or coconut oil to seal in moisture in the skin,” she adds.

Before you go chugging eight glasses a day, however, know there no real science to support that specific number. (Click here to find out if you’re drinking the right amount of water.) The best way to gauge if you’re drinking enough for your body is to make sure that your urine color looks more like lemonade rather than apple juice throughout the day, says Douglas J. Casa, Ph.D., chief operating officer and director of athletic training education at the Korey Stringer Institute at the University of Connecticut.

The Number One Thing To Do Minimize Holiday Weight Gain was last modified: December 22nd, 2019 by BA50 Talkers