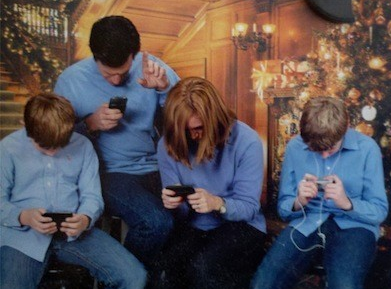 Last year we got our motor boating licenses. My husband and I bought an old, much-dented boat for our leisure time. We would learn together how to navigate and dock, which, it turns out, is really important. A true waterman can swing a long boat into a short space without so much as grazing a hanging fender, regardless of the current, the wind, the swells or the spectators who watch from marina restaurants or from other boats. Docking in public is as intimidating as teeing off on the golf course when the groundskeeper is watching. We were going to attend a boating course, but then my husband discovered an online app that teaches everything you need to know about boating, from navigation to small engine repairs to docking. We huddled together in the cockpit studying the illustrations and watching the videotaped demonstrations on my husband’s new iPad.

I bought that iPad for him last year thinking he’d enjoy uploading photographs and reading a news article now and again. There was no way to prepare for the immediate dependency he’d establish with this device. He took it everywhere. Everywhere! When it went missing the first time, a manhunt rivaling the search for bin Laden commenced in my front rooms: coats flew from closets, papers, stamps, tubes of Chapstick and change from several countries disgorged from drawers. Even the garbage can was upturned. It didn’t bother me that it was missing. I knew he’d find it eventually. While he raced from room to room, I filled a bowl of Phish Food ice cream and lavished in the sound of his voice (even though it was tight and littered with expletives). Why was I so desperate for his voice, you may wonder. Because, by then, the children had brought Words With Friends into our home, and our interactive existence had completely collapsed.

We used to be a game-playing family. We played cards: pitch, poker, gin-rummy and bridge. We battled over Pictionary, Stratego, Trivial Pursuit. But not any more. Now, the house is silent except for the incessant clicking of keys. No more loud taunts from upstairs to down. No more wrestling on the floor during sports timeouts. Instead of living, they are playing Words With Friends. All of them, all the time. They play during dinner. They play during Jeopardy. They play in restaurants, in movies, while watching ESPN and while riding in the car. They even played during the NCAA basketball finals! It matters not at all that my husband hates to play conventional Scrabble. He stinks at word games, he’ll tell you that himself. He barely survives Hangman. But Words With Friends — that’s different. Like our children, he is thoroughly addicted.

I am alone all the time and I don’t like it. I don’t understand the allure of the game. Why remain glued to a screen when you can play with live, multidimensional, real people?

Last night I flew on an airplane next to a Federal Air Marshal with the Federal Aviation Administration. When the flight attendant announced the use of electronic devices, he quickly loaded Words With Friends.

“You like that game?” I asked, somewhat skeptical. You’d think a Federal Air Marshal would have a lot on his mind while on duty.

“I’m addicted to it,” he admitted.

As the horizon faded behind us, I wondered. What if something happened on the plane while the Marshal’s attention was affixed to his screen? Would he be able to disconnect even if it was “his turn?”

At home, I hear myself asking the same question five and six times a day. “Who are you playing with?” My husband plays with our kids and his mother, and with friends he hasn’t spoken to in 30 years. My children play with… how would I know? Perhaps they play with Katie Couric, or Jon Hamm. I hear he’s also wild about the game. Why is everyone so enamored of a game that demands the utter absence of human contact?

Sometimes, their zombied excitement reminds me of the evil Nazi treasure hunter/henchman in Raiders of the Lost Ark as his eyes behold, revealed for the first time in centuries, the glorious contents of the Ark of the Covenant. And then his face melts off.

Yesterday, my husband spoke to me. “Is Feh a word?”

“Not in English,” I answered, smug.

He studied the screen for a while. “Wrong,” he announced with a laugh, turning the iPad to me. “The game accepted it. Feh. See? Fourteen points.”

“But it’s not a real word. Look it up. Check the OED. And Websters.” I was eager to prove my superiority in verbiage but did not have a dictionary on the boat.

The iPad chimed, and he quivered with new enthusiasm. “Aha!” he said, his eyes glowed with blue light. Someone else had played a word. He stared with the shine of new love glowing in his eyes. He was hooked. They were all hooked. I felt like the last sentient being alive.

Water rocked the boat. I looked out over the expansive vista, noting the glory of nature. He looked at his tablet as if it held the very meaning of life. For a while I stared, waiting with passive trepidation for his face to melt off, but nothing happened. I sighed and closed my eyes.