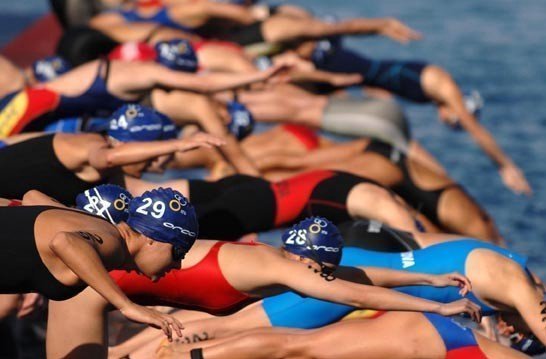 Winning Combination – A Goal and A Coach

I first became aware of the importance of goal setting when I trained to become a business coach for entrepreneurs.  The process required creating 12 week goals that made my heart flutter with excitement at the challenge –the thought of a  Sprint Triathalon had me in hyper-flutter.

My next goal was to get 3  clients and teach them the process. After that I was determined to stretch myself with big challenges using the goal setting process to drive me to the finish line.  Each goal was laid out and tackled.  My coaching practice grew and I celebrated my success as I notched myself forward. The goals were measurable and satisfying. The process worked: set goals, develop strategies and commit to weekly action steps.

Last year I needed a physical goal as I had just gone back to work full time for someone else!  Suddenly I would be the employee after running my own show for my entire career and I was worried that I would not be able to structure my day to include my beloved sports. I wanted to work out with other people and I preferred being outside to gyms. My dearest friend in Boston gave me the name of her athletic coach.  I spoke with my sister Julie and she told me about a Sprint Triathalon in Fairfield County in September (it was May at this point).  I am not a swimmer, I am a jogger not a runner but I have been biking my entire life.  So I signed up for the Tri and hired a coach.

I found Coach Cathy who became my task master, motivator, and cheerleader.  We started working out on the track at Harvard with her Liberty Running Group (largest running group for women in the U.S.). Realizing I couldn’t get to the track every Tuesday night – knowing also I was not a track person and not into the speed stuff – I hired her privately.

When I first went to Cathy the only thing I felt certain of was … I needed help!  I wasn’t even certain my goal was something I was that crazy about but I knew I needed a goal that stretched me.  A triathalon had never been on my agenda but there it was – MY GOAL for the next 3 months.

Physical exercise has always been my drug of choice. My moods are lifted after a run, bike ride or 45 minutes of vigorous activity. When I am jumpy or unfocused or anxious – the exercise outlet always, and I mean always, works to ground me.

Starting my new job was going to be stressful – that I was sure of.  I needed an outlet and I needed to impose discipline around my exercise because I had a 5 day a week work schedule that could creep into a 24/7 commitment and I knew I would not be able to sustain that without getting in a work out routine.

Coach Cathy and I put together a weekly running schedule and she was adamant about me keeping track of my miles. I had to get a notebook, write down my daily plan, and write down whether or not I achieved it.  I had to then share that with her each week. We set out a mileage plan that would take me to the Triathalon.  I made a pact with myself to do it and this required a few key elements:

Number One: I needed to be fully committed

Number Two: I needed to be fully focused and, as Steven Covey says in the “The Seven Habits of Highly Effective People” I needed to put first things first. I needed to make this a priority.

Number Three: In making this a priority I needed to make choices about distractions. To create the space for my training. No excuses – including weather, social events, friends. Nothing was to get in the way.

Ok that sounds easy but it wasn’t.  Set a goal – stick to it –focus – no excuses – show up over and over  – do it and celebrate.

So you may wonder what happened to me at my very first Sprint Triathalon.

The Event Day next entry…

Winning Combination – A Goal and A Coach was last modified: February 21st, 2012 by Felice Shapiro