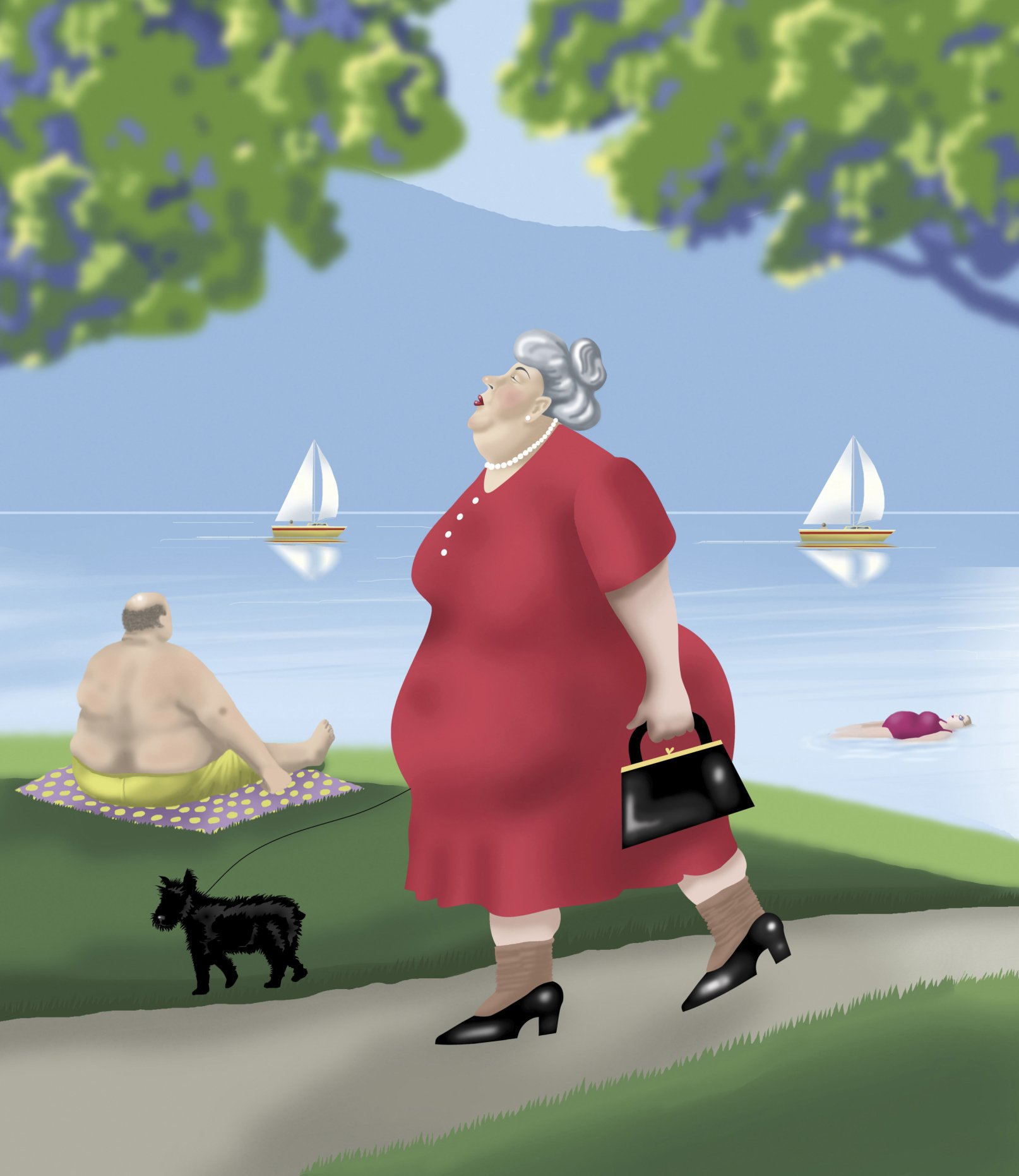 Why The Boys Are Still Whistling At Me…I’m Too Sexy?

Time to walk the dog! I laced up my walking shoes, pulled a sweatshirt over my head and headed out. My dog, whom we call Mr. Potato Head due to the cornucopia of traits he inherited from beagles, fox hounds and, we think, kangaroos, led the way.

I live in a bustling area of the city, surrounded by hotels and restaurants and shops, which translates to … traffic. At rush hour, cars move with the speed of peanut butter through a straw. This is my favorite time to walk. Nothing makes me happier than the sound of road rage when I am not in a car.

At the first corner, we stopped to sniff a garbage can. The dog, not me. I watched as a BMW tried to skirt thru a yellow light without success. The horn honking decibel level rose to SST jet proportions. I stuffed the ear buds into my ears and meandered across the intersection, trotting as happily as my dog. At the far curb, someone whooped at me. Not a road rage whoop, but a man after a woman whoop. I was flattered. No one has whooped at me in years. I lifted my chin and continued walking with a little lilt to my step. I was whooped at! How fantastic.

Past the next corner, the dog squatted down. This is the humiliating part of owning a dog in the city. I unfurled the poop bag from the nifty pouch dangling from the leash and adjusted the music on my iPod. From behind me, a car full of young men called out. “Yeah, yeah, yeah!” I turned to see four hands fist-pumping the air, a four-fisted salute. As I was the only person standing on that particular corner, it seemed reasonably conclusive that they were saluting me. I straightened my spine and bent to pick up the doo, jutting a hip in the process a la Beyonce. I’ve still got it, I thought, as I twirled the dog shit bag into a knot.

We walked to the end of the block and turned onto a parkway that deposits traffic onto one of the city’s many bridges. I stood three feet from a car’s open window, waiting to cross. The driver leaned toward the window and extended a very enthusiastic ‘thumbs up’ along with a healthy grin. I, of course, smiled in return while trying to remember what I looked like that day. Had I fixed my hair? Put on mascara?

I bounded across the street to Uptown Funk, clipping my gait to match the pulsating beat. Once I’d sashayed safely across, I jumped onto the curb using a motion I’d learned in Zumba class and side-stepped, glissaded, onto the footpath. Oh, I was so smooth! Take that, J. Lo. I shimmied my shoulders, a gesture entirely lost in that oversized light blue sweatshirt. Oh yeah, I am so hot.

The Black Eyed Peas sang, Boom Boom Pow, and with every Pow I thrusted a hip, despite vigorous warnings from the tenacious tendons keeping my joints assembled and in proper alignment. I felt like I was 25 again, indestructible and oh so attractive.

I was in mid-boogie stride, totally digging the music and the sunshine and the attention, when I heard the voice of a young man call out: “Tar Heel Nation!” I paused briefly to ascertain its origin and, at that moment, it occurred to me that I might be misreading the focus of all this attention.

And then it happened. A steady voice chanted:

The answering call was not far behind:

I was wearing my son’s Carolina sweatshirt. Carolina blue. And UNC had just secured a spot in the Sweet 16.

Why The Boys Are Still Whistling At Me…I’m Too Sexy? was last modified: March 28th, 2016 by Lisa K. Friedman