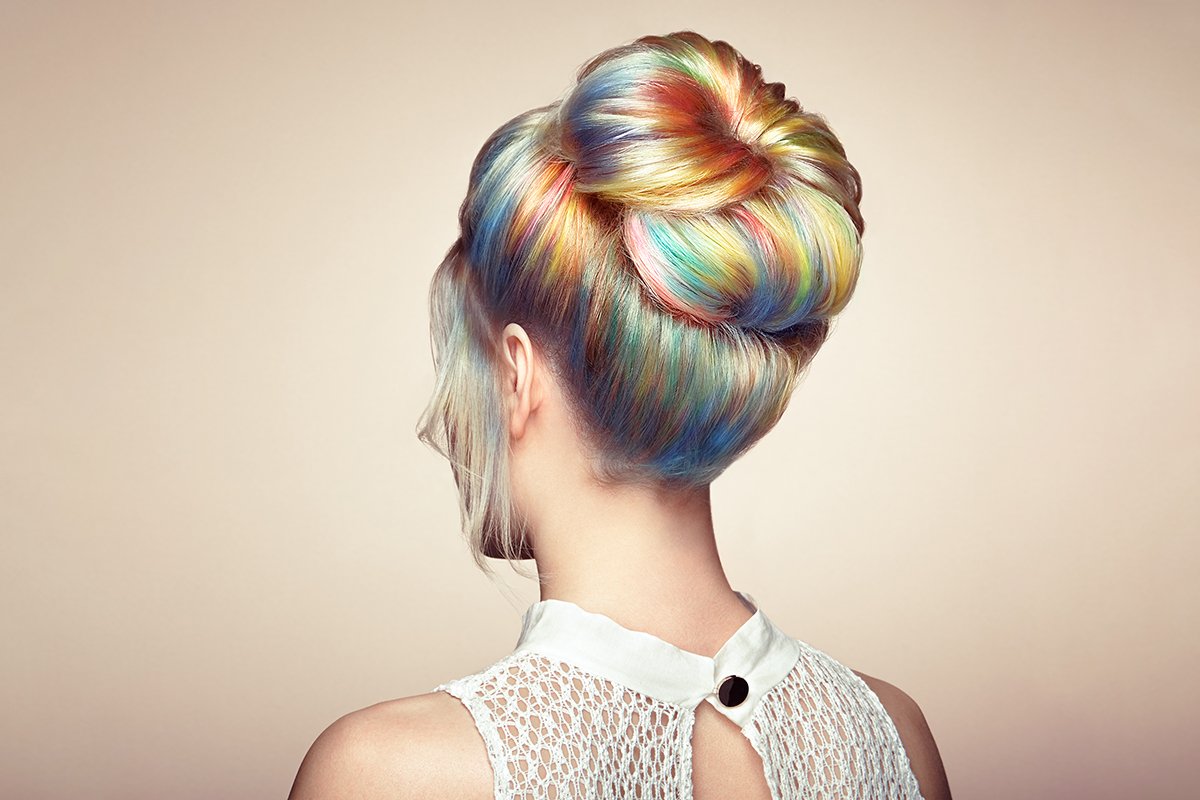 Why I Won’t Go Gray—Especially Not Now

While the world has been ending, I’m ashamed to tell you that what’s filled me with angst isn’t COVID-19, but rather, my ever-growing gray roots. In the ancient past—also known as a few weeks ago—my trusted colorist, Kit, would have turned my hair from the color of a tarnished fork to the color of pumpernickel bread as surely as the fairy godmother turned Cinderella’s tattered dress into the Elie Saab gown Sandra Oh wore to the Oscars. Oh, those were the days! But in mid-March, New York’s governor ordered all nonessential businesses to shut down. He had the audacity to include hair salons in that category.

I’m not the only one with these pressing concerns. According to Corinne Danchaud, a Paris-born, New York–based colorist who has tinted Catherine Deneuve’s locks blonde, and who currently (well, not currently) works at Serge Normant at the John Frieda Salon in Chelsea, clients were calling in a panic two days after the salon closed, asking when they’d reopen. Maddison Cave, a popular colorist at David Mallett’s SoHo salon tells me that one of her clients begged her to make a house call; another, stranded in Florida, called nearly every salon in the state, in the futile hope someone would pick up the phone. “Please don’t tell anyone that I kept my hair appointment last Tuesday,” a friend emailed the Friday after Governor Cuomo ordered New York beauty parlors to shutter. “On Wednesday they closed the salon,” she added (as if I didn’t know).

Rationally, I accept that showing a spot of gray is obviously not a life and death matter. Yet the attempt to stop the clock gives me a sense of rejuvenation, of normality and hope—now more than ever, especially as we consider real life and death matters. Short of trying to start a national hat craze, what measures could I take so I don’t look like Father Time’s wife? “Don’t highlight your hair or radically change the color,” Cave advises. “That should wait until after the world reopens.” The simplest fix, according to the many people I solicit in my hour of need, seems to come by way of temporary root concealers—sprays, powders, and crayons that are easy to undo with shampoo. They are the Etch A Sketch of hair treatments.

I start with Oribe Airbrush Root Touch-Up Spray. “It’s the best, and I’ve tried everything,” one friend insists. Packaged in an elegant canister that resembles a brown cigar case, the atomizer leaves Advil-color dust flecks along my scalp that are not for me, so I move on to a similar product from dpHue. It blends well with my hair, which is roughly the color of brown M&M’s. The applicator is cleverly outfitted with a short ultrathin plastic nozzle too, so you can lock it into place for a more targeted application. “That’s a keeper,” my boyfriend says when I show him the results. It is unclear whether he means the root cover-up, or me.

“The trick to applying these sprays is to hold the nozzle six inches from your head and constantly move the can,” Cave tells me as I struggle to perfect the application. Maybe I’m just an imbecile at handling nozzles, which is why I appreciate Color Wow’s densely pigmented Root Cover Up powder. In a pre-pandemic pinch, I’d occasionally dab dark brown eye shadow on my part to hide the gray. It works. Color Wow works better. This convincing camouflage washes off with shampoo, but will stay on for days—even if you go swimming, which nowadays seems possible only if I build a pool in my living room. Want to look like Jennifer Lopez? You can’t. But you can use the same trick that Chris Appleton, her longtime hairstylist, uses to maintain her honey-hued mane: Streak your hair with a lighter or darker shade of Color Wow powder to create the look of highlights or lowlights.

But such visual deception can save the day only until your roots become too long to sustain it—about three months, says colorist Marie Robinson—even if you’re J.Lo. “These products and techniques are only meant for an inch or so of root,” confirms Robinson, who has eponymous salons in New York and Miami and clients such as Scarlett Johansson and Emma Stone. “Beyond that, it just gets too messy,” she adds. With much more social distancing looking likely, Robinson tells me I have three options: Semipermanent, demi-permanent, or permanent hair color, which sound awfully close to the three stages of a relationship.  Semipermanent dyes coat the top layer of your hair, a protective sheath called the cuticle, but since their chemicals do not penetrate the middle layer (the cortex), which determines the color, they will not completely cover your grays. They will, however, blend with them, adding tone and shine that can last up to six washes. Demi-permanent dyes contain a small amount of peroxide, so the formula is able to penetrate the cuticle, and subtly color your hair, lasting between 12 to 24 shampoos.  If you’re no more than 50 to 60% gray, demi-permanent is the way to go, suggests Danchaud. But if you’re a professional colorist—or a desperate woman like me who is nearly all gray and trapped inside her home—permanent color, which does not fade over time, is your best bet. Go-to brands, such as Clairol Nice N’ Easy Root Touch Up, which has been making the rounds on Instagram (and is out of stock in my shade on Amazon), contains the harsh chemical ammonia, which swells the cuticle, opening up the imbricated scalelike proteins so the dye can sink in. (Brands such as Madison Reed and Garnier offer ammonia-free formulas, although the alkaline chemicals that replace it can be equally corrosive, I’m told).

As there are no do-overs with permanent color, there is great risk in picking the right shade. “My advice is to message or DM your colorist, and ask, ‘What brand do you use and what color should I buy?’” Appleton suggests, which is the smart alternative to what I would have done: Choose the box based on the retouched photo of the model I most would like to look like. Danchaud also advises choosing a color that is one shade lighter than the picture on the box, which will also be easier for your real colorist to correct when you are, sigh, reunited.

Imagining that I’d turn my hair plaid—or worse, stain my entire bathroom—I opted for a customized permanent color kit from Color and Co. to remove some of the guesswork. Free video consultations with bona fide hairdressers and a L’Oréal-incubated algorithm helped launch the online start-up last year—talk about a tech-based beauty solution that’s perfect for the quarantine era! “We’re seeing a lot more people who want reassurance from licensed professionals,” cofounder Deb Rosenberg, a seasoned colorist, tells me during our video chat as she assesses my color. Rosenberg recommends a “warm beige” shade, and gives me tips about how to use my bespoke formula (hold your camera’s phone up to the mirror to effectively get the back of your head), which arrives at my doorstep a few days later. Still nervous, I procrastinate before placing a huge garbage bag on the floor, and turning on an easy listening station on the radio, just like they do at my salon. The process was easier than I’d imagined. I poured the color into the developer, shook the bottle, and squeezed its contents onto my scalp. For your benefit—and, okay, mine too—I wanted to leave room on my head to try another brand for comparison, so I treated only a small patch above my ear. After 35 minutes, once the color had set, I rinsed. Based on a “before” selfie I had sent Robinson, she had a hunch the shade would be a smidgen too light. She was correct. Taking stock of a follow-up photo, Robinson suggested I treat the rest of my head with dpHue’s Root Touch Up Kit in medium brown.

The challenge for me is applying the dye systematically in straight rows. I give up. And forget tackling the back. Anyway, what I look like in the back is other peoples’ problem. The directions recommend leaving the gook on your head for 45 minutes, but adding an extra 10 to 15 minutes if your hair fibers are thick and resistant to color. Mine are stubborn as a two year old, so I sit for 55 minutes, trying to will my strands not to drip. The result? Let’s just say, I considered giving myself a tip.

All dyed up, with nowhere to go! Still, I have felt much better looking in the mirror in these continued days of quarantine—and also smug about my abilities to go at it alone like Robinson Crusoe. Nevertheless, when we are once again allowed to enter the world, I will go straight to my colorist, and I hope you will go to yours too. They have been so generous as their doors shutter, fielding our DMs, and follow-up calls, and persistent emails, while offering virtual guidance on every platform imaginable. (Don’t hesitate to Venmo your gratitude.) Besides, Kit wouldn’t have overlooked that small section along my part.

Why I Won’t Go Gray—Especially Not Now was last modified: April 16th, 2020 by BA50 Talkers