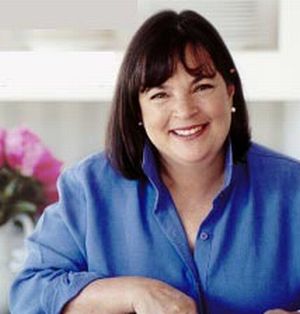 About ten years ago, with my permission, my husband mounted a small flat screen TV on an adjustable arm above the counter in our kitchen. We broke a strick family rule:  “no television in the kitchen,” and substituted a more lenient one:  “no television during meal times.” With the TV in the kitchen, I thought I would catch up on a little news while I made dinner, but I worried a bit that I would have to fight with my kids to shut off the “idiot box” and read a book.

But that’s not what happened.  In my attempt to abate the drudgery of daily meal prep, I actually fell love with watching other people cook. To say that I was Food Network obsessed might be a bit of an exaggeration, but the week that I was stuck home with a sick kid, making gallons of tea and chicken soup, I dropped CNN like a lead matzoh ball, and spent hours each day with new friends Bobby, Giada, Paula and Rachael. It was then that I met and fell in love with the Barefoot Contessa.

Ina Garten was born Ina Rosenberg on February 2, 1948 in Brooklyn, NY. She shared a birthday with my eldest child, so of course we bonded. I wondered how a little Jewish girl from Brooklyn became a Contessa.  After all, I wanted to be a princess when I was little, and I certainly would have settled for a lesser level of nobility, but nobody asked.  I came to love everything Ina.  I bought all of her cookbooks, as well as a microplane for the Parmesan cheese, some real vanilla bean, and a dozen white ramekins.

Like old friends, Ina and I cooked together most weeknights.  Ina chopped, sauteed, mixed and stirred in her easy breezy style in her gorgeously clean kitchen, pouring pre-measured ingredients nonchalantly into the bowl of her food processor.  She’d be wearing her denim shirt, and a kind smile on her Valentine-shaped face.  Ina would cook happily for the ladies of East Hampton, or for a friend’s daughter returning from France, or maybe just for a quiet weeknight dinner with Jeffrey, and everything was perfect.

I cooked in a desperate attempt to get something in the oven before I ran out for the late Hebrew School carpool. There was usually a dusting of flour down my shirt, oil splattered on whatever piece of clothing was my newest acquisition, and when I cleaned the counter, there were always a few Yellow Lab hairs stuck to the sponge. While Ina tasted her dish for seasoning with a clean wooden spoon, I ate my “pre-dinner”- an entire days worth of calories in the tasting.  All the while, Ina exuded calm.

I loved that Ina unabashedly used a little fat and a little cream, but not in a “let’s put a hamburger on a donut” kind of way like the infamous, soon-to-be-diabetic Paula Dean.

I loved that before Ina opened her specialty food shop in 1978, she was a nuclear energy budget analyst for the Office of Management and Budget in the White House.  Ina oversaw the budget of the Nuclear Regulatory Commission during the Carter administration.  And yes, I admit it, when I found this out, I hated her just a little. But who could blame me?

I loved how her recipes made me look good–how I could make a chocolate brownie pie or an arugula salad with roasted squash and toasted walnuts look just like it did in her cookbooks.  I loved the oohs and ahs from family and friends when I made one of her recipes, like I had something to do with creating it.

I loved how Ina seemed perfectly content to be fat.  I loved how she planted a flower or two, but you never heard her talk about running out to the gym or even skipping dessert at breakfast.   For goodness’ sake, Ina made oatmeal with whole milk!

Ina is not a supercilious asshole you love to hate, like Martha.  She is not sexy in her low-cut tight shirts, like Giada.  She does not say annoying things like “EVOO,” like Rachael.  She is not boring like that tall thin lady who does the shortcuts, whatever her name is.  And she had bangs way before Michelle Obama made it cool.

Ina gets away with not ironing her napkins.  So why, oh why, can’t I?

She has a really cool barn, and great gay friends.

Ina manages to be fabulous without making me feel inadequate.  I would just like to be a little bit more like her.  So, happy Valentine’s Day, Ina! You are an inspiration.

Why I ♥ Ina was last modified: February 5th, 2013 by Ronna Benjamin