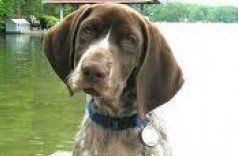 My brother and his wife recently put their beloved German Shorthair to sleep. Dudley was ready. (The photo is not of him.) Bro said Dudley told them when when it was time, and they put him on a blanket in the yard and gave him the blue juice (my sis-in-law is a veterinarian.) I am sure they petted him and cried, but it sounds like a pretty good way to go. Dudley died with the sun on his flanks, the smell of grass in his nostrils, and the love of his family all around him. I wish we humans would permit each other such a sweet farewell.
Of course, that’s not how we do it, because human life is more valuable than dog life, and the risk is too great. Instead, we pull out all the stops to keep each other alive in spite of great illness, pain and struggle. Or at least that’s how the general public handles it. Doctors? That’s another story.
In this article entitled How Doctors Die by Ken Murray, a cardiologist reveals that doctors are so averse to the normal life-saving techniques visited on the dying that they even go so far as to have No Code (i.e., no CPR) tattooed on their bodies. Here is one reason: did you know that in order to properly conduct CPR on a patient, ribs are usually broken? How’d you like your old mom to have to deal with that? Here’s an excerpt:

Almost all medical professionals have seen what we call “futile care” being performed on people. That’s when doctors bring the cutting edge of technology to bear on a grievously ill person near the end of life. The patient will get cut open, perforated with tubes, hooked up to machines, and assaulted with drugs. All of this occurs in the Intensive Care Unit at a cost of tens of thousands of dollars a day. What it buys is misery we would not inflict on a terrorist. I cannot count the number of times fellow physicians have told me, in words that vary only slightly, “Promise me if you find me like this that you’ll kill me.” They mean it. Some medical personnel wear medallions stamped “NO CODE” to tell physicians not to perform CPR on them. I have even seen it as a tattoo.

I have had more surgeries than your normal 57-year-old, and were it not for these surgeries I’d have been dead several times over. I think I have a bod that’s inclined that way, so I think about things like this, and if I were to receive a grave diagnosis, I’d forego all the extreme measures and enjoy the rest of my time on earth. What a privilege to have enough advance notice that you could get your files in order (shutting down all my online accounts would take days!) and lay the groundwork for sending your loved ones off into the future comfortably instead of torturing yourself with toxic chemicals and premature hospitalization.
Of course, the problem is that medical knowledge is incomplete, and we can’t often say with a high degree of certainty that all efforts are useless and we may as well go quietly, but if I were lucky enough to get such certainty, I think I’d rather get the blue juice. Wheel me close to the window, hook me up to the morphine, and adios, muchachos.
I hope I didn’t bum you out but I believe this topic deserves more attention. Now that I’ve raised the issue, I’ll drop it. The sun’s coming up, the day is young, and we’ve got livin’ to do.
Death With Dignity — Like Dudley was last modified: October 29th, 2012 by Lynne Spreen