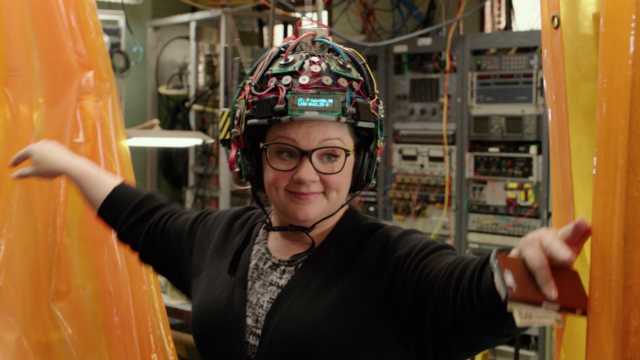 Who ya gonna call? Well in 2016 it’s the all-female GHOSTBUSTERS, a re-envisioning, if you will (and many wouldn’t), of the 1984 cult classic played by a fabulous foursome: Melissa McCarthy, and SNL’s Kristen Wiig, Kate McKinnon, and Leslie Jones. This all woman cast–plus one token pretty boy hired as a receptionist for his looks and awkward dance moves (a riotous Chris Hemsworth) are hilarious, perfectly cast, and cook up some major chemistry as they tackle a slew of slime-spewing specters infiltrating Manhattan.

In this parallel universe, Melissa McCarthy is a brilliant inventor of paranormal-tracking apparatus at the fly-by-night “Higgins Science Institute” (the Dean is of course played by Jimmy Fallon’s talented “Tonight Show” sidekick Higgins.) Kristen Wiig plays a straight-laced doctor of particle physics and first victim of a sudden and extreme “ecto projection.” Kate McKinnon is a crack(ed) scientific engineer spewing a constant stream of uproarious asides. When subway worker and street smart New York historian played by Leslie Jones joins the team and shows up with her uncle’s hearse–which may or may not contain a corpse–McKinnon deadpans, ” I can think of seven things to do with a cadaver TODAY.”

Director Paul Feig (“Spy,” “Bridesmaids”) balances the comedic skills of these actresses in a brisk, topical script laced with one-liners which Feig co-wrote with Katie Dippold (“Parks and Recreation,” “The Heat”). Send more Kate McKinnon. The team must figure out how to stop someone with a device that will amplify paranormal activity all over Manhattan and they set out to trap apparitions which can even take over the human body!

In between, the script finds a clever way to come up with the ghostbusters logo, and to involve cameos by many of the original 1984 team. Bill Murray turns up as a world famous, cane wielding paranormal de-bunker. Dan Aykroyd pulls up in a cab, Sigourney Weaver and Ernie Hudson make sudden brief appearances before it ends, and fans are sure to spot a discreetly placed bust of the late writer/actor Harold Ramis in a haunted hallway.

In fact, the original franchise fizzled after 1989’s GHOSTBUSTERS II disappointed and a long-batted around third installment was finally put to rest after the untimely demise of original writer/star Ramis in 2014. This reboot while not a perfect film (one big scene at a rock concert didn’t know when to quit and had no pay off) or even a necessary one, is nevertheless a decently entertaining summer movie, but for some reason became the object of a backlash of biblical proportions. A rabid minority who either hate women, or hate reboots (There’ve been many, so why pick on this one?) singled out the film for scorn when it was still a concept, and after it was completed, made its trailer the most disliked in the history of YouTube. Leslie Jones has been slimed with racist tweets and Donald Trump, with his finger ever on the pulse of all things angry, took the time to dump on the ghost-hunting gals. He’d have been better off hunting down and heading off whoever ghosted Melania’s speech, a spooky reboot of its own.

GHOSTBUSTERS doesn’t have a ghost of chance of saving this lackluster summer movie season, but it’s a chance to see some of the best comedic actors working today have a little fun while we’re all waiting for SOMETHING of biblical proportions to hit the big screen– before the fall.