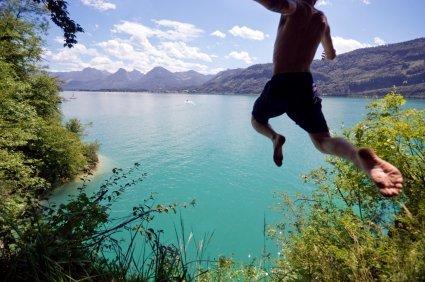 What’s The Worst That Can Happen?

“A ship in port is safe, but that’s not what ships are built for.”

I’m convinced that the world is divided between those who leap over walls, go out on limbs, dare to think out of the box… and me. I grew up having meatloaf every Wednesday, going to the Loew’s Kings every Saturday afternoon, getting to sleep seven days a week at exactly the same time. Taking a risk was well, risky, and too far away from familiar and safe to be worth the trip. So when, on the spur of the moment, five days before Christmas, my daughter called to say a ticket had just become available for a premiere that night where there was a good chance I’d get to meet George Clooney, every square inch of me screamed, “just say no!”

There were mitigating circumstances. I was already in Manhattan, visiting a friend in a downtown hospital. I was dressed in a sweats-like outfit and so-wrong shoes. I’d have to fight nightmarish gridlock and brand new unfamiliar cross street regulations to get to the theater across from The Plaza. There were three hours between the phone call and the time we’d meet up at the movie. And I’d never get to the five remaining things on my to-do list for the day.

Those of you who have a tattoo probably won’t understand. Likewise those who choose Viet Nam as a vacation destination or participate in triathlons. What could be so daunting about traffic? How can it be a major problem to occupy yourself in the greatest city in the world for an afternoon? Where is it written that anything on that list couldn’t be postponed for a day? Because you’re thinking logically, you miss the point. I have lived all these many years handicapped by an irrational fear of spur-of-the-moment.

I sit here racking my brain to come up with times in my life when I’ve acted spontaneously. There must have been some experiences… and they must have led to fear and embarrassment and hurt… otherwise why my stress? But if I can’t remember them, how bad could they have been?  Maybe in the  60s and 70s, my formative years when opportunities to be flexible should have been welcome, I chose instead the comforts of being supported, insulated and isolated from change. Maybe it’s simply a matter of never practicing strengthening the muscle that activates courage and supports taking chances.

My daughter, brought up loving roller coasters, traveling through Europe alone, and barking orders at every intimidating person who deserved to be barked at, was astounded. To her, adventure is heart-pumping; not the heart-palpitating affair I turn it into.  She’d wear sneakers to a premiere, confident that not a soul would be looking at her. She’d never deny herself the experience of shaking hands with the world’s handsomest man because she didn’t know where to park the car. She knows decades before I ever learned that only in growth and change is true security ever found.

Newspapers say that women become bolder and more independent as they grow older. I’m beginning to believe they’re right. Middle aged, middle class, middle of the road might define me most times, but it doesn’t have to be a life sentence. If I learned the computer, how to retrieve messages on my cell phone, and how to program my iPad, I can change, can’t I?

My screen saver says, “Time to slay another dragon.” And that day I did. So what if the maitre de at the restaurant at Barney’s definitely sneered at my outfit. Or that it cost 65 dollars to park. I found my way. No one noticed my shoes. I told George Clooney that I loved his work. My daughter was relieved I wasn’t totally hopeless. And the next time I know it will be easier.

What’s The Worst That Can Happen? was last modified: September 11th, 2012 by Marcia Byalick