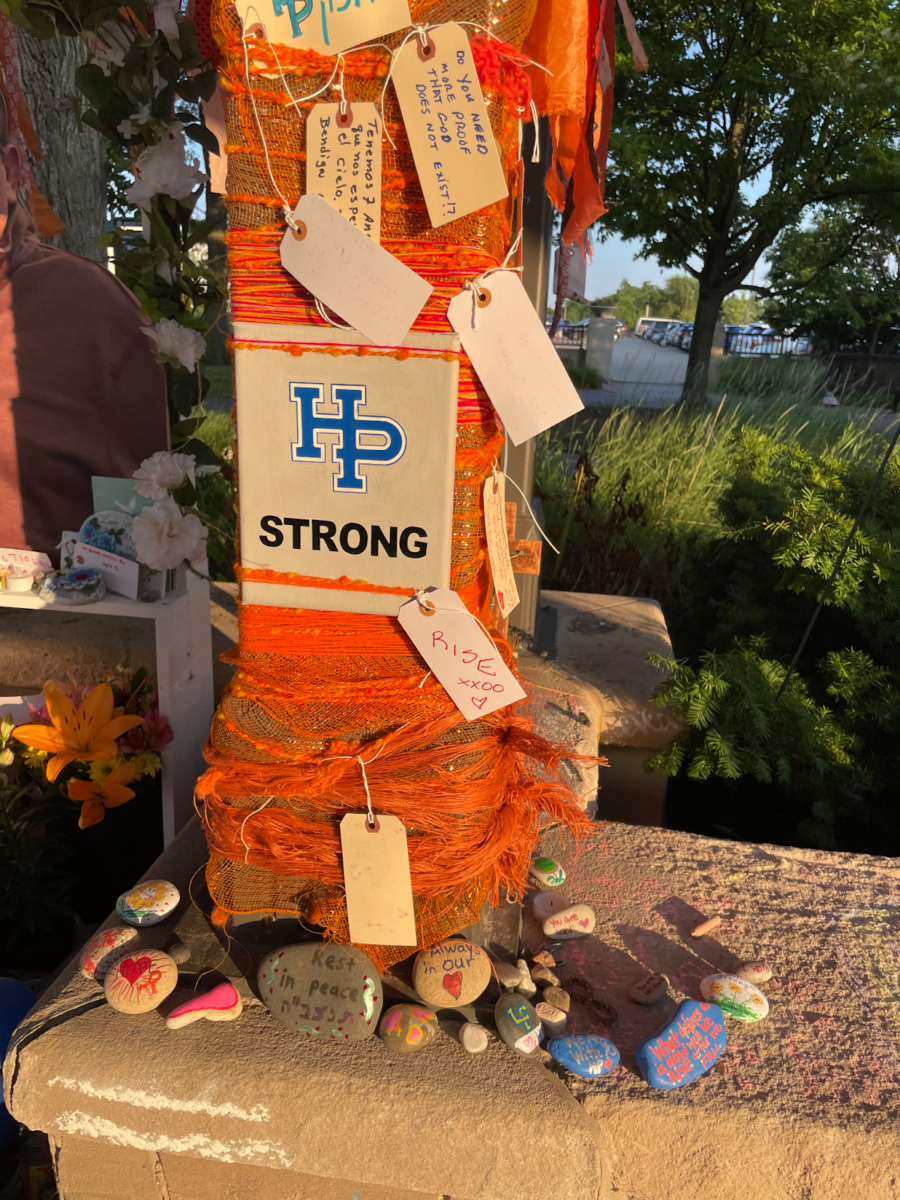 We Went To The Vigil In Highland Park

The
roll of Scottish drums began as we walked up to the vigil in Highland Park. The solem tune of Amazing Grace blew through the bagpipes as a member of the SWAT team stood right in front of us holding his rifle. His eyes scanned the crowd above our heads as
we stood there motionless listening to the speakers. Next to us stood a woman with an adorable gray dog with white paws. He started jumping up and down to get her attention. She told him to sit and he did, until a person walking through the crowd stopped
to pet him. A stranger who when finished, was no longer a stranger. The dog’s new friend continued through the crowd, moving closer to the stage.

The
mood was somber, respectful, and caring. It was a beautiful evening. We thanked the police officers that we walked by for being there. One super rad female officer had a blonde ponytail and a black super thick swag like headband. She had pink lipstick
and a thick bullet proof vest. I admired her strength and femininity. My respect for the police has grown because of their response to the terrible shootings that occurred at the 4th of July parade, especially for the Lake County Sheriff, John D. Idleburg,
who said, “It is time to take action…assault style rifles (should) be banned…they are no more than killing machines.” I would vote for him.

Before
the vigil was over we started walking towards the memorial. My daughter Kate, asked us to wait, while she went to see the line of tents on the street. While she was gone I stood looking at the crowd, a man was standing holding up a large trade show banner
covered with photos of children. There were no words on the poster, just the faces. Although I had no idea who the children were, I really did know. The faces of innocents who belonged to parents, to grandparents, to a neighborhood block. I’ll never know
their names. I looked at the man. His head bent, looking at the ground, listening, remembering, as he held up his traveling memorial. I wondered how many vigils he’d been to before this one.

Kate
came back with a stuffed animal and a blanket given to her by a Red Cross volunteer. We kept walking towards the memorial. I could see the overhang wrapped in strands of orange and black which was confusing, because Highland Park’s high school colors are
blue and white, and my town’s colors are orange and black. Then we learned orange is the color chosen by the foundation in honor of Hadiya Pendleton, a student who marched in President Obama’s 2nd inaugural parade and was shot to death at a playground in
Chicago the week after. The color orange is what hunters wear to be seen. 300,000 children have died by guns since the horrible Sandy Hook shooting. Statistics unknown to me last week. Now I wonder if Hadiya was one of the pictures on the banner that the
man was holding down the street.

We
rounded the corner to the touching site of picture cutouts of each victim. On the ground lay hundreds of flowers, pictures, notes written in chalk on the sidewalk, Mexican veladoras candles, votives with the Star of David. Two young men were placing stones
under each memorial. I looked up and someone had written, “Love from Bosnia,” on the pole. That’s when I lost it and started crying. Of all the places in the world, Bosnia sends their love. The war torn country that faced such devastation, where neighbors
killed neighbors. They were mourning for Highland Park.

Near our car we found a pop up store that was giving away yard signs and shirts that said, “Highland Park Strong.”   An elderly man was trying on a shirt asking his son if he needed a different size while his wife picked up shirts, one for each of her grandchildren.  You could see that the son was starting to lose patience with his dad’s questions, or maybe he was overwhelmed with all of it.   We made the donation and left with 10 signs.  A woman smiled as she held the door open for us.

“Well, if anyone can move us forward in the fight against gun violence it will come from organizing within this community,” I said.  My husband agreed, having grown up in Highland Park. It is a town that is vocal and progressive.  A community that supports creative expression, gifting the public with its resources for all to enjoy.   For years we’ve enjoyed all that it has to offer.  We’ve listened to everything from Beethoven to the Steve Miller Band at Ravinia, an outdoor green space music festival canopied by mature trees.  We picnic weekly in the summer, and walk the paths at the Chicago Botanic Garden located in the next town over in Glencoe.  We spent Father’s Day once in E Street, the iconic clothes store for women and girls, because that’s what my husband wanted to do on his special day, gift his daughters a present.  Highland Park is generous.

I put the sign in my yard when we got home, aching for the town where I met my husband at the softball field 4 blocks from the parade route.  The town where our business has lived and thrived for 40 years.  Where a coworker said, “for the first time in 25 years we decided not to go to the parade.”

My daughter’s words rang in my head, “It’s just eerie.”

“This is a town of movers and shakers,” I said to myself thinking about what my colorist told me at the salon two days after the parade.  “The North Shore ladies get things done, I’ve already heard so many acts of kindness and donations and GoFundMe’s that have started in literally 24 hours.”  I joined the North Shore moms group who are posting locations and times for free counseling services and help hotlines on Instagram.

Give H.P. time to mourn. The potential for action is there, waiting to happen.

We Went To The Vigil In Highland Park was last modified: July 17th, 2022 by Joan Foley