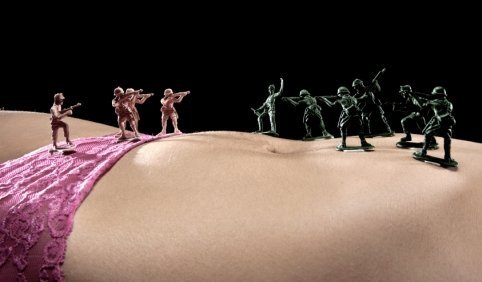 Recently at the Netroots Nation’s midday plenary, “2012 and the War on (and for) Women” in Providence, Rhode Island, Darcy Burner stated that one in three woman in America will have an abortion at some point in their lives.

This adds up to over fifty-million women. Ms. Burner went on to ask the women in the audience, if they felt comfortable doing so, to stand and acknowledge having had an abortion.  Some women stood up. Tentatively at first, then as momentum built and courage spread, women throughout the crowd stood in admission of the abortion they endured. Ms. Burner then asked all of those in the audience who supported the women standing to join them. Everyone in the room rose to their feet.

As a woman raised by a stay at home mom in the late 50s, who was told I could be and do anything I put my mind to but who was refused a credit card at 23 because I was not married (but was working), I applaud Ms. Burner challenging the war on women. However, I want to ask the audience a different question. I want to ask the men in the audience, if they are comfortable doing so, to stand if a partner they have impregnated has had an abortion. If my math is correct, if over fifty-million women will have an abortion then over fifty-million men have too. This is not a war that is gender exclusive. This “war on women” needs a voluntary draft of Baby Daddies stepping up to the bassinets and fighting with women to preserve reproductive rights.

As they say, it takes two to tango and it is time the other half enlists. When the women in the audience of the Netroots Nation session stood, an email went out by Digby, John and Howie and the Leadership of Blue America. They commented on the shame women feel in admitting an abortion by writing, “That’s not an easy thing to do in this culture, even among friends. The right has made it a dishonorable, solitary act, borne in silence, subject to fear and social stigma.”

This stigma seems to be placed on the shoulders of the mother. I see bumper stickers that say Choose Life…Your Mother Did. Come on folks, unless it is immaculate conception, their dad too. Since Freud, moms are blamed for everything. Believe me. As a “seasoned” therapist and a mom of adult kids I know this is true. The Center for Disease Control reported in 2008, 84.3% of all abortions were performed on unmarried women.

The Guttmacher Institute states nearly half of pregnancies among American women are unintended; about 4 in 10 of these are terminated by abortion. Twenty-two percent of all U.S. pregnancies end in abortion. Has a woman’s right to choose morphed into the convenient belief she is solely responsible and therefore the enemy in a war against her? We need to remember behind every aborting woman there is an aborting man. Fifty-million to be exact and it is time they stand up too.