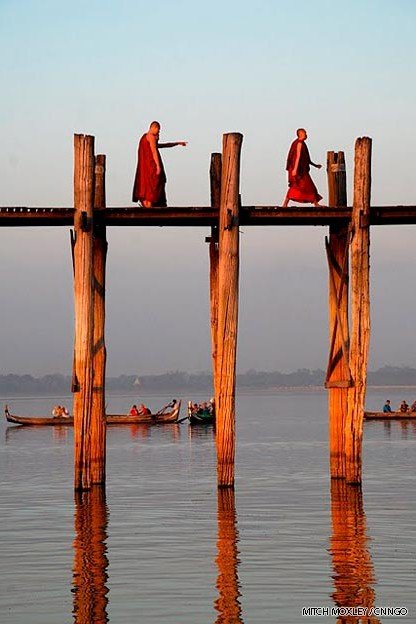 So much has happened during the past several weeks that we have been traveling through Burma. We’ve ridden an Asian elephant through teak forests up to the pilgrimage caves of Buddha’s third disciple, Alaungdaw Kathapha, danced with the tattooed Chin women in Mindat on the Chin National Day, sampled fermented sugar palm wine at a roadside stand while the palm trees across the road were tapped for their sweet sap, and laid awake most of one night listening to the nonstop chanting from a nearby monastery undergoing its annual five-day chant festival. We’ve also been the only foreigners most of these villagers have seen in years.

There’s a special beauty to this country, especially as seen over the span of many days as we hopped boats for 300 miles up the Chindwin River. Night comes softly in this part of western Burma.  Under an apricot horizon, a lone fisherman balances on the edge of his teak skiff, flings his lace fishing net in a practiced arc, silver droplets of water spraying out from its weighted edge.  A long boat trailing a dragonfly shaft sputters by, its sharp prow shattering the glassy river surface and sending brown ripples across the shallow water.

A sow roots in the sand, a dog prances above slender, naked boys taking one last joyous splash, and a farmer swims with his two bullocks, then scrubs them tenderly from nose to tail.  The trio walks up the bank, cooled and dripping, past women bathing in their sarongs, joining others already walking home, balancing the afternoon’s wash in flat bamboo baskets on their head.  A flight of herons rises to roost above small fields of sunflowers and corn.

Orange flames from small kitchen fires dance on the shore.   Wisps of music, buoyed by a monk’s monotone chant, float to mid-river.  The sun, softened by a gauzy haze, lingers an infinite moment above a far hill, silhouetting tall palms, setting the gold spike of a squat white stupa ablaze.  And then it’s gone, leaving in its wake a pearl blue dusk and a slender sickle moon which rises, a bright evening star snagged on each tip.

The pace of river travel is leisurely.  After a long day gliding past huts, small villages and local river craft, we reach a fairly bustling village port with plenty of little teahouses and a few dinner spots.  There’s always a local guesthouse where we can get a simple room.  We’re welcomed with smiles, evident curiosity at what two white people are doing so far off the normal tourist track, sometimes a word or two of English. If we’re lucky and have arrived early enough, we might score a bucket of hot water to help splash off the day’s grime.

Mornings finds us in a tea shop, where my husband Bernard gets a cup of hot water to mix his own coffee from actual grounds we bought at an open air market to the south.  The only coffee offered in the tea houses comes in foil packet pre-mixed with nondairy creamer and sugar; I happily sip a glass of black tea made rich with a generous dollop of sweetened condensed milk.

The streets come alive by 6:30a.m., as women head to the daily market, baskets slung over an arm or carried on their head. There’s lots of food for sale, though the price of rice, in all its shades and grades, is higher than it used to be, a kilo costing about $1.80. Depending on our hunger we either eat a freshly fried donut stick, which is a teahouse staple, or seek out a noodle shop for a bowl of cool rice noodles topped with fish sauce, hoisin, chickpea powder, a chopped hard boiled egg, a sprinkle of herbs and lastly, some spoonfuls of peppery chicken broth to help blend everything together.

Then its back to the dock to get on the next boat, jostling with women who clamber about hawking fried fish and chicken, bags of sticky rice or beans, sweet fruity drinks and whatever other snacks they hop the day trippers going upriver will buy.  And then we continue our slow careful glide upriver, passing by golden stupas, bamboo and thatch huts, long, low skiffs painted in blues and greens.  The boat captain maneuvers carefully around sandbars and snags, pulling up at muddy banks to deposit one or two villagers here, or pick up a small family there.

On one day, the fog is so dense and our small boat so overloaded that we run aground.  A few men hop off the boat and wade ashore to start a fire, and I see that the water doesn’t even reach their knees…and they’re shorter than I am.  So we wade ashore, too, where the fire keeps the chill fog at bay, and a handful of Siberian cranes stops for a rest and a wade en route to Australia.  A couple of hours later our rescue boat arrives, and it, too, gets stuck.  Men hop off and do some out-of-sync heaving and ho-ing, rocking and pushing the now fully loaded boat to dislodge it. Finally we are on our way again, only to get stuck twice more.  During the rains in July the Chindwin will rise a good 20 feet, but now it’s at nearly its lowest ebb and boat travel is tricky, turning that particular day from an 11 hour journey to one that took 19 hours.

As for politics, the elections are now just three weeks away. We had hoped to cross paths with Aung San Suu Kyi in Mandalay, when she was here for a political rally.  Too bad that we missed her by one day. Still, I can report optimism among common people that the loosening of restrictions within Burma will not only continue, but improve. Those we’ve talked to (with the help of our fantastic guide) are all NLD supporters.  While we waited for a flight at the tiny airport of Khamti, the local police chief chatted amiably with Bernard, something that would never have happened a year ago when he would have feared being reported for fraternizing with a foreigner…and possibly losing his job because of it.

Our backcountry forays are finished now, and we will be spending our last week in the mainstay of tourist traffic:  Inle, Kalaw, Ngapali beach and then back to Yangon on March 12.  This has been the trip of a lifetime and we are more fortunate than we realized to be in Burma at this time.