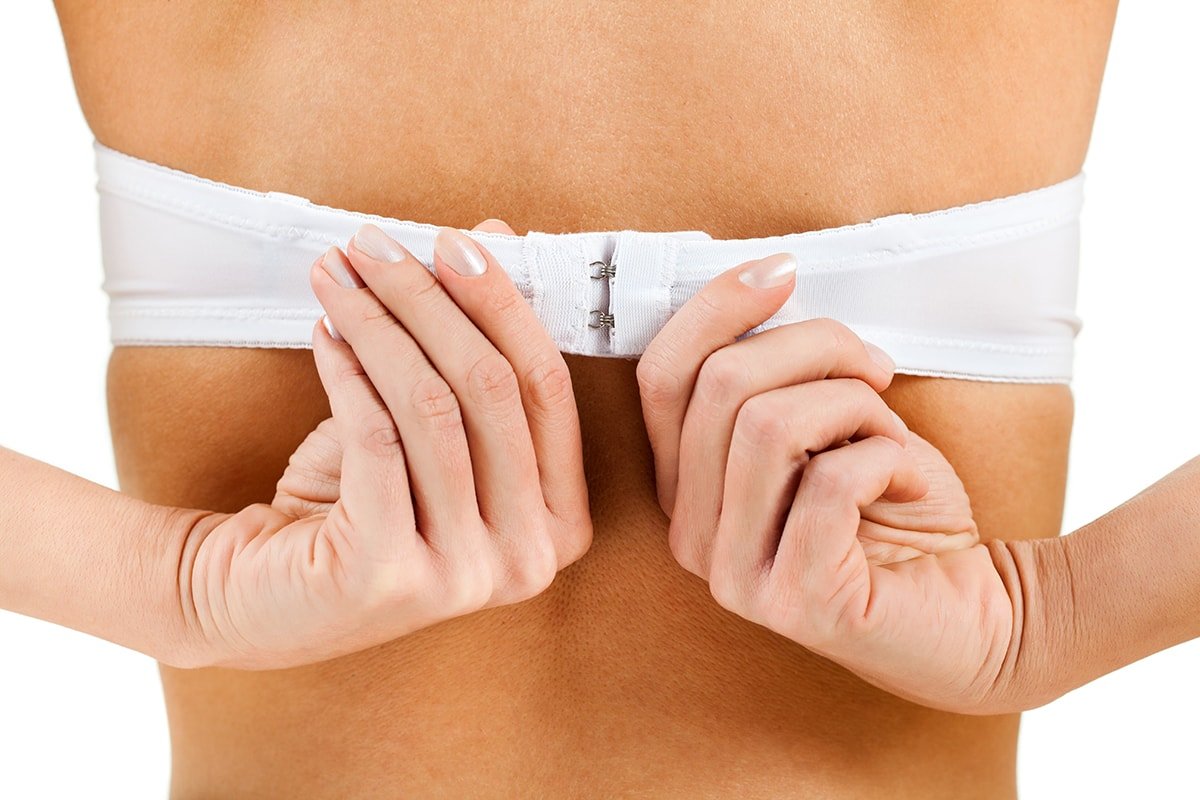 Sometimes I walk into my house, car keys in one hand and my bra in the other.

I know that I am not the only woman who, at the end of a work day, pulls off her bra (right through the sleeves of her dress), the minute she gains the privacy of her own car. I am not the only bra-wearing woman longing for an end to gasping for breath, adjusting and readjusting tight shoulder straps, and enduring the discomfort of prickly lace that brushes against sensitive skin.

Every woman I have personally spoken to agrees that she is a sister bra sufferer. High school seniors at the proms I’ve chaperoned, young women with whom I work, and friends I’ve known forever.

In addition, we all agree that our painful relationships with bras date back to pre-adolescence.

I rue the day when, at the age of twelve, I begged my mother for a training bra.

“You’ve got nothing there to train,” she said. “When you do, I’ll buy you a brassiere. (My mother never used the word “bra.”)

When I was actually ready to abandon my little girl undershirt, my mother purchased the brassiere I so coveted. However, expecting me to outgrow it quickly, she bought it one size larger, sentencing my small breasts (which never grew to my mother’s expectations) to months of drifting about in the oversized cups of my first bra.

In high school, I wore padded bras, some with more padding; others, less. The result was an unpredictable bust line. Real breasts, especially large ones, jiggle a bit under clothing. Mine, thanks to varying amounts of foam padding (one day I might be a 36B; the next, a 38 D) sat like hard lumps against my chest. I looked silly, fake.

Only once, I wore a bullet bra, popular among Hollywood movie stars like Marilyn Monroe and Elizabeth Taylor. It added a size to my small bust, but its cone shaped cups presented my breasts facing directly ahead, each honed to a fine sharp point. While other girls settled cozily against the chests of their boyfriends for Paul Anka’s “Put Your head on my Shoulder,” my dance partner, terrified he’d be run through by my weapons, held me at arm’s length. That bra went into our apartment house incinerator.

My mother bought me an underwire bra for a college formal.

“It’ll push you up, make you look like you have more than you do.”

Worse than medieval torture. All evening, the tight wire restricted my ability to fully inflate my lungs. Its edges also dug deeply into my flesh, leaving angry red welts under my breasts.

As a newly-wed, I went to a professional bra fitter in a New York City boutique who proclaimed my breasts perfectly symmetrical and shaped just like those of the Venus de Milo. Lured by the comparison to a Greek goddess, I allowed this stranger to run her measuring tape over my bare torso.

“Perfect,” she said as she hooked me into her bra of choice. “See, breasts completely nestled inside the soft fabric, plenty of support so you don’t sag, straps tight enough to stay in place. And so feminine.”

A week later, I added a back extender, gaining the inch needed to make the bra less tight. I cut off the pinchy lace edging. A small Band-Aid on each shoulder helped to relieve the pressure of the straps. Finally, totally envious of the forever braless Venus de Milo, I buried the monstrosity beneath the twenty or so other unwearable bras in my lingerie drawer.

I persisted. Sports bras flattened my already small breasts into pancakes (not a flattering look). Camisoles with built in shelf bras offered some support but the tight bands were killers. The bralette, vaguely reminiscent of the training bra my mother never bought, featured lots of trim and embroidery, but no support or adjustability.

I have had enough. I don’t want to be poked, suffocated, or chaffed anymore. If giving up a bra condemns me to sagging breasts in later life, well so be it. I don’t care. I’m done.

I admit that my small breasts make it less obvious that I am now braless. Still, to minimize attention to my nakedness, I wear loose tops, often with busy patterns. I wear a vest or sweater over thin tops. I avoid low cut dresses, the color white and, of course, see through materials.

I feel better without a bra. And guess what? I’ve become as unaware of my breasts as I am of my nose and my navel. My breasts are now just body parts. No longer subjected to uncomfortable, restrictive contraptions for the sake of society’s perception of fashion, they are finally free and happy.

As far as I am concerned, the Venus de Milo got it right centuries ago.