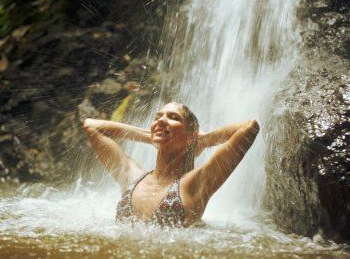 These eyes that ogled Troy Donahue, cried at President Kennedy’s assassination, wore fluorescent-like turquoise eye shadow, and looked on the passage of time mainly as a marker of young children’s growth, now view the world through trifocals. While they’re reading mail from the AARP or pouring over vitamin catalogs, they’re taking note of the fact that it’s pretty terrific to still be a baby anything, even a cutting edge boomer. To those who join me in noting how young policemen suddenly appear, I offer some thoughts on turning, as Emily Dickinson said “not older with years, but newer every day.”

Participants in a recent Psychology Today study chose 32 as their ideal age. Not me. At that time, a necessarily regimented life controlled my every move. I answered to so many masters then that months went by without an hour to read a book or take a bath. Priorities and expectations were different, and while I don’t regret any of the choices I made, I’m relieved that that most unselfish stage of my life is over.

No longer must I keep my nails short because I have young children or plan vacations around school holidays or save for college tuition. What I can’t do anymore, I don’t care to… traveling with a backpack, eating dinner at 11:00, wearing a mini anything or worrying about leering men in hard hats.  If we don’t know who half the people on the Grammys are, or if we never eat another salami sandwich, so be it. The trade off — finally giving ourselves the time to understand what we’ve spent our lives learning — is well worth it. The opportunity has finally arrived for those of us who devoted decades to pleasing our parents, followed by decades of pleasing our children, to finally pleasing ourselves.

Of course I acknowledge the ickiness of the under arm thing and the chin thing and the memory thing and the wrinkle thing… but if you refuse to buy into the hype about the “ravages” of time, they’re manageable. I still feel much closer to my prime than over the hill. If I’m more tired now, it’s because I’m working harder than ever, not because I have less energy. I see my abilities becoming more concentrated, not fading. As we spend our days on more level ground than negotiating the jagged peaks and valleys of earlier years, we can become ourselves more clearly.

It’s not our imagination that we are “younger” than our mothers were at the same age. Faith Popcorn calls it down aging. John Gagnon, one of the authors of Sex in America, calls it youth creep. If you don’t believe it, compare any child over 18 to how you were at the same age. Then look at the other end of the spectrum. Sixty-five is now the beginning of the second half of life. We’re old for so many years  that we’ve had to come up with a new category, the old old, to differentiate the problems of those whose age is closer to 100 than someone brand new to social security. If you asked Goldilocks what you are if you’re not too young and not too old, you can guess what she’d say.

Right now is the best time in history to approach this landmark. Glasses are so in, people who don’t need them are wearing them. There are dozens of half century old beautiful women still fit enough to pose for their own calendar.  More books on menopause have been published than a person can read. And that incredible invention, the laser, is now able to do a myriad of cosmetic surgical procedures without pain or a hospital stay.

In the last few years I’ve overcome the worst case of computer phobia on the planet, accepted the challenge of co-writing a book in a genre that was completely foreign to me, lost 25 pounds and took up spinning (the bike not the wheel). I love going to the movies on Sunday afternoons and driving around in the first car I picked out all by myself (red, of course).  My relationships with my daughters have never been closer, my marriage has never been more gratifying, and my friendships have never been more fulfilling.

As I settle into this next stage of life, I’m aware that less than 100 years ago, only half of American women who reached age 20 lived to see 65. Poor things. They never even got the chance to have a colonoscopy.