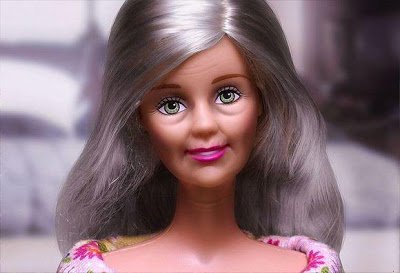 Time For A Boomer Barbie! What Would She Look Like? 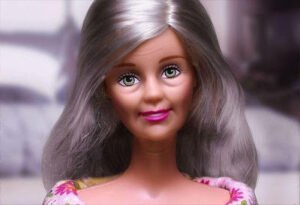 Barbie is on the cover of Time! The big news is that Mattell is bringing out a batch of brand new Barbies with different (and more realistic) body types. In addition to the original, Barbie can now be curvy, tall or petite, with a range of different skin tones and hair colors.

Barbie has been updated and modernized countless times since she first came on the scene in 1959.  (Although her shoes still fall off and the dog still chews them up.) But there’s one thing about Barbie that never changes. Her age! Little girls, who, like me, played with Barbie back in the 1960s have grown and matured, and yet our favorite doll hasn’t aged a day.

Now that it’s time for us to play Barbie with our grandkids, can I ask for one more new Barbie?  A Barbie who, like us, HAS grown up? Instead of playing make-believe with a fresh-faced know-nothing, why not introduce our kids to a Barbie who reflects both our lives and their future?

What better way to signal to your granddaughter that there’s more to life than what outfit she’s got on? And that while teen dating is fun, so is being a mature woman with a rich, full life?

Boomer Barbie would be shorter and plumper than original Barbie, and would come with at least one ailment (bad knees, a bad back, cataracts, etc.)   to kvetch about with the other Boomer Barbies. (The deluxe model has genuine hot flashes!) And all of them would talk, saying things like  “Where did I put my glasses?” “I’d love a cup of green tea.”  “Is it hot in here?”  And “When you have your health, you have everything!”

This new line of AARP-aged Barbies could include:

Now that the kids are grown, Silver Fox Barbie and Slightly Balding Ken  can re-focus on each other. Includes a Dream House with a paid-off mortgage, fat 401(k)s,  a Viagra prescription and matching Medicare cards.

After Barbie catches Ken and Midge making whoopee in the Dream house, help her kick him to the curb and jump back into the dating pool. Assist Barbie in crafting her Match.com profile, then dress her in tiny Eileen Fisher outfits and sent her out on exciting dates!

She may be in her 50s, but she loves those younger dudes. (For her date,  just borrow Ken from your regular Barbie. She won’t mind — he’ll come back to her a much better lover.)

Out and Proud Barbie

Help Barbie and Midge shoot their “It Gets Better Project” video! Includes a rainbow flag, a marriage album, matching white Tuxes and a Provincetown time-share with a signed Alison Bechdel original in the foyer.

And my favorite? Grandma Barbie.

Grandma Barbie reads books, sings songs, plays pretend, makes cool snacks and gives great hugs. If you’re lucky enough to be her granddaughter, you know there’s nobody Grandma Barbie loves more than you. And shouldn’t a cool grandma who loves you to bits be just as much fun for a little girl to play with as a vapid teenager who gets dressed up and goes out on dates?

And you can be sure that Grandma Barbie’s stylish yet sensible shoes will never ever fall off and get chewed up by the dog.

(Roz Warren is the author of OUR BODIES, OUR SHELVES: A COLLECTION OF LIBRARY HUMOR. http://ow.ly/LpFgE.)

Time For A Boomer Barbie! What Would She Look Like? was last modified: February 8th, 2016 by Roz Warren