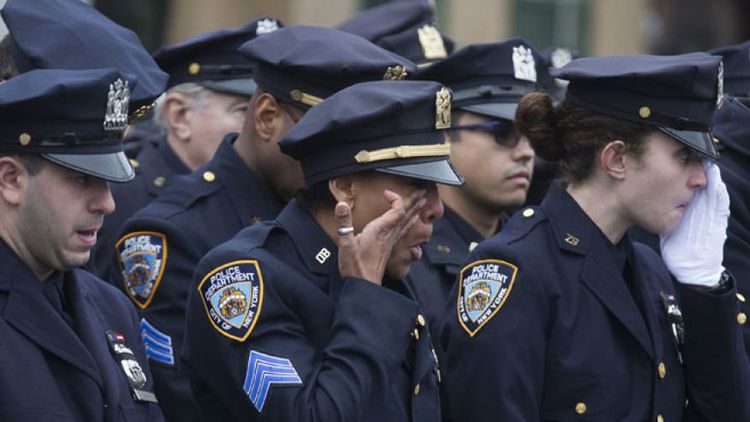 Thoughts On Being A White Woman At A Police Rally

My husband has been confrontational with policemen. Once when a belligerent cop stopped him, my husband asked him if he’d had nails for breakfast. That didn’t go well. He was young then, but still, he was handcuffed and taken to the nearest precinct.

When I see flashing lights through my rearview mirror, I panic. My heart beats faster and I feel scared. I know I’ve done nothing wrong, all my documentation is in order, but nonetheless, I feel frightened. Most often, the cop car passes, in pursuit of someone else.

I am not flippant about law enforcement encounters. I don’t like getting into trouble and I fear police authority. I recognize their power.

When, in the past, a policeman has approached my car window, I remain calm, respectful and cooperative.

I’ve never cried but my sister-in-law has, and she got a warning instead of a speeding ticket.

Below is a quote from the New York Times article, A Driver Fatally Shot By Police Had a Trail of Minor Traffic Stops.

“In his first six years as a driver, Mr. Castile received nearly two dozen tickets, mostly for driving without insurance or with a suspended license.”

Is this racial profiling or a hunch?

To say police were harassing him is questionable because when you break a law, which he did on a number of occasions, you get in trouble.

Complaining about having a consequence for wrongful behavior is like the student who doesn’t do his homework, shows up late for class, bullies the other kids and wonders why his teacher is picking on him.

I’m in no way suggesting that any of Mr. Castile’s misdemeanors deserve his murder. There are hateful white policemen in the world and they need to be weeded out.

And if Black Lives Matter supporters believed that white policemen guilty of wrongdoing would be treated as any criminal, and jailed just as any murderer, they might not feel as though they needed to take matters into their own hands.

The killing of police officers protecting Black Lives Matter protesters is unacceptable, sad and most unfortunate.

Last week, I attended a night event that was jam-packed. Trying to avoid the crowd, I parked in my mother-in-law’s driveway nearby. I didn’t realize I’d have to trespass on her neighbor’s property in order to get to the event but when I realized it, I kept on.

I was uncomfortable but I didn’t stop.

As I crossed the lawn at midnight, I wondered what would happen if the people who lived in the house looked outside and saw me in their backyard.

Like I said, I get a jolt of fear every time a policemen is near but deep down I know that if there was an encounter, with the homeowners or the police, I could safely talk myself out of it.

The situation would be totally different if I was male or (in that white neighborhood) black.

At that moment, that night, I felt privileged.

Even though I don’t carry a gun or drugs, would never be aggressive with a police officer and don’t have a record, I know because I’m female and white— I get away with murder.

Thoughts On Being A White Woman At A Police Rally was last modified: July 24th, 2016 by Corie Adjmi