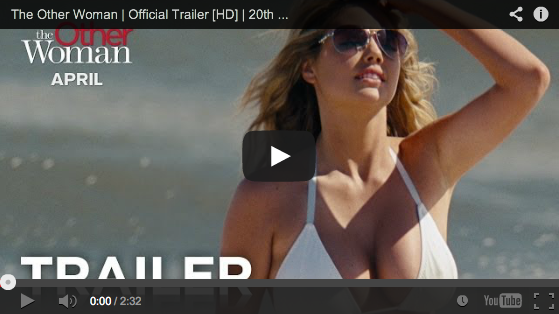 This Week’s BA50 Movie Review: The Other Woman

There are certain films whose time has passed and THE OTHER WOMAN is one of those. The cultural clock has been ticking and material like this has expired. Or so I thought. Apparently the “throwbacks” among us who think such films are in any way clever, funny, or entertaining– still exist. The film is a crude jumble of idiotic storytelling, clumsy direction, awkward slapstick– and is emphatically insulting to women. It was also written by a WOMAN: Melissa K. Stack– first-time major film screenwriter.

THE OTHER WOMAN tells the tale of three women betrayed by the same man. Carly (Cameron Diaz) is dating Mark (GAME OF THRONES’ Nikolaj Coster-Waldau) whom she discovers is married to Kate (Leslie Mann). The ladies soon find that their man has also taken up with Amber (Kate Upton SPORTS ILLUSTRATED swimsuit cover girl). Onscreen, the three women plot revenge; offscreen, they ought to have their prefrontal cortexes and their careers checked.

Within the first 45 minutes we are treated to an inane and disgusting monologue about an exploding head by the ultra-ditsy wife Kate whom we first meet on a toilet relieving herself. The bathroom locale sets the tone, pace, and level of insight here. Eventually we will see Kate vomiting into her purse, and splayed out in various public places- taxis, office buildings, usually drunk, or out of control, wherever her unkempt impulses have left her stranded. Other film highlights include Kate’s massive dog pooping in the middle of Carly’s pristine NYC apartment. The dog seems to have no purpose in the film except to defecate on command or later, to smack Carly in the face with his testicles. I felt for the dog.

Cameron Diaz is often positioned upended, rump to camera, or legs in the air, when she’s not cavorting through her office (she’s a high-flying attorney) in spike heels and skin-tight pencil skirts. Singer Nicki Minaj– in her big screen “non-acting” debut is a joke as Carly’s cartoon-like secretary in outfits so tight they look like tattoos. In one staggeringly regressive moment she puckers up her glossy lips and declares in close up:  “pretty girls don’t really have to work.”

There’s much drunken bonding between Kate and Carly around grooming and being “buffed and ready” for a man: shaved, scrubbed, and deodorized.  When Amber enters the picture, camera laser-focused on her bikinied boobs bobbing down the beach, Kate and Carly chase her and tussle on the ground in a bid for sexual supremacy; eventually we’re expected to cheer on the threesome’s ability to rise above their natural jealousies as women in order to gang up on a man. Part of their ingenious plot involves spiking Mark’s drink so as to trigger a “fecal incident”– complete with sound effects– in the middle of a swanky restaurant.

Apparently these women have no lives, because they can immediately drop everything– including Mark who walks out of one scene never to return–and suddenly have a cute sleepover, so they can cook up a revenge scenario that has them careening from the Connecticut suburbs, to Manhattan and the Bahamas. None of these characters, male or female, are developed as believable human beings with real lives. As they exist here, we can only laugh at them or hate them. Another case in point: Don Johnson who is stiff and creepy as Carly’s dad and is thrown into the mix, it seems, only to prey on women 50 years his junior.

This Week’s BA50 Movie Review: The Other Woman was last modified: April 28th, 2014 by Joyce Kulhawik