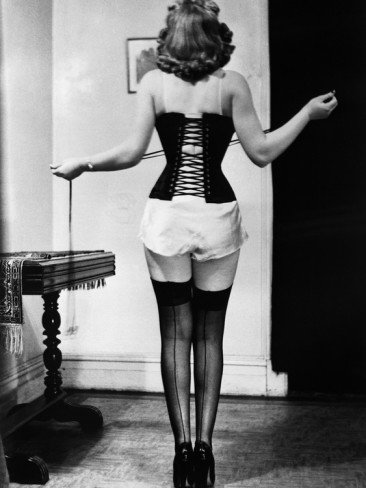 Suffering in My Spanx

The Academy Awards are just around the corner, and for many, it’s just another excuse to parade down the Red Carpet in unbelievably beautiful (and expensive) skin-tight dresses. Ever wonder how celebrities look so tiny and impossibly perfect under all those shimmering sequins? Here’s a hint: Many Hollywood starlets report wearing not one, but TWO pairs of Spanx under their gowns. So we can assume a no-liquid diet for 24 hours before the ceremony…because peeing is NOT an option!

As I was deciding what to wear one morning, searching for exactly the right undergarment for my chosen outfit, it occurred to me that men have it easy. At whatever age they answer the cosmic Boxers vs. Briefs debate, they’re good to go, like, forever. WE are faced with a vast sea of daily options, from the ubiquitous thong (stupidest fashion design, EVER. If you’re thin, under 22, and have never given birth, you might pull this one off. For the rest of us, it’s an all-day wedgie and looks like dental floss wrapped around the bottom of a Weeble), the French-cut brief (okay, if you don’t mind panty lines rippling diagonally across your backside like a geographical fault line), the full brief (the most flattering under your clothes, but in the laundry pile,  they look like Grandma Bertha’s undies. I fold my own) or finally, Spanx. In a dizzying variety of lengths and mission statements, these puppies can stuff your body into an otherwise out-of-the-question ensemble like nobody’s business. They take some time to master, but once you’re in, you’ll be strutting that 35th high school reunion dress like you OWN it.

As with all great ideas, however, Spanx are not without their design flaws. For Spanx to work, they need to be tight. The whole point is that they make you look firmer and smaller than you really are. If you can slip them on like drugstore control-top pantyhose, they can’t do their job. Having said that, there is, for unfathomable reasons, NO PEE SNAP. Seriously?? HEY, SPANX PEOPLE! In the ENTIRE design process, not one of you obviously-male-and-will-never-have-to-wear-one genuises thought, “Gee, given the basic concept here (shoehorning X size body into Y size dress), we might have a logistics problem if she EVER HAS TO PEE. Maybe we should put in a snap??” But, alas, not to be. My advice? Pee before you get dressed, and go easy on the liquids for the rest of the day.

I was getting dressed, mentally noting (well, crap) that as the “bloom of youth” is wearing off and body parts are no longer where God originally put them, my undergarments have become less frivolous and more functional. Less about “Hey, sailor” lace and more about lifting, stuffing, and otherwise coaxing recalcitrant areas into clothes I used to wear with ease. Finally selecting the most suitable Spanx style, I spent the next several minutes wriggling, cramming, and yanking it into place, until, exhausted, sweaty, and triumphant, I was IN.

As I was standing in the bathroom in my full-coverage, get-those-suckers-UP-THERE bra with thigh-length, waist-to-hips, bounce-a-quarter-off-your-backside Spanx model #327, Kenny walked in (Oh. Dear. God.) He promptly burst into unrestrained laughter, choking out, “What the HELL are you WEARING, woman?!?” Mortified, I punted and assumed a sultry expression, “Keep laughing, fella. You know you want me.” “That may be true,” he chortled, “but how would I GET to you??”

Sigh… Getting old is not for the faint of heart.

Suffering in My Spanx was last modified: February 18th, 2013 by Vikki Claflin