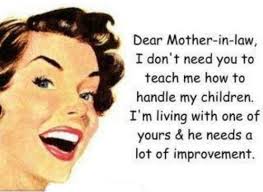 Although in many parts of the world marriage is now based on common interests and personal preference, remnants of the past live on in today’s humor.  Jokes portray the ambivalence between the generations.

Mothers in-law are portrayed as meddlesome:

“Two men were in a pub.  One says to his mate, “My mother-in law is an angel.”  His friend replies, “You’re lucky.  Mine is still alive.”

Fathers-in-law are depicted as ridiculously bereft at losing their daughters:

“Question: Why would you rather deal with a vicious dog than your father -in-law?

Mothers and daughters- in-law have little love between them:

“When I die, I want to be buried next to the Krispy Kreme.  At least my daughter-in-law will visit me there.”

Sons-in-law are shown as inadequate but lovable oafs:

“A golfer hits a ball and it misses the green by inches.  His partner says, ‘That’s called a son-in-law shot.  It is not what you expected, but you will take it.’”

Some jokes hint that one’s feelings about their in-laws are a matter of perspective:

Jokes from the perspective of adult children show their ambivalence:

Question: What is the definition of mixed feelings?

Answer: When your Maserati goes over a cliff with your mother-in-law in it.

These jokes live on because they encapsulate grains of truth.

This piece is an excerpt from Ruth Nemzoff’s book, Don’t Roll Your Eyes: Making In-laws Into Family.