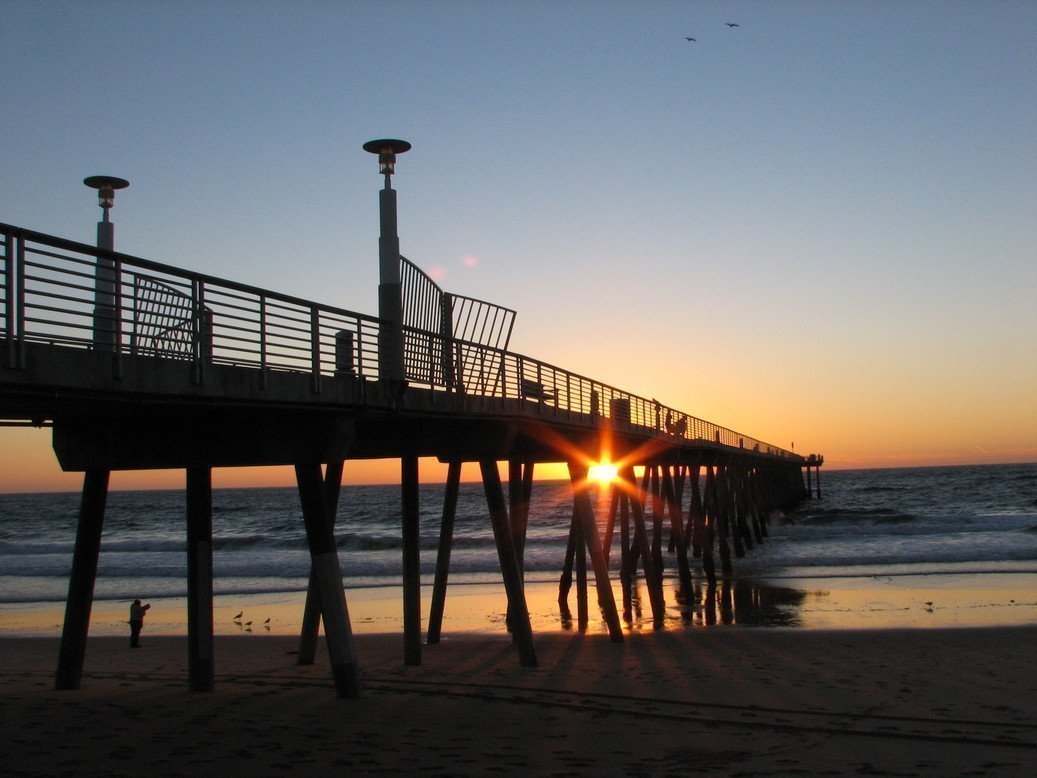 From my car, I’ve seen blue herons in Ballona Creek, distant glimmers of canals in Venice, and trails winding up through the Santa Monica Mountains. But I’m always too busy, too on-my-way-to-somewhere-else to stop and take a look.

It’s not that I don’t like to walk. I once walked 34 miles over five days to Milford Sound on the South Island of New Zealand, with only a daypack on my back. At night, I stayed in well-appointed huts. Locals made me nice meals and gave me wine; there were real bathrooms and comfy beds.

Recently, on one of those busy days, it occurred to me: I could do that same thing right out my back door here in Hermosa Beach—just head down to the beach, turn right, and travel up the coast, by foot.

I decided to do it. I asked an old pal, Louisa, if she wanted to come along. “As long as there are no sleeping bags involved, I’m in,” she said.

We set a date for early December, and I began to plan our route. About eight books and many websites later, I came up with a 38-mile route that would take us four days.We’d start on the beach path in Hermosa Beach, then move through the Ballona Wetlands in Playa del Rey. We’d continue around the canals and up Abbot Kinney Boulevard in Venice, through Santa Monica and Pacific Palisades, along the Temescal Ridge trail to Topanga Canyon, then back down to the Getty Villa near Malibu Beach, where we could catch a bus back to the South Bay. Each night,we’d stay in nice hotels and indulge in great meals.We’d carry only what we absolutely needed, in daypacks on our backs.

From the deck at the Beach House Hotel in Hermosa Beach, Louisa and I watched volleyball players practicing in the sun; the waves rolled in lazily behind them, and people strolled by on the Strand.

“See that?” I asked, pointing north to the roads spilling down from Topanga to Malibu. Louisa pulled out her binoculars. “That’s where we’ll be on Monday.”

“Oh, jeez,” she said, and sat down, perhaps to marshal her strength.

But she didn’t sit for long. After a quick breakfast, we strapped on our daypacks and headed out to the Strand. The 22-mile paved path at the edge of the sand runs from Torrance to Santa Monica and is a favorite of bicyclists, rollerbladers, joggers, and walkers.We saw our share of them, though the beach was mostly deserted, save for a handful of surfers near the Manhattan Beach Pier.

The beautiful scenery here doesn’t require a lot of concentration—you can take in the sun-dappled ocean and the envy-inspiring beachfront homes and have a conversation at the same time—and soon, we realized that we’d walked and talked the length of Manhattan Beach and El Segundo.We stopped in Playa del Rey, where we rewarded ourselves with pasta for lunch at Cantalini’s Salerno Beach Restaurant, a local institution.

“Amazing how easy it is to feel good about yourself with just a walk up the shore,” I said to Louisa, who agreed wholeheartedly.

After lunch, we headed out to the Ballona Wetlands, where I finally spent some quality time with those blue herons, as well as great egrets and some of the 200-plus other species now thriving in the marsh and wetlands. By sunset,we were heading for Marina del Rey along the Ballona Creek channel. The scenery was changing dramatically; before,we’d walked alongside swathes of sand or wetlands populated only by birds, and now we passed by men working on boats and stores lining little canals, reachable by arched wooden bridges. Then, suddenly, we were in a city—tall buildings, traffic, stoplights, and crosswalks.

We reached the Marina del Rey Marriott at 6:05 P.M. After a short rest,we headed down to Glow Lounge, the hotel’s courtyard dining spot. It was breezy and starry—in other words, pretty perfect.

We fortified ourselves with tomato dill soup, ahi tuna salad, and some dessert (which we justified by reminding ourselves we’d just burned about 1,250 calories), then we stood up. Or, rather, we attempted to uncurl our suddenly very achy bodies.

“Didn’t that reservations woman say there was a hot tub?” Louisa asked. Soon, we were in our suits and slipping into the bubbling relief.

We rolled out of bed after sleeping in a bit, and I took a minute to stretch. I was pleasantly surprised at the energetic bounce I felt in my legs and feet. Louisa and I agreed the hot tub had been a brilliant move.

Today would be lazier.We had scheduled about nine hours to walk six-plus miles along the Venice Canals and Abbot Kinney Boulevard, en route to the north side of Santa Monica.

We saw plenty on our walk through the canals, including kayaks pulled up in front of yards, dogs blinking lazily up at us, and Japanese couples posing for photos on wooden bridges. In someone’s backyard, three people were wearing Viking helmets and long braids.

We stopped at a “pop-up” store (a temporary structure that’s only open a few days) on Abbot Kinney called HintMint that sold “fashionable mints, in tins considered works of art.”

“I’m Sue Chiang,” said the woman behind the register. “What’s with the packs?”

“We’re walking from Hermosa to Malibu, going through Topanga,” I said.

“How cool! Not all in one day!” she replied.

“But probably sleeping on higher-thread-count sheets,” I said.

“It does give you an appreciation of small things,” Louisa said, as we crossed the street. Like sitting down, which we did for lunch at Hal’s Bar and Grill.

Later, as we meandered into Santa Monica’s Third Street Promenade, I marveled to Louisa how we’d encountered only good things: helpful people, great conversations, delight when people heard what we were doing. There was a real sense of goodwill everywhere we went, even at this outdoor shopping mall, where people were smiling at each other and laughing.

We didn’t hang around, though, seeing as we’d planned to have dinner at the legendary Chez Jay. (Confession: We took a cab to get there.) Mike Anderson is the owner of the former Rat Pack favorite, set improbably among big fancy hotels on Ocean Avenue in Santa Monica.

“There are a thousand stories here,” Mike told us. “And they’re all true. Alan Shepard used to hang out here. All the ‘Right Stuff’ astronauts did.”

Shepard, the first American in space, was asked on one occasion if he’d take a Chez Jay peanut to the moon. So, said Mike, he did, and he brought it back, where it was ensconced in a special case at Jay’s.

Actor Lee Marvin also used to hang out at Jay’s, and one day someone took the peanut out and said, “Lee, look at this peanut that Alan Shepard brought up to the moon and back.” At which point, Mike said, “Marvin popped the peanut in his mouth. And swallowed.”

We couldn’t linger at the Embassy Hotel Apartments, where we’d spent the night, even though we wanted to spend more time in the roomy, sunny suite.We had a 12-mile trek in front of us, a good portion of that uphill on dirt trails. And the sun would set at 4:44 P.M.

So we hit the road with coffee and scones in hand and walked a few miles to Sunset Boulevard via Chatauqua Boulevard, during which we passed a quintet from the Palisades Charter High School marching band playing in a little park.We loaded up on supplies at a local farmers market: dried pineapple, nuts, Greek food, pita chips, and water.Then we started the uphill portion of our hike.

“That must be the top up there,” I said naively after what seemed like a heroic climb. (I’d repeat this several times before we hit any kind of sustained plateau.)

Our backpacks prompted questions from other walkers and runners. In response to one, as we picnicked overlooking the Santa Monica Bay,we pointed to the South Bay and said, “That’s where we walked from.”

“You guys are awesome,”we heard back.Which we agreed we don’t hear often enough in daily life.

With 44 minutes till sundown, we still had almost three miles to go, and a storm was rolling in. Finally,we saw lights through trees; a dog barked.We aimed a headlamp at a car behind a house. On its bumper: a sticker for Topanga Canyon Inn, our destination.

I dialed inn-owner Warren Roché’s number on my cell phone. It turned out we’d stumbled onto Warren’s home, and the inn was still a half-mile away. He offered to drive us down, and we gratefully accepted.

We mentioned we’d suited up with ponchos for our walk to the Getty Villa the next day. “I just assumed I’d drive you,” Warren said. Louisa and I traded glances. “It will be dangerous in the rain,” he said.

We had wanted to be able to say that we walked all the way from Hermosa to Topanga to Malibu, that we’d done what we’d set out to do. But wasn’t the idea to be able to be flexible while traveling and take things as they come? Wouldn’t it still be pretty swell to say we’d walked 33 miles over three days? And gotten a lift on the fourth?

After a splendid fireside meal at Froggy’s Topanga Fish Market, to which we happily took Warren’s offer of a ride, we went to sleep. At some point in the wee hours, we were awakened by the sound of rain.We smiled at each other and went back to sleep.

We woke to the drumming of rain on the roof. Instead of gobbling down breakfast and charging into the rain, we lingered over French toast, sausage, and fruit that Warren and Elena (a painter whose work adorns the house) made for us.We listened to Warren’s stories of playing trumpet and conducting for Connie Stevens and Earth,Wind & Fire.

Warren drove us to the Getty Villa, where we admired the views at sea level and poked around the gift shop. In a book called How to Be an Explorer of the World, I read: “At any given moment, no matter where you are, there are hundreds of things around you that are interesting and worth documenting.”

And this, from T.S. Eliot’s The Four Quartets: “We shall not cease from exploration/And the end of all our exploring/Will be to arrive where we started/And know the place for the first time.”

The day at an end, we walked to a bus stop on Pacific Coast Highway and waited in the rain for the bus to take us home.

Months later, Louisa and I are still talking about this trip. “It’s the only trip I’ve made,” Louisa told me, “where I find myself still thinking about it on a daily basis.”

Our adventure had been a confluence of all the best travel elements: luxury and simplicity, action and relaxation, planned activities and time for wandering. Not only did we feel refreshed and renewed during the trip and for days after, but every time I thought about it or told people about it, I felt a jolt of energy and satisfaction.

More than anything, as the book at the Getty said, the trip helped us remember that at any given moment, there are so many things that are interesting and worth documenting.  Walking, it turns out, is the perfect pace at which to see these things.

We can’t wait to do it again.

This article was originally printed in Westways in May 2010. Reprinted here with the permission of the author.