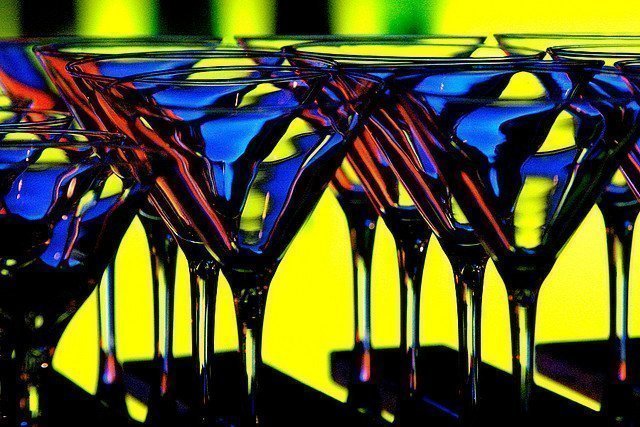 The Mother of All Cocktails 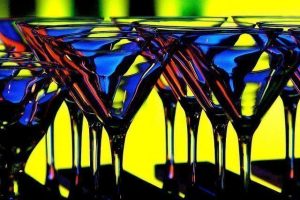 Last night it was rainy, dark, and windy…the perfect time to get out of my wet clothes and into a dry martini, as Robert Benchley classically observed. Since I was in my mid-twenties, after spending the teething phase of my drinking life dabbling in frozen margaritas, strawberry daiquiris, and fuzzy navels, my libation of choice has been the gin martini…very dry, very cold, with olives. Up or on the rocks, I confess does not matter to me.

The martini is at once stand-offish and seductive. Nothing to my mind better signifies grown-up cool than the iconic stemmed glass, with its crystal-clear liquid and single maiden olive pierced by a well-honed pick. No other beverage beguiles you into gazing across the table as you sip, head cast down as if you were reading the juniper berries, half-lidded eyes turned up, at your drinking partner. Faster than sound across water, a message sent martini-mail reaches its mark before you set down the cocktail glass.

For a good many of the years I’ve been sipping, the gin martini was considered a fusty relic of a bygone time, especially by my generation. First the Chablis and chardonnay crowds spurned it; then the single-malt snobs ignored it, and of course the red-wine health nuts regarded it with morally superior contempt. But then it got discovered by hip twenty- and thirty-something’s. Maybe Mad Men revived it. Maybe the Absolut (vile stuff) marketing campaign had something to do with it. I don’t know, and I don’t care.

What I do care about though is that all of a sudden my elegant, high-toned, high-test cocktail starting arriving in birdbath-sized glasses. I suppose to justify the $15-plus price tags the bars began charging, but, really, who needs a six-ounce martini? It won’t stay cold, unless you chug it. It won’t retain that slam, bang, tang that made Sinatra and others believers. No, what it will do is get your 50+-year metabolism drunk… fast. Which isn’t the point. A martini should insinuate itself into your faculties…loosening your judgment and your standards maybe just a little, putting you at the brink of misbehavior but letting you stay in charge. One more thing:  A “very dry martini” is not code for “skip the vermouth.” That drop or two (at most) is essential to the chemistry of the elixir. Without it, you’ve got a drink but you don’t have a martini. Downing a big gulp of gin is not part of martini culture.

And while I’m on the subject, neither is calling any vile concoction you care to dream up a “martini” just because you have poured the stuff into a defenseless cocktail glass. My idea of being outré with a martini is substituting a pickled onion for the olive, and I have the decency and sufficient respect for the mother of all cocktails to call this drink what it is: A Gibson. But instead we find chocolate martinis. Sour apple martinis. Mango martinis. There’s even some ghastly creation called the “breakfast martini” that requires the addition of orange marmalade. If I want breakfast, I’ll have Cheerios; if I want a martini, I’ll wait till 5 p.m. and then have gin and a whisper of vermouth…hold the fruit, all of it.

And then there are the gin snobs. Oh, for the days when Beefeater reigned supreme. Now in addition to the tasty but potent Tanqueray, there’s Tanqueray Ten (premium priced, of course, but not discernibly different from the regular) and Tanqueray Rangpur, flavored with exotic limes (and quite serviceable in a Gimlet, but that’s it), Bombay Sapphire (a higher proof and price) competes with its poor sister in the green bottle, and the liquor shelves are choked with all manner of small-batch, premium-priced infusions, each competing for the discerning drinker’s palate. Don’t get me started on the bubble-gum and whipped-cream flavored vodkas.  Give me plain old Gordon’s any day. Just try ordering Gordon’s in a swanky bar or restaurant and watch the smirks and assurances that “we don’t serve that” begin. Truth is, I used to be a Tanqueray girl, but as I got older I found I didn’t need the extra proof, so clean, crisp Gordon’s does me just fine.

All of this is my longwinded way of saying I can hardly wait for the martini craze to end and for things to get back to normal…me and the ghosts of Nick, Nora, and Mame bellied up to the bar, Dave McKenna at the piano.

The Mother of All Cocktails was last modified: May 5th, 2012 by Nancy Kelly