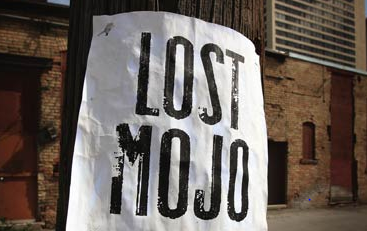 Male Confessions On Dating: My Mojo

Since I date with the intention of falling in love and being half of a meaningful relationship, I should be thrilled when a woman I’m interested in likes me, right? Actually, this is the difficult part for me, and perhaps for other midlife men. This is when I consider whether or not to follow my heart. But getting into a relationship is a leap of faith, and I’m in it to win it, and follow my heart.

The sexual aspect of dating comes next, and that’s about Mojo, libido. Mojo is critical in order to be sexual, but after divorce, mine went into hibernation. For the first time in memory, I experienced a physical disconnect. I spent some sleepless nights pondering my lost Mojo, wondering if it would ever be found again.

I had several coffee dates, and a few second and third dates. My Mojo never stirred. For a while I feared this condition might be permanent. Then I began dating a woman I liked on several levels, and it woke up with reassuring vigor.

Not surprisingly, it was about more than physical attraction. I felt my libido awaken when she shared how she was feeling about me as a man, on an emotional level. When she articulated her feelings, my heart swelled, and my body followed. I felt whole again.

So why would any rational man look this gift horse in the mouth? I don’t want to be sexual just to satisfy my physical needs any more. There has to be an emotional component now, and a compelling one at that. Rocket rides feel great shooting up into the sky, but nightmarish falling back to earth. It takes too long to heal the wounds of yet another failed relationship, so to behave in a manner my experience has proven will fail, is emotional suicide.

My Mojo’s awake, my body is functioning normally, and my sexual urges are becoming harder to restrain. Why restraint? I’ve made a promise to myself to change my behavior at the beginning of a relationship.

Instead of following my old path, becoming sexual as soon as it was mutually agreeable, I want to know a woman well enough to feel there’s genuine relationship potential. I don’t want to screw up any more with women, no pun intended, and jumping into a sexual relationship before there’s some semblance of an emotional one, just doesn’t make sense now.

I want to feel lust, but I also want to feel love, or at least something approaching love. I want to feel we’ve started down a path toward something meaningful. While I hope this doesn’t sound too 1950s, midlife has taught me some valuable lessons, and not ignoring my feelings is one of them. Repeating failed behavior, hoping it will eventually work, is the classic definition of insanity, and I’ve gone off the deep end enough to recognize insanity.

As a midlife guy, my brain has taken the lead as the primary sexual decision maker. It still requires some discipline, but since I’ve incorporated emotional honesty into my relationship paradigm, my Mojo is active, but under control. My heart and body are connected, and neither operates independent of the other. Wow, and it only took decades to achieve that coordination.

I’m not referring solely to my emotional honesty, but to a woman’s as well. Conversations have to evolve into the kind of emotional dialogue that makes relationships work. Problems arise. How they’re handled and resolved determine a successful or failed relationship. Avoiding talking about how we’re feeling is not part of an enlightened relationship plan. If we each hold up our ends of the emotional sharing stick, thorny issues don’t have to become the death knell of the relationship.

I don’t want to be flattered by a woman as much as I want to know her true feelings about me as the relationship unfolds. Hearing a woman share her feelings about me is what woke my Mojo up in the first place. I know there are still some men who reject the notion of emotional honesty with women, but it continues to prove its value to me. What I’ve gleaned is that absent sharing on an emotionally honest level, midlife Mojo alone can’t carry the day.

This seems a healthy midlife dating strategy because it reduces the pain associated with yet another failed relationship. To some, this may be obvious, but to others, like me, it wasn’t. I recognize that being a man isn’t an excuse to do every dysfunctional guy thing possible, and sex without any emotional connection is a guy thing I’m avoiding in midlife. Being in control of my Mojo feels empowering.