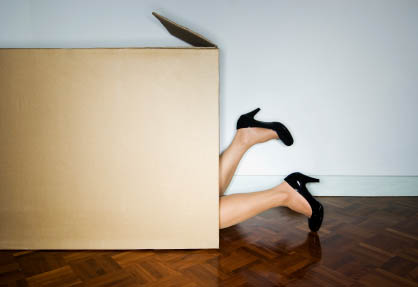 When asked what I planned to do in retirement I felt like a five-year old under interrogation. Saying I wanted to be an astronaut would have been met with greater approval than “I don’t know yet.” Apparently mature adults had the rest of their lives figured out before the retirement party.

I diagnosed my state of paralysis as owing to the condition of my tiny apartment. There were unpacked boxes dating from my move 20 years ago, no safe way to orienteer between kitchen and bedroom, and the worst insult of all—half my bed had been taken over by paperwork. Before wrapping my head around the future, I needed to reshape my environment.

Employing the five-year rule, I stuffed Lawn and Leaf bags full of clothes destined for Goodwill. In the kitchen, where wicker baskets occupied a high shelf, I found one devoted entirely to old T-shirts. Although stained or too small, they recalled good times I’d had at places I’d been. By cutting out the best designs and stitching them together in random shapes, I imagined a fabulous quilt emerging. Passed down through generations, the heirloom would tell my life story.

I was never more than a mediocre pianist and hardly played at all any more. Yet piano music overflowed from bench to book shelves to stacks on the floor. Etudes, Chopin waltzes and Beethoven sonatas; sheet music of jazz, folk, and hit parade; books of musicals from Berlin to Sondheim.

I would play through them one more time. Thanks to improved dexterity from extra Celebrex, the old scales and warm-ups would seem painless. Then, practice, practice, practice. Not to arrive at Carnegie Hall, but why couldn’t I at least record a CD? A Christmas gift for my daughters to hear again the music they grew up with.

Unlike piano music, files from my teaching career were of no use to me now. Salary schedules, administrative evaluations, lesson plans—what possessed me to bring this stuff home? But when I stumbled on an old journal along with two boxes of primary data, I knew there was a reason. Ten years earlier I had documented a year in the life of my classroom. In retirement I’d intended to write about that year.

With clutter banished and three projects neatly set aside, my living quarters took on a Feng Shui aura. Should anyone ask, my future would be occupied with quilting, going back to the piano, and writing a book.

Curious, I picked up the school journal—anchor to my forthcoming literary work. The hour it took to read felt as long as the year it covered. If it had been written in Latin it might have exuded more warmth. Taking aim at a wastebasket across the room, I jettisoned the lifeless body with shocking fury. “And you’re next,” I snarled at the two smug piles of raw material destined never to become more than they ever had been.