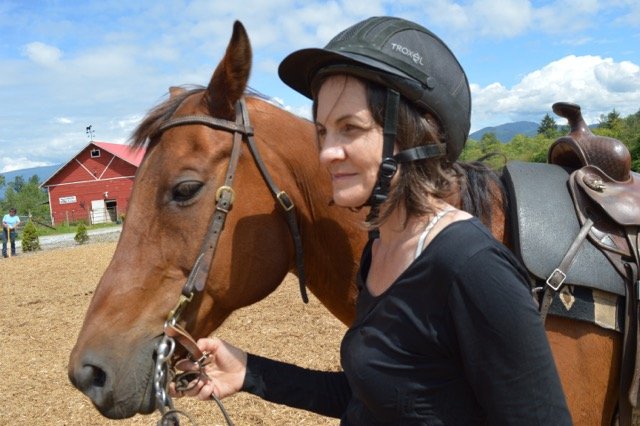 As a 12-year old I had the usual enthrall with horses typical of my peers.  My horse phase was short-lived however and soon the horse poster in my bedroom was replaced with a poster of ABBA.

It wasn’t until I had a daughter of my own that I thought of horses again. On Abigail’s 12th birthday I decided that she should learn to ride.

I called a horse farm offering western lessons about half an hour out of Vancouver. Grassroots Ranch in Maple Ridge is run by Deb Murray. At 62, with her tell-it-like-it-is, denim-wearing, boot-kicking, tough-talking manner Deb is the closest I’ve come to a flesh-and-blood cowboy this side of the Rocky Mountains.

Abigail it turned out was too dreamy to ride  and soon wanted to quit. I was disappointed and pushed her to keep at it. “Why don’t you, Mom”, she suggested with savvy pre-teen attitude.

At first the idea seemed ridiculous. After all I was turning 50 that year while all the other riders at the farm were within a year or two of 12. But the possibility grew on me and one day I mustered up my courage.

“Of course you can ride”, Deb responded matter-of-factly while picking muck out of an up-turned hoof. “Your core looks strong.”

On my first lesson I was introduced to Traveller.  “He’s an old lesson horse” said Deb with a fond pat on his neck.  By this she meant that he had grown smart to novice riders.

“You just have to stay on him. Remind him who pays the bills.”

The first time Traveller picked up to a trot I thought my ribcage would rattle apart. My bum was so bruised I couldn’t sit properly for days.

From the start Deb wanted me to learn to ride from my legs.  “All communication with your horse should come from your legs” she said.

Traveller seemed determined to ignore whatever it was my legs were trying to tell him. Whether I nudged with my heels or pressed with my calves he was defiant.

“You have to get after him, Tam. (Deb shortened everyone’s name. Three letters was your allotment.)  “Don’t be so accommodating.”

I bumped as hard as I could.

“Harder.” she shouted across the outdoor arena.

“He doesn’t even know you’re there”.

One day a heavy summer rain had us an indoor arena in town. Traveller was his obstinate self, slowing to a walk at the turns, refusing to lope from a trot.  Meanwhile a 12 year-old kept sailing by me, an effortless lope on a perfect horse.

A lump began to grow in my throat. At 50 I didn’t need an old horse making me feel lousy about myself. I brought Traveller to a stop and told Deb I was through with him, through with riding.

Deb had been leaning against the boards. She pushed herself up.

I fought back tears.

She reached a hand up onto my knee.

“What is it?” The compassion in her voice as wide as a prairie horizon.

“Nothing” I said, then started to sob. It all came out: the job I’m leaving after 20 years, the early-stage breast cancer, my struggling marriage.

Deb helped me dismount. We led Traveller out through the rain to the horse trailer.  As I untacked Traveller Deb told me stories of people whose lives were worse off than mine. Cowboy therapy, I figured.

The following Saturday out of routine I went back to the farm but didn’t ride. I asked for work and Deb  suggested I cut brambles along a fence line. I noticed Traveller grazing in the field nearby and wandered over.

“I owe you an apology, buddy.”

He surveyed me with his enormous black-brown eyes.

“All this time I thought it was you”, I said.

He swished his tail across his back then buried his nose in the grass between us.

The next week when I returned to the farm something had changed. I understood now what I had to do. I pulled myself up into the saddle. I bumped with my heels, squeezed with my calves and flicked with the end of my reigns. Traveller broke into a lope.

It’s hard to describe the feeling when you know that neither you nor your horse are holding anything back. It’s then that you understand your core strength. Then that you know everything will be okay.

The Big Life Lesson I Learned When I Started Riding Again At 50 was last modified: August 1st, 2016 by Tama Ward