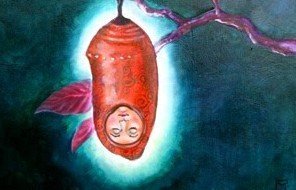 I am not a planner, but I do know that this was not the plan I would have made had I made a plan.  No, if I were a planner Jessie would still be George.  She would be a he, would have a short, appropriate haircut and be more interested in sports (or some other “male” hobby) than in sewing.  She would be jonesing for the newest Nikes and not the sale at Delia’s.   There would be no holes in her ears sporting shiny, dangling jewelry and I wouldn’t be forced to hunt in her room for my favorite brush.  Oh, if I had planned, things would be different.

It would be dishonest to say that the adventure Jessie has embarked on is an easy one.  Or even one that I fully understand.  I cannot claim to be totally comfortable with her choices of dress and hairstyling.  I am still, close to a year into it, sometimes caught off-guard by her decidedly female presentation.  I won’t tell you that it has been a joy to watch and that there are not times that I wish I had somehow “planned” better – for both Jessie’s path and my own comprehension of her needs.

Oh, if I had concocted a plan for her childhood, I can guarantee you it would not include a change of gender identity.   It would not have a line item for a name change.  And it would certainly not include finding myself writing a blog which is read by thousands of people, most of whom I do not know.

All that said, I am actually glad that I didn’t have a plan.  (I plan for nothing and live by my father’s credo that things have a way of working themselves out. I do not always execute the process with the aplomb that I would like, but I do let things happen organically…for better or worse.)   If I had indeed planned, I would be feeling like a failure (which I do not).  I would be ruing all the woulda, shoulda, couldas (which I do not).  And I would be doubting my parenting (which I do not).

My lack of planning is not to be confused with a lack of expectations.  I certainly did not expect, even in the throes of the Barbie phase, that my little boy would become my daughter.  Nor did I expect to be not only living, but chronicling her transition.  When I fed a house full of people for my second child’s Bris and naming, I did not expect to be thinking about her Bat Mitzvah some day.  Likewise, I did not expect the outpouring of support from my friends, family and community when Jessie boldly made her announcement.  But sometimes reality exceeds expectations–and sometimes, not always, it is the surprises along the way that provide, in a backhanded sort of way, the joys of life…despite (or in spite of?) the bumps along the way.

When I look at Jessie I know that things are right for her.  For now.  I know that she is comfortable living her life as she has chosen.  For now.  And I know that she, like her mother, has not planned too far ahead.  She is taking this one day at a time and, in a sometimes Xanax necessitating way, I applaud her for her lack of planning.

Like
The Best Laid Plans was last modified: November 27th, 2012 by Julie Levinson