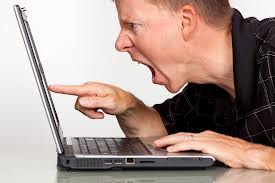 The Art Of Avoiding An Angry Email

This month marks the Jewish New Year. During the service to celebrate the holiday, my Rabbi delivered a compelling sermon on the perils of pressing the ‘send’ button in the heat of the moment.  She told the story of a man who was morally incensed by a YouTube video and fired off a damaging and misdirected letter to the editor of a large paper. We live in a virtual world, she explained to a room full of congregants, where no one bothers to gather data or backstory. The Internet is a place where people have the power to judge one another quickly and anonymously.

Less than 24 hours after she gave this moving speech, I received an inflammatory email. The irony? It was from someone who was listening to the very same sermon.

I am not a saint. I have sent a few choice emails in my day. Before technology grew (and so did my kids) I wasn’t as careful in writing. I cringe when I think about a particular email I sent to another mom from my kids’ school years ago. It was one of those days where nothing was going right. I left the office late, my kids were cranky and my duties for an evening school function were suddenly expanded. Later that night, this mom said something about my quick exit. In hindsight, it was just her attempt at humor. In my mood, however, it came across as an attack. I came home, sat at the computer and doused her with a gasoline-like email, before even kissing my children hello. I see her often. We have mutual friends. I can still catch a flicker of anger in her eyes. I try to bring levity to our curt greetings, knowing that it will always be a roadblock between us. My jumping of the gun was foolish and unnecessary. I will regret it always.

“Happy New Year,” was the subject line of the email I received last week. It had been almost a decade since I had contact of any nature with this person. Our families were friends when the kids were young but we parted ways due to different lifestyles, opposing values. I have lived a lifetime in those eight or so years. I have watched my children grow, lost family members, run six marathons, deepened my friendships, devoted myself to charitable causes and found a great sense of peace in my marriage. He knows nothing of my life, my struggles, my feelings or opinions. In turn, I don’t claim to understand what has happened in his family’s life.

His email asked if I really harbor so much hatred and resentment toward him and his family that I would turn my back on him. “Can you bury the proverbial hatchet?”  I was confused by the accusation. Had he said hello to me? Did he reach out his hand and I did not take it? I furrowed my brow and tried to remember how I could have affected him so negatively. My husband said that he was near us during a particular part of the service. This is the time that we all get up to stretch and chat, while music is playing. I used that time to hug my girlfriend who was seated two chairs away. Her daughter, her first, just left for college.

“It’s sad that you have such strong feelings 8 years after we parted,” the email continued. When the Rabbi spoke of the incendiary letter to the editor that rushed to judgment, she also explained the virtue and value behind forgiveness. We need time, she explained, to gather information and to collect our thoughts. This evocative email might not be about me at all. So much time and space has existed since we last spoke, it would be strange for him to reach out at all. Years ago, I pressed send too soon, under that stress and strains of life. Perhaps this person, who jumped to a conclusion, was having his own moment — a bad day, a hard week. So many times I want to know motives, understand why someone does something to hurt.  When there is no explanation, I try to find room these days for forgiveness. Compassion for others and an understanding that it isn’t always about me.

Now that I am older, I have ceased sending emails or responses so readily. I take my time, edit and wonder how my tone will sound to the person on the other end.  Most importantly, I want to model my behavior for my technologically dependent children. I want them to be thoughtful and kind in texts, and in all social media. Most of all, I want them to learn how to forgive, before they ever think of pressing send too soon.

The Art Of Avoiding An Angry Email was last modified: September 12th, 2013 by Mimi