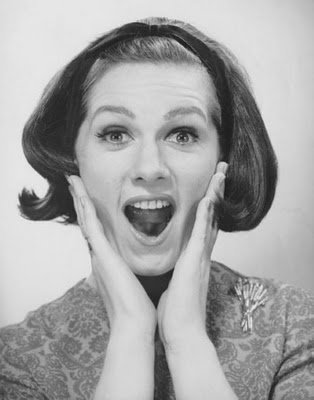 Last night we went to a surprise 50th birthday party. We brought a small gift along, even though the invitation specifically requested ‘no gifts’. Buying a gift for a 50 year old friend is not easy; especially when the people deciding on the gift item are of opposing genders.

Not to worry. I was in charge of buying the gift. I picked out something simple, and had it wrapped with lots of decoration to express happiness. I didn’t imagine the birthday girl was so happy about turning 50.

We arrived at the restaurant early as instructed and placed our gift on the gift table set up at the door. Then we sat down at a table with eight other strangers to await the big surprise. A waiter brought drinks with umbrellas sticking out, and we introduced ourselves around, connecting the dots between friends. Another round of drinks appeared, but no food followed. By the time an hour passed, I was hanging over the back of my chair, lips numb, vision blurred.

I whispered to my husband, “Please interrupt me if I’m talking like a fool.”

His head bumped mine. “Who are you?”

Finally, an announcement was made. The birthday girl was on the way. Someone told us to hush. We hushed.

She came in, looked around, and let out a little scream. Then she punched her husband on the arm. Hard.

She had thought they were dashing out to get a quick bite in a casual restaurant where you eat outside with newspapers on the tables. She had been cleaning out the basement. She was wearing shorts and a T shirt and rubber gardening clogs. No makeup. Laundry clips held back her hair. She looked 50!