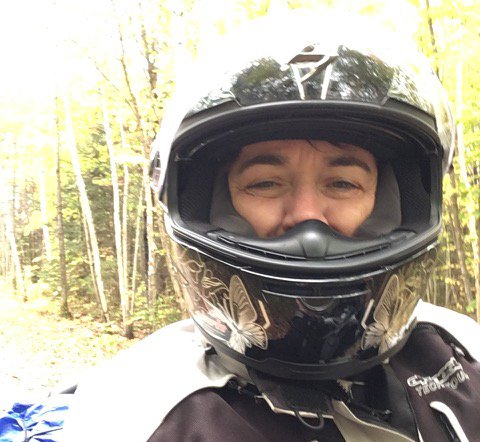 My 55th birthday gift to myself this year was to take the last step to radically change my life.

I started working as an IT Service Delivery Manager in April of 2018 taking on a challenging role that I really wanted. The following month, I separated from my husband and moved into an apartment. After reflecting over the year that followed, I realized that I was ready to change even more and announced that I would leave the job that I wanted so much just twelve months earlier. Despite an amazing team and great leadership I was not happy and could not seem to shake the feeling that I didn’t belong in that role although the team was pleased with my performance.

I decided to take the leap and am incredibly lucky as there was an early retirement package tied to my departure which gives me a little wiggle room.

On August 29th I worked my last official day of work, August 30th had me finish packing up my apartment and on August 31st I hit the road on my motorcycle (a 2015 Can Am Spyder ST). The goal was to ride coast to coast in Canada on a solo adventure. Part 1 (The Atlantic Leg) consisted of over 5000kms and was covered during a 16-day vacation in June and July. It was amazing. I had already ridden a good portion of that road last year but this year I covered New Brunswick, Prince Edward Island, Nova Scotia and Newfoundland. It was a great way to start the journey as I knew most of the roads quite well and had mapped out each day in advance down to the hotels, B&Bs and ferries.

Part 2 (Westward) was different though. I purposefully left without booking anything– just me, the motorcycle, camping equipment and a general idea that the return trip should take about 6 weeks (Montreal to Tofino, on the west coast of Vancouver Island, and then back).

The experience was, without doubt, the most incredible journey. During 11,578 kms, old habits that no longer serve me were obliterated, and I experienced a freedom unlike anything that I have ever felt before. I camped when I felt like it, found hotels when that felt right and did everything on my own schedule. I had random conversations with perfect strangers and kindred spirits that made the adventure complete. Most importantly, I knew in my bones that I was exactly where I was meant to be at every step. Living in the moment is an extraordinary gift and one that has eluded me for most of my life. The Spyder gives that to me.

And now, I’m ready to start over. I joke with my friends that I am jobless and homeless and while these things are technically true, there is no fear about the future. I am capable and will spend the next couple of months mapping out the next act as I figure out where I do belong. My new mantra can be summed up nicely as “Life is either a daring adventure or nothing at all.” (Helen Keller, The Open Door) We get one life to live and we owe it to ourselves to make the most of it.

Starting Over was last modified: October 22nd, 2019 by Wendy Mcgean