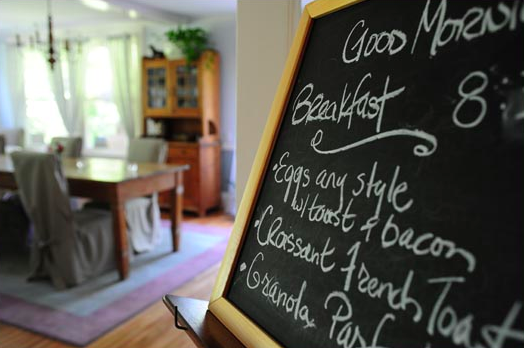 Starting a B&B When I Turned 50

Sometimes the craziest things happen when you’re spontaneous. After raising four kids and running a small catering business – all while being married to a busy doctor, playing team tennis and performing with a small aging dance troupe — it felt like things were winding down in my life. And I’m not the winding down type of woman.

The last two kids were still at home on Martha’s Vineyard, where we lived, and I was finding myself with time and dreams and time to dream. So, during a therapy session I mentioned that wouldn’t it be fun to run a B&B and not have to run all over town catering other people’s parties. My therapist told me that, in fact, there was a B&B for sale not far away. A half hour later I was there and 10 minutes later I was on the phone with my husband with the news that I wanted to buy a 6,000-foot- plus house and run a B&B. He is, by now, use to my “crazy ideas” so he said, “We’ll talk when I get home”……

Very long story short: We went ahead with the project (I can be persuasive), and nine years later I am still loving every minute of being a B&B proprietor. Granted, there were hurdles. Redecorating was the biggest challenge but a total labor of love. Being able to see what the place could look like with as little financial investment as possible was difficult as was owning commercial real estate — an adventure I’m still learning about (and definitely not my favorite part of the job description). The grounds are beautiful consisting of two prime acres in town that could be subdivided several times, giving us a financial cushion.

Bottom line (and lesson to other BA50’s): I was able to combine all my passions into a career…. cooking, entertaining, gardening and creating an atmosphere to nurture my guests. It never gets old because people, seasons, and staff are always evolving. I also love being an integral part of the community.

We are now grandparents times three, and having the B&B for our family to spend part of the summer is the icing on the cake. For me, the risk to open this B&B was the road well taken. I am honestly better after 50. I couldn’t have done it any sooner, and am so glad my fear of “winding down” instead helped me “wind up” to an exciting new chapter.

Starting a B&B When I Turned 50 was last modified: December 14th, 2011 by Jilana Abrams