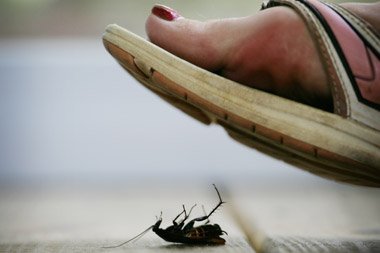 Squash What Bugs You On Friday, Mike and I had an early flight to Baltimore. I was planning to write, but the flight was particularly bumpy and I couldn’t concentrate. I decided to pick Mike’s brain about my topic of choice–pet peeves. “Besides really bumpy flights where you can’t get any work done, what kinds of things really bug you?” I asked, pretending that I didn’t already know that leaving the lights on, failing to run the disposal and leaving the toothpaste cap off the tube drove him nuts. Ever the diplomat, and not wanting to start the weekend off on the wrong foot, Mike suggested that we might encounter a thing or two that bugged us during our day of travel, and that we could make note of them along the way.

Within minutes, we started a list that grew steadily and consistently throughout the day. The flight was late, the baby in the seat directly in front of us wailed, people drove slowly in the passing lane of the highway, and wouldn’t budge. The GPS took us the long way around, through traffic, and directly ahead of us, a driver left his directional signal on. “This is just too easy,” I thought to myself as we encountered a close talker with bad breath.

And this was all before lunch. Mike and I gave each other a questioning look. Is life always this annoying? We were on a roll. The restaurant bathroom didn’t provide a hook for my purse, some jerk took up two parking spaces in the crowded parking lot, and the service was slow. I bit into a mealy peach, and later found my banana in my purse, brown and squished. We were put on hold for what felt like a full ten minutes, and a miscommunication had us waiting at a marine store for 45 minutes for absolutely no reason at all. We checked into a hotel with a weak internet connection, and I was not able to log on to check my email.

A few days earlier, I had informally surveyed a few friends and relatives about what bugged them. No one was at a loss for ideas: an unmade bed, hair in the shower drain, the toilet seat left up, a hairdresser that wouldn’t shut up, people who snapped their gum, ice cream with freezer burn, sitting through a power point presentation where the speaker simply read the screen shots out loud, clementines with seeds. We all seem to be bugged by plastic wrap that gets stuck on the roll, telemarketing calls, people who borrow stuff and don’t return it (even when we are one of those people), and double dippers. We get annoyed by the chronically late, but also by the neurotically early. There are web sites devoted to lists of pet peeves. Hundreds of little things bother us daily.

But at the end of that day of travel, as I got into bed in a cool, air-conditioned hotel room, I realized that despite a very long list of petty annoyances, we had not had a bad day after all. Actually, it had been quite an extraordinary day. Just before sundown, the sun broke through the clouds that had been threatening rain all day. The errands were complete, the travel over, and as the sun lowered, Mike and I sat harbor side, watching a brand new American flag wave off the stern of a not yet completed sailboat that was the culmination of months of planning and a lifelong dream. The sun felt warm, and the beer was cold. There was music playing downwind, and even the thumping of the rap (obviously from a motor boat, not a sailboat) didn’t bother us.

Mike and I sat on the deck and focused portside on two black Labs swimming off a nearby speedboat, and watched as the owners pulled the heavy dogs onto the boat and the dogs proceeded to make a huge mess as they shook off the excess water. Mike and I looked at each other and smiled, because we were both thinking the same thing: “That won’t be happening on this boat.” Often a moment can cancel a day of annoyances.

When we focus on the everyday annoyances, it makes us testy and impatient. When we are tired and hungry, it makes it worse. On the way home on Sunday, I decided to focus on all the little things that made my day better: the hot cup of coffee at breakfast, the new Star Trac elliptical machine at the hotel, the lack of traffic on a Sunday morning, the technology that allows airport parking to know exactly where you’ve parked your car and gives you a reminder of the location when you pay. We don’t often take notice of the things that make our lives easier, but they are silently there, providing a balance for all those little annoyances.

We all know not to sweat the small stuff, but maybe we need to go a little further. Maybe we need to focus on the every day stuff that cancels out the crap that bugs us, and try a little harder to tip the balance by savoring special moments. And for those days when those moments are scarce and not much seems to work right, well, I suppose that is why they made scotch.

Squash What Bugs You was last modified: September 11th, 2012 by Ronna Benjamin