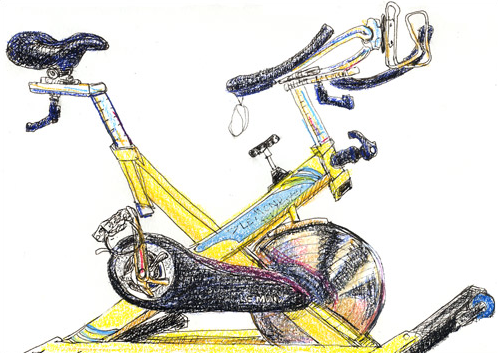 In a darkened sweatbox of a room, 25 men and women sit in a circle, each on a stationery bike. Perched on seats roughly the size of a slice of pie, they pedal as if pursued by the 2,400 calories of a celebratory dinner. They execute quick movements on and off the seat, sometimes standing up and riding out of the saddle. And I… an unathletic, non-competitive, uncoordinated grandma, am one of the best of them.

For years I belonged to gyms, taking aerobic classes and facing that dreadful unforgiving mirror. Painstakingly trying to learn those intricately choreographed arrangements (and always feeling a beat behind), I was jealous of the women who immediately picked up the routine that I was still struggling with after a month. Step classes were a little better… till my knees said no mas. I tried yoga but it didn’t burn enough calories. Next I experimented with boxing but found I didn’t possess either the skill or the endurance to feel successful. Till I found spinning.

I got the courage to try it after months of admiring the red-faced sweat-drenched participants, ranging in age from 17 to 75, walking out of the mysteriously dark spin room. Spinning is a cardiovascular cycling workout led by an instructor who chooses specific songs for sprints, climbs and jumps. Riders synchronize their pedaling to be in time with the rhythm of the music. The class is designed to push the heart rate to high levels by constantly varying speeds and positions on the bike. As long as there were no mirrors, and it was low impact, I figured all I had to lose was the promised 500 (!) calories by the time the class was over.

“Close your eyes, the instructor exhorted that first day. “Head down, elbows bent, knees in, feet flexed. Take that hill. Sprint to the top. Don’t give up on me. You’re strong. Draw on the power within. I know you can make it.” I loved that she spoke as if we were athletes in training. She encouraged us to be mentally strong and push through the difficult terrain. This was the opposite of boring.

For the first time ever at a gym, I lost track of time. It wasn’t long before I experienced the spirit soaring, endorphin kick I’d read about and envied for a lifetime. The physical exertion became addictive. As the sweat poured, my stress evaporated, leaving me calmer and more focused to face the day. On the drive home, I mulled over the fact that less than 100 years ago, only half of American women who reached 20 lived to see 65. Maybe here’s where I should mention I grew up without ever learning to ride a “two-wheeler.”
How proud I felt for slaying another dragon… accepting the challenge of mastering something unfamiliar and difficult.

With spinning, concentrating on personal fulfillment replaced mindless jumping. Free to progress at my own pace, I never again worried about not knowing my place. I was amazed how instead of being intimidated by the younger, more coordinated students in a class, how exhilarating feeding off their energy can be. Since no one knows (or cares) how high you turned up the resistance on your bike… or exactly how fast you’re going… you compete only with yourself. And win every day.

There are women in my class recovering from knee surgery, even back surgery, who spin safely. To me, they look closer to their prime than over the hill. I seriously doubt most of their children have greater reserves of stamina and fortitude. Everyone from the fitness elite to those in rehab, from high school seniors to actual seniors, thrive being in a group environment while at the same time, still able to work at their own individual level.

Oh, and have I mentioned that I lost twenty pounds… that my borderline blood pressure is now normal… and that while I refer to my shapelier upper legs as my “new” thighs, my husband calls them my “old’ thighs. I am also the only one of my friends who is able to identify the top ten most popular songs at any given moment, thanks to the music chosen by my spin instructors. But best of all, at an age where I’m collecting Social Security, who knew I’d realize I am stronger, fitter, and more tenacious than my younger self ever was?