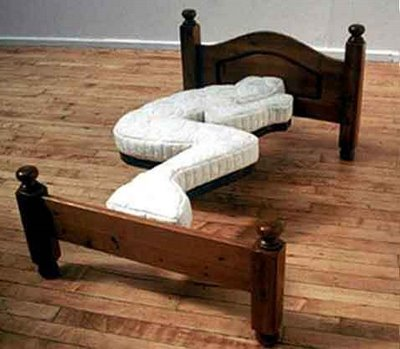 I’ve been married twice.  There.  I said it.  We’ll talk about that some other time, but I woke up this morning, and lying (alone) in bed in the chilly dark room, I was reminded of something my mother said to me during a lull in the reception at my first wedding.  We were sitting on the stairs leading to one of the side rooms at the club where the party took place.  Weary from dancing, and greeting people, and the general events of the day, I commented that I was looking forward to going to bed. She said to me “…well, you’re a married woman now.  You’ll never look at sleeping alone the same way again…”

My mother tended toward the cryptic and anecdotal when she had something important or profound to say.  Over the years I learned to decipher many of her messages, but this is one that always remained a bit of a mystery.  At the time she said it, my mother had been married for 37 years, so there are a number of different directions I could, and have gone, with this comment.  I’ve never really been able to settle on a meaning for her statement, but I do know that I do view sleeping alone quite differently now than I did 5, 10, or even 20 years ago.

For 20 years following her proclamation on the staircase, I rarely slept alone.  If my husband wasn’t in the bed, there was usually a child or two taking up precious horizontal real estate.  The nights when I did have the bed to myself, I relished the silence, the ability to sprawl, to have the perfect amount of covers and pillows, to read with the light on or watch my chosen TV channel.  There was a freedom and remembered familiarity to sleeping alone; something that I relished and craved, and I often thought of my mother and her odd statement on those nights when I drifted off in solitude.  I often slept soundly and deeply on those rare nights, as if my psyche was relinquishing a need to be available because there was no one to disturb my slumber.

These days I equate sleeping alone with a heavy solitude.  It’s not the act of falling asleep by myself.  It’s the waking up and being alone.  Crushing fatigue puts me in a coma moments after the light is turned out, but when the night demons come knocking, or the thud of the newspaper hitting the steps awakens me in the pre dawn haze, the absence of another human being in my bed makes me feel markedly isolated.  The magnitude of responsibility looms larger when there isn’t another person to deflect the business of the day.  There is no one there to offer reassurance or warmth, nobody to share a moment of togetherness, even if you won’t be in same physical or emotional space for the next 12 or 24 hours.  There is an emptiness to being alone in the bed which permeates other areas of your day and parts of your life.

I think of my mother often and what she may have been trying to tell me all those years ago.  I am continually at a loss, believing perhaps that I have ascribed too much significance to what may have been an off the cuff comment.  But I do think about sleeping alone and how my attitude has changed over the years.  There was the point where I couldn’t wait to sleep with someone, then the stage of craving space, and now the feeling of wanting not so much a sleep partner, but a partner to share the burden.

Perhaps learning to sleep – and wake – alone is part of a growing process that comes with being single (and maybe even married) in mid life.  Or maybe it’s not even the sleeping and waking part, but the learning how to do things independently and as an individual that is the real lesson to be learned when you realize there is no one to give a honey do list to.  I’ll consider this tomorrow morning, which promises to be equally chilly and dark.

But if anyone reading this can shed some light on what my mother may have meant all those years ago, I’d love to hear your thoughts….

Sara is the writer and publisher of Blue Blinds, Boston Editor of The Fashionable Housewife, and a contributor to BeClose.com.