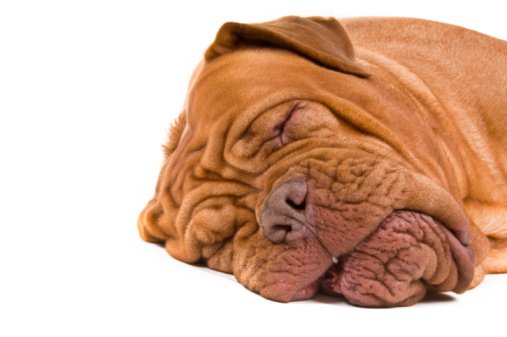 It’s three a.m. and the mass lying on its back next to me is emitting unearthly sounds. I awaken, surfacing from a dream in which I’ve tried to weave the snorts, rasps, whistles, and jagged breathing into the plot. Clad only in a polka-dotted bikini, I’d been floating through a field of daisies towards Freddy, my third-grade boyfriend, while my husband lay serenely unbothered by his own tortured cacophony.

I love my husband. We spoon perfectly, taking comfort in one another’s warm, pliant presence. Randy and I watch TV shows and tennis tournaments in bed, snuggled with our small mutt Zadie, all of us munching popcorn.

Awake, we’re blissful. But turn off the lights, shut off the electronics, and we join the ranks of couples contemplating divorce. Sleep divorce, that is.

Apparently, we’re in good company. In a recent survey of 3,000 Americans, nearly one-third report they’re considering separate bedrooms. Another study found only 60 percent of us are sleeping with our partners. And of that 60 percent, experts predict probably half are miserable.

How did Randy and I get here? First, he snores. Not the gentle, metrical kind. Even the dog, albeit dainty, generates her own distinctive sounds, a cross between a purr and a gentle snort. But she’s adorable.

Next, Randy gets up to pee. Sometimes multiple times a night. We’re both over 60, so this is a thing. Awakened by his movement, I need to go. I debate the urgency long enough that he falls back to sleep. By the time I capitulate and squirm out from the covers, I’ve awakened him. Only Zadie remains dormant. Releasing her sweet noises.

We fall asleep again. Until a trickle of perspiration meanders down my cleavage. Panicked, I cast off the blanket, knowing I’m seconds away from a sea of menopausal sweat. I jostle Zadie. She relocates her tiny head on Randy’s pillow. He mutters something remarkably like, “Crazy bitch,” but I know I’ve misunderstood. She is, after all, the cutest dog ever.

And so it goes. Hour after hour. Night after exhausting night. How can it be that  the bonfire we used to ignite in bed has been replaced by an urge to drape a pillow over my husband’s gaping mouth and apply firm, unyielding pressure? Instead, I swap my earplugs for earbuds and turn on a podcast tedious enough to lull me back to slumber.

Sleep, when practiced correctly, should consume a full third of our lives. To achieve that, the Centers for Disease Control and Prevention recommends we get at least seven hours a night. Proper sleep allows the brain to recharge and lowers stress. Without it, they say, we face increased risks for high blood pressure, depression, and diabetes. Cranky and resentful, we often blame our partners for our fatigue.

But what are grounds for a sleep divorce? My own informal survey, conducted last night in our bedroom, concludes that snoring, sleep apnea, restlessness, frequent bathroom forays, grumpiness over a dog sharing the bed, disagreement over room temperature, and stealing covers are leading contenders.

Therapists suggest that couples discuss the idea of sleeping separately in a thoughtful, sensitive way. My approach goes something like this: “I CAN’T TAKE IT ANYMORE!” As I wail, Zadie maintains her Zen-like breathing, sprawled across my pillow and consuming at least half my side of the bed despite her diminutive stature. Randy’s response?  A burbling sound reminiscent of a death rattle.

When fully conscious, we often discuss options for a permanent place to retire. “Look!” I say, showing him photos of charming cottages in a 55+ community in South Carolina.

“Dual primary bedrooms,” Randy reads over my shoulder, “with individual sleeping quarters, closets, and bathrooms.” His tone is noncommittal.

We read on about “flex” or “snore and more” rooms that offer an escape hatch adjacent to the master bedroom, nodding in approval.

Occasionally, when one of us is battling a cold or just feeling exhausted, we opt for a night in separate bedrooms, a trial “divorce.” Zadie and I watch as Randy good-naturedly gathers his overnight necessities, banished to the guest room. We bid each other farewell, each covertly giddy at the idea of a bed to ourselves. As soon as he’s gone, I turn the thermostat down to 67, cast off the comforter, and gather Zadie into my arms. We gaze lovingly into one another’s eyes.

I read until the words blur. As I turn off the lamp, Zadie emits her rhythmic snoring. But the bed seems suddenly enormous. And empty. Now wide awake, I picture life without Randy, my solitude causing a rising sense of anxiety. What if he dies before me and I’m left sleeping by myself night after night? Wouldn’t I want these disrupted hours back, miss the sound of his slippers padding to the bathroom, long for the sudden mucusy snorts that mean he’s alive and well, close enough to wrap my arm around?

I tiptoe down the hall and peer into the guest room. Randy is reading his Kindle, its gentle glow illuminating his weary face, the passage of years, the losses he’s endured. He pats the bed next to him and closes the device. I curl into his side. He draws me closer. Minutes later, in the darkness, we hear a small thump as Zadie joins us, nudging me to make room.