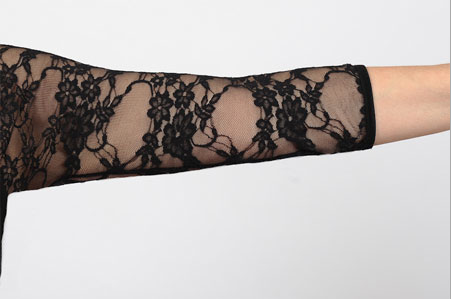 She Did It: Sleevey Wonders

Like many of us of a certain age, 58-year-old Ruthann Greenblat has a story. But what a story! Less than nine years ago, she was in intensive care fighting for her life, and subsequently bedridden for the next four years. (Very long story short: She had Stevens – Johnson syndrome, with complications from untreated Lyme Disease as well as an immunoglobulin deficiency.)

It was during her illness and subsequent recuperation– the Diamond, CA-based resident had a lot of time to think and heal – that she started pondering the subject of her arms, specifically that fleshy underarm part. Because Ruthann loves fashion — including sleeveless and strapless tops and dresses, but didn’t love the look of the bare arm dangle she was developing – she considered an alternative. “Covering up with a sweater or jacket often provoked a hot flash, or hid the beautiful look of my dress,” explains Ruthann. “What I needed were independent, interchangeable sleeves that would slim my arms without making me too hot or ruining the look of my outfit.”

And so: the Sleevey Wonders was born, a unique patent pending invention that solves those problems, and gives the illusion of being part of your top or dress.(Think adding reversible slip-on white or black sleeves to your favorite sleeveless outfits.) Best of all: it helps you create new sleek and stylish outfits from items you already own in your closet, and all products are proudly made in America.

Her advice for other 50+ women ….especially those who think they can’t do something because of an injury or illness? Recognize that creativity helps in any healing process. “When I was too weak to even lift my head, I listened to guided meditation cd’s, and spent a lot of time fantasizing about being well,” she says. “When I could sit up a bit, I drew in a little sketchbook, and wrote my thoughts down. I cut out inspirational words and articles that I would read over and over again. I let myself read and watch old movies for that “on vacation” kind of pleasure, even though there were times my pain took over and consumed me.

“I fantasized about three paintings I wanted to make when I got better, Emergence,  Windows, and Hope – all three of which are now hanging in my home as reminders to be grateful!” And, of course she invented a sleeveless wonder that was recently included in The Four Seasons Grammy Awards gift basket.

Check out her product at www.sleeveywonders.com.

She Did It: Sleevey Wonders was last modified: April 3rd, 2012 by Jeanne Muchnick