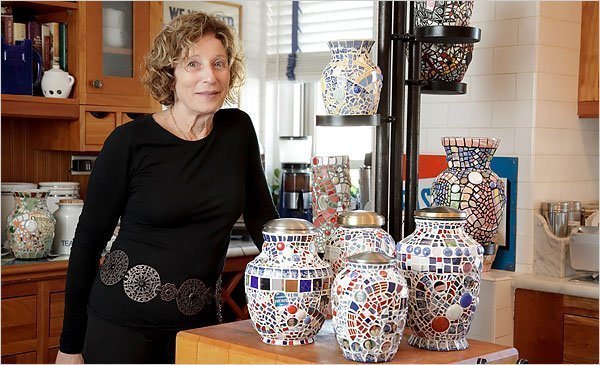 From Comedy Writing to Mosaics/She Did It

After a successful run as a comedy writing team (“The Mary Tyler Moore Show,” “Maude,” “Alice,” “Barney Miller,”Growing Pains,” and “Northern Exposure” to name a few), my husband and I got hit with a financial crisis that was nothing to laugh about, serious enough so that we would have to retire from retirement. Though people our age are trusted to make life and death decisions on the Supreme Court, we would be considered too old to write an episode of “2 ½ Men,” meaning we had to come up with other careers.

“Why don’t you turn those beautiful mosaics you do into a business?” a friend suggested.   For many years, I’d been designing mosaic art, working in the French style known as pique assiette.  I got fired up about it after spotting a picture in a magazine of a chest of drawers covered in blue and white plates. Though it was out of my price range, I visited it repeatedly (okay, I was guilty of stalking a dresser).  This did not go unnoticed, and the gallery owner suggested I take a class they were offering.

I was provided with a 15″ square piece of wood, nippers, plates meant to be broken and tile cement.  I’d never taken an art course and was the only one in the class with no experience doing mosaic, but I was determined. Though furniture and framed mirrors were their specialty, I used my new skills to design vases and other smaller functional items.  In time, I became confident enough to develop a style of my own, finding plates on eBay with unusual images — Warhol soup labels, a British metro map, French restaurant menus, wine labels and musical symbols.  Discovering that I was able to dazzle myself created the possibility that others might have the same reaction.  I experimented with picture frames, candlestick holders, lamps and utensil caddies.  Each new project was both challenging and exciting.

To stay fresh, I found ways of personalizing my work and figured out how to include photos in the mosaic pattern.  The process also enabled me to snip names from invitations and business cards to include with the photos.  These proved popular as gifts for newlyweds, a graduation, birth of a baby or to make any occasion more special.  Working pictures into a mosaic pattern allows me to design biographical vases that chronic personal and professional accomplishments.  Liz Smith, Rob Reiner, Lily Tomlin, Mel Brooks and Carl Reiner are among the celebrities who own these lifetime achievement vases along with others whose names are less well known.

Wanting to combine satire and mosaic art, I created what I call my “Breaking News Series,” red, white and blue pieces that comment on America’s current political and economic crises.  A favorite has photos of politicians who’ve been caught in sexual scandals. Cremation urns seemed fitting for these, and led to my doing urns that are actually usable, both for people and for pets.  I see these not as cremation urns, but as “creation urns” that celebrate life.

An encore career is not for sissies.  I’ve had to hire a web designer and learn how to take photos of my work, promote myself on Facebook and master packing to please the finicky Fed-ex lady around the corner.  I calculate tax, deal with bubble wrap and enter art competitions, pick grout colors and then dig out grout from under my nails.  Our home looks more like Home Depot, and we are always at risk of stepping on plate shards.  I am currently preparing to have my work in a Woodstock gallery and am preparing a vase with images of the concert, artists and the town.  Additionally, I am collecting plates with country and farm stand designs that will be fitting for those with homes in the area.

If I would previously have described my life as “comfortable,” I would now call it “productive.”  My mosaic art can be seen on www.sybilsage.com.

From Comedy Writing to Mosaics/She Did It was last modified: June 3rd, 2012 by Sybil Sage