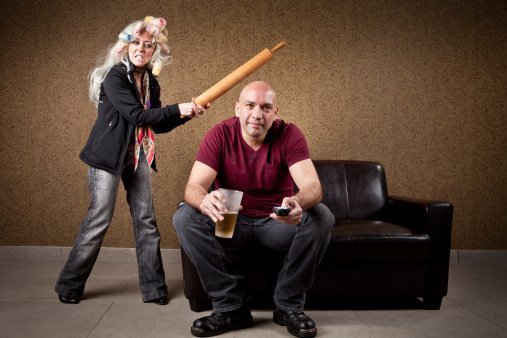 I think we gave it a good shot.  Even so, in the beginning, I felt fairly guilty and thought that our failure indicated that our 27 year marriage was headed for trouble. But, it had to happen, because the harder we tried, the more miserable we both got.  The final straw came on a cold winter’s Friday night when, finally, about an hour into what has to be Transformers 16, I jumped out of the recliner, and officially called it quits.

I know that sitting in that recliner for as long as I had was pretty admirable.  But, because I felt terrible, and am no quitter, I hesitated.  Finally, though, I had to save my soul and so I pressed pause, an action that caused my husband to become apoplectic in the two seconds it took me to spit out, “I’m sorry, but this mindless drivel is simply more than I can take.  I’m done.  I’m going into the living room. Please, go ahead; enjoy, roll around in the sheer joy of watching those cars turn into giant robots that fight each other while leveling rather large cities.  Listen to them say things like, when our people came to this planet, we sought peace, but your machines today are too inhuman and impersonal.”

He looked at the clicker in my hand and nodded. I said, “I’m officially done.”  He said, “Ok, just give me the clicker.”  Once again, my suffering, my angst, my efforts had all gone unnoticed.  Geez.

I can’t stand 24-hour news programs where everyone yells at once, talking over each other and somehow managing to say absolutely nothing.  I start to twitch when he clicks between hockey on one channel and then baseball on another.  Isn’t hockey a winter sport??  I refuse to sit through “The Lord of The Rings” again, and I simply cannot tolerate one more “Alaska State Troopers,” “Caught On Camera” and “1000 Ways To Die.”  Some of those shows actually keep me up nights.

To be fair, when he comes into the living room with me to watch, and starts to roll his eyes with that are you kidding me look during yet another birthing scene on “Call The Midwife,” I get it.  So, it’s not for him.  Neither is “Mr. Selfridge” or “Downton Abbey.” But at least, I’ve never asked him to watch “Dance Moms.”  Even I know when to draw the line.

I’ll give him credit because, in the beginning he tried to sound concerned and said things like, “Shouldn’t we spend this time together?  I’ve been at work all day.  Let’s find something we can both watch.”  But once we realized we were happier watching different things, we gave up.  He hates “Survivor” and cannot fathom how I’ve seen every season.  I despise “Agents of Shield,” stupid guy comedies and can’t understand how he still watches “American Idol.” Shows like “Dancing With The Stars,” which one might think would be something we could watch together don’t do it for either of us. In the good old days, there weren’t as many shows to choose from and you couldn’t DVR anything. Now, with premium channels, DVR and Netflix, we will never find common ground.  I am ahead entire seasons of shows he’s never even heard of.

Maybe it’s not so bad.  So far, we still like each other and this trial TV separation is going swimmingly. I’d even recommend it. Who knows, we aren’t closing the door on the idea that maybe we will find something we can enjoy together, but until then, everyone is happy in his own little room with his own little show.

Also, at least for now, we are still in the same bed, although his back was out this week that made for some pretty miserable nights for me.  (When he sleeps on his back, “to let it settle,” he’s got a 4-foot high mound of pillows under his legs, and in that position snores like something distinctly inhuman.) I’ll admit I fantasized more than once about going to sleep in one of the multiple empty kids’ bedrooms we’ve got down the hall.  Peaceful, I’d imagine…

We aren’t ready for that yet, however.  But who knows, I’m open to whatever keeps us happy and together.

So, do you and your husband watch TV separately or together?  If you’re still together, please share your favorites.  Maybe there’s hope for us yet.  But if not, no judgment please…:)

Separate Beds…Not Yet. But, Separate TVs? Absolutely! was last modified: May 5th, 2014 by Leslie Conway