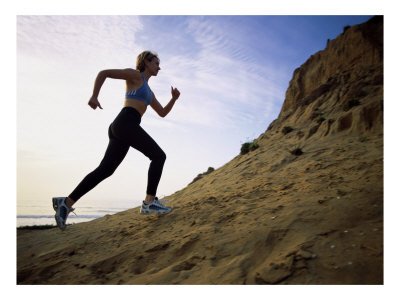 It all started when my youngest of four, my 12 year-old daughter, wanted me to run with her.  “Let’s get up at 6:30, so that I can run before school,” she offered. 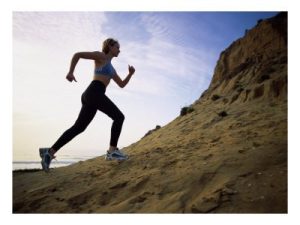 “Great”, I said, trying to muster a bit of enthusiasm.    And, at 6:30 the next morning, out the door we ran.  We live on a flat block, which gradually inclines up to the Presidio.  At the Presidio entrance, the hill continues to the top about 500 yards up, but at a much steeper incline.

As we reached the Presidio entrance, I told my daughter, “I don’t run up this hill,” making some excuse.   “Don’t let me hold you back though,” I said.  And, she didn’t.

When I arrived home, my daughter was already eating breakfast.  “Wasn’t that great?” she said enthusiastically.  “Let’s do this every other morning!”

“OK,” I said.  “Although, you ought to check in with yourself to see how you are feeling later in the day.  It may make you a bit tired.”  The idea of doing this every other morning was already making me feel a bit tired.

As we reached the steep incline at the Presidio gate, she turned to me and said “Mom, you can do this. Visualize the hill as flat and run up it.  It is all in your head.”

And in my foggy, 6:30 brain, something clicked.   I’m not sure if I needed to model what a 50 plus mother is supposed to do or if my competitive instincts got the best of me, but I ran…very slowly to the top of the hill…for the first time in a very, very long time.

Our running route is out and back and my daughter is far ahead of me.  After I make the turnaround and come up the final hill before the descent to home, there is my daughter waiting.  “Where did you go?” she asks.  “I decided to wait.  I was worried that maybe you had hurt yourself.”  And, for the second time that morning, I realize that my daughter is “taking care of me.”  And, her concern is all too reminiscent of a time a few years earlier when my college-bound son led me slowly down a ski slope, the easy way, so that I could get to the bottom and out of my skis.

I used to read all of the parenting books; I know that first we are managers of and then consultants to our children as they age.   But, I realize, now that I’m tiptoeing into another phase.  The role reversal I’ve seen between me and my parents is just beginning with me and my children – where instead of being the caretaker, I’m being taken care of.

I’m wondering if I’ll be able to leave my consultant role, because my heart and soul are so much a part of the mix.  I try to temper my advice to my children when asked, hoping that if I do, they’ll ask more often.  It is hard, when you love your children, not to want to help them or head them in the right direction.  We all know that.  The disconnect is that a mother’s desire doesn’t change as her children get older even though the nurturing parent role becomes less and less relevant for them.

So, now I ponder, “What is the role I should be playing with my children?”  My dad recently passed away, and when my four siblings and I gathered at the funeral, we reminisced about what we loved about our dad.  “He thought I was the greatest,” my brother said.  “He would always answer my call with, how’s my favorite daughter?” I added.  I have two sisters, and I knew he answered their calls with the same salutation.  But that was the point.  We all knew he thought we were great – capable of anything.  I think its called unconditional love.  So, I’m warming up to the idea that my role will be that of my father’s – just reminding my children how much they have to offer to the world and how much I support them in their endeavors.

But that begs the question of, what about me?  My parenting job is becoming less time-consuming and going back to my career in finance seems a bit hollow.  That isn’t judgmental; its just that the world of finance resonates a lot less for me now that I’ve been in the trenches raising kids.  I wish it weren’t so.  So, where do I go from here?  What do I do next?  I really don’t know.  I guess I’ll just start by running a little more quickly up that hill.