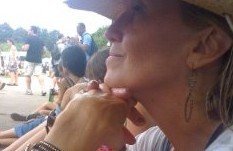 I guess you could call me a rocker mom. But I hate that term because you’re probably envisioning me in a leather vest with too tight tank underneath, a bunch of piercings, tattoo or two (bad ones in bad places) and something funky with my hair. Nope. Not me. I’m actually like you. I’m a 54-year-old mother of four, live in Chicago with my husband Mark, empty nester, boomer, challenged by the aging thing, but embracing it as well.  Probably the only difference is, I started a music business five years ago that’s been my passion, my baby, as Mark call’s it, our fifth child…

I like the idea that I’m Better After 50. I’ve earned it with hard knocks, missed boats, selflessness and self-help strategies. Maybe the reason I’m Better After 50 is because I’ve lowered my standards as I’ve gotten older, so I succeed more. Or perhaps I’m Better because I can’t remember what my goal even was. No, it’s because my girlfriends surround me with support and praise, which makes me think I’m better… At this point there’s only so much I can do to improve my looks, my weight, my memory, and my tolerance for learning curves. On those, there’s no getting Better…

But there’s one arena where I know I’m Better – because I’m 50 – and that is motherhood. It’s not that all of a sudden I’m more patient, calm, and clairvoyant. It’s not that my kids are all grown up and it’s easier now. Ironically, it’s the opposite. I’ve actually become better at mothering because I’ve gotten much busier at mothering. I’m sort of everyone’s mother now.

If you’re over 50 you absolutely understand what I mean. You mother your own kids. But life has branched out. A lot. You’ve picked up other mother relationships along the way. A mother in law, a daughter in law, a sis in law who mothers your brother’s kids.  You mother an elderly friend, or a friend who lost her mother, or your son’s girlfriend who doesn’t get along with her mother. You give mothering advice to your neighbor, the woman next to you on the plane, your younger friend who just had a baby.  When you’re over 50, it’s funny, now that your own kids are almost grown up, others need you.  You mother your friend who’s ill, and she mothers you after your surgery. It just feels right.

And I figured out how to share my music too with all my friends and it’s taken the form of a business. My site is Valslist.com, a boutique website with one mission:  helping busy adults keep up with new music.  I launched the business because there’s a problem in the music industry, and I wanted to fix it.  The problem is, boomers, in general, have lost track of new music. Not everyone, of course – if you’re a music hobbyist like me, I’m not referring to you. But many boomers haven’t been able to keep up – and it’s not their fault.  Think about where you were in April 2003 (when Apple launched their digital music store iTunes) … yup, you were probably busy in a career, having your kids, raising a family.  The digital music world accelerated and may have gotten away from you. As your kids grew up you simply asked them to download for you, and that was that. But be honest: do you really love the music they give you?

I say don’t settle. There’s better music out there than Top 40. It’s just harder to find. So we do it for you. Valslist keeps up with the newest artists, hand picks the best tracks, and arranges them into easy to download playlists.  Every track is hand picked by me. This isn’t old people’s music, this is music that your kids will envy – they’ll ask you where you got it.  I’m a rocker mom who wants to introduce you to new artists you might not find on your own. Happy Mother’s Day. ROCK ON!

MOM, YOU ROCK   (a mix of cutting edge tracks from new artists) – download this playlist Valslist.com