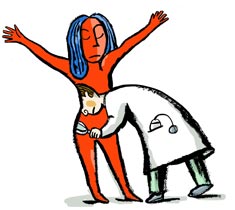 This weekend marks a significant anniversary in my life. My life was saved exactly half a lifetime ago. I was 27 years old 27 years ago when I was diagnosed with colon cancer.

I had no family history. I was young, healthy and fit- not exactly a high risk candidate. Yet there I was, spending the 1984 holiday season being probed and tested for a variety of symptoms that had grown too worrisome to ignore. Sudden weight loss (at 27,  I wasn’t going to question  that one!), fatigue and crippling abdominal pain were more than just stress due to a hectic season and home remodel. As the saying goes,” Father (and Mother) knows best.” My parents took one look at me and knew I needed to seek medical advice. Through a series of tests, the cancer was diagnosed. Stage 2. Still treatable. Phew.

The tumor was surgically removed in January of 1985. I needed blood transfusions at a time when AIDS was known, but blood banks did not yet screen donations. It turned out that my immediate family and I do not have the same blood type so my friends rallied. Even friends of friends including the big, strong football playing father of my college roommate who paled at the sight of blood. I am so thankful. Surgery, an extended hospital stay and consultations for follow up treatment (what do you do with a young woman with a disease that occurs primarily in an older population?), not to mention recuperation consumed the next few months.

The medical team that cared for me was wonderful. I am thankful they never questioned or dismissed my symptoms. I cannot begin to fathom the pain and fear that my parents must have felt. They spent each day and evening at my bedside sandwiching the hospital visits into their own work schedules. They were unwavering in their care and love as they still are today. My husband, who did not marry until his late 30’s, certainly wasn’t expecting his younger wife to face a life threatening disease. He stepped out of his worried husband role to become my advocate extraordinaire. This was in pre- internet age when research and communication were done painstakingly over the telephone. I am beyond thankful for him.

Years have passed — literally half of my life — yet few days go by when I do not think of my journey. My surgical scar, running from stem to stern, is a reminder and a badge of courage. I don’t wear my past on my sleeve. I’m sure many of my current friends may not even be aware of my history. I do, however, speak of the importance of screening, especially since we have passed the mid century age. It concerns me that my own children are in a higher risk category because of me, but I am thankful that medical advances are such that this disease is treatable. At my age I have lived long enough to have lost friends to disease. I am thankful that each January 14th passes and I am here to live another blessed year.