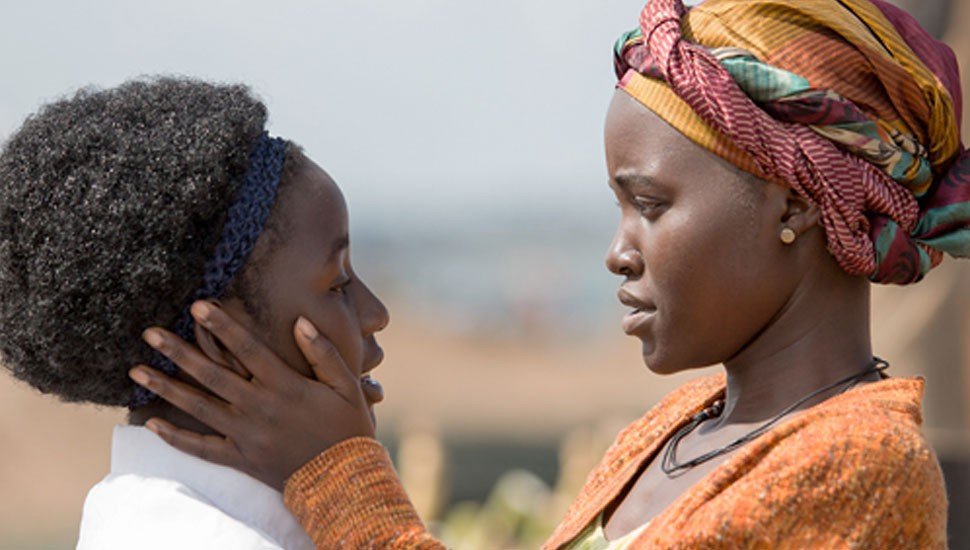 “Queen of Katwe” Makes All The Right Moves

QUEEN OF KATWE is based on one of those impossible but true stories of triumph which has found life on the big screen. Thanks to a cast of talented, affecting actors and a smart, compassionate, and inspiring story teller behind the camera, we learn of an impoverished young girl from Uganda who is introduced to the game of chess– and becomes a champion.

Oscar winner (“12 Years a Slave”) Lupita Nyong’o plays the strong mother to the brilliant Phiona Mutesi a 10 year-old who discovers she has the instincts of a wiley strategist on the chess board. David Oyelowo (“Selma”) as coach Robert Katende teases out her innate feistiness to guide her to the “safe square”– in life and on the board– and she learns a few daring moves along the way.

Produced by Disney, the film is clearly a departure, Phiona’s rugged life unfolding against a backdrop of extreme poverty in the poor slum of Katwe in Kampala. The film was in fact shot on location there with locals playing many of the smaller parts. Director Mira Nair lingers on these faces, capturing the vibrant color and rugged texture of life there,  making this exotic world immediately personal.

She also guides newcomer Madina Nalwanga as Phiona through a performance that is natural and charismatic, contained yet powerful. We are instantly absorbed by Phiona’s plight– a bright young woman with few prospects. For her, the game of chess offers a map and a metaphor for a way out of her impoverished circumstances: in chess, a pawn can become a queen, or as this lovely screenplay succinctly puts it “The small one can become the big one.”

The film remains relentlessly upbeat despite the hardship and struggle of Phiona’s widowed, uneducated but fiercely protective mother who fights eviction, monsoons, and the lure of inconstant men offering questionable relief, and instead sells maize to feed herself and her children. I saw “Queen of Katwe” at a matinee in a suburban theater full of American kids who were cheering for this African girl a continent away living a life they had most likely never seen. In fact, it’s a world and a story seldom seen in mainstream features. That for me was worth the price of admission.

The movie doesn’t provide all the answers, but it asks all the right questions. There’s a recurring scene in the movie, where Phiona is walking through her muddy, rundown village and a neighbor working nearby calls out, “Phiona, how is your life?” Phiona’s answer to this question varies in the course of the film, but what a question. It’s at the heart of the film and propels her over obstacles physical, emotional, and psychological, a question that pulls us all out of ourselves– if we let it. Be inspired: see QUEEN OF KATWE, and bring your kids too– let them know it’s good to be the queen of your own destiny.

“Queen of Katwe” Makes All The Right Moves was last modified: March 5th, 2018 by Joyce Kulhawik