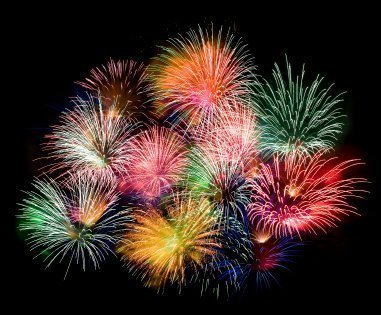 Planning for a Celebration Like No Other: New Year’s 2012 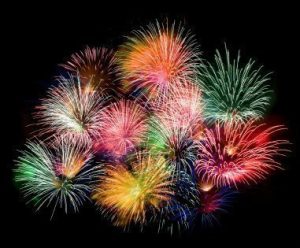 If my son is right, this may be our last New Year’s Eve, so we better make it a good one.  Ever since Eddie watched a History Channel program a few years ago foretelling the end of the world, he has been convinced that the world, as we know it, will come to an end on December 21, 2012.  Most of the so-called Doomsday Predictions are based on a Mayan calendar which has not been used in more than a millennium, using a set of calculations and “science” that I cannot even hope to understand.  I was so tired and confused the night I watched a rerun of Eddie’s life-altering documentary that I fell asleep, notwithstanding the foreboding background music.

As we launch into 2012, Doomsday hype is increasing exponentially.  A recent Google search of “December 21, 2012” yielded 50,800,000 results. The site December212012.com purportedly receives five million page views a month from visitors in 76 countries. The site will provide you with the latest 2012-related signs and predictions, with pages on such topics as the “earth’s wobble,” the “transformation of human DNA,” and “galactic realignment.”  NASA has a whole section of its website devoted to debunking Doomsday predictions, assuring the public that “nothing bad will happen to the earth in 2012” (as if nothing “bad” happened to the earth in 2011).  Over a thousand books about the end of the world are available on Amazon.com, and an “Ask an Astrobiologist” website notes that it has received nearly a thousand questions about the fictional planet Nibiru, which apparently is due for a collision with earth on that very day.  Heck, even my rabbi’s sermon this past holiday season was based on end of the world as we know it.   Doomsday is everywhere.

“Our earth is degenerate in these latter days. There are signs that the world is speedily coming to an end. Bribery and corruption are common.”

It appears that just about every religion and every cult imaginable has had a theory about the end of the world:  Quakers, Indians, Christians, Methodists, Jehova’s Witnesses, Pyramidoligists, Rapturers, and, of course, the Mayans, to name just a few.  (Go here if you don’t believe me: http://www.abhota.info.)

End of the world predictions have been lucrative business for “prophets” throughout history, and this year is no exception.  If you haven’t booked your December trip to Mexico yet or purchased your 12/21/12 T-shirt, there’s still time.  Zazzle.com has 348 different “end of the world” styles to choose from, most of them in the $20 range. I am partial to “Party like its 2012” or the simple, “We’re all gonna die.” 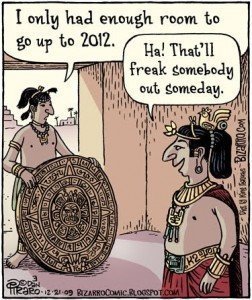 Preparation for the big day is also big business.  Survival sites encourage storing food, water, guns, cash and emergency kits in your underground shelter. Fortunately for my family, we have plenty of bottled water and supplies left over from Y2K.   I think we’ll skip the survival planning this time around.

If my son is on to something, and the world will end “as we know it” on December 21, 2012, those few qualifying words are key.  It could mean mass destruction by plunging asteroids, planet collisions or pole shifts.  It could mean the beginning of a new “Golden Age” for humanity.  Or that day might mark the invention of something really cool, like the IPad, which ended my world as I knew it this past November, when I received my fabulous birthday gift.  The fact is, the world as we know it changes every single day.  December 21, 2012 will be no exception.

For my last New Year’s Eve before 12/21/12, I plan on doing what my son does, notwithstanding what he says.  You see, uber-happy is Eddie’s normal.  Perhaps he is blessed with an excess of serotonin, but Eddie has a remarkable ability to spread laughter and joy to his family, to his friends and to perfect strangers, despite his sincere belief that the end of the world is near. To acknowledge the scary, stare it down and beat it up with a profound love of life is my ideal for 2012.  As I enjoy New Year’s Eve with wonderful friends, I hope that I can have some part in spreading joy to them that night, and for the rest of the year.  And when I am cleaning up the mess in the wee hours of January 1, perhaps I won’t complain, because maybe, just maybe, I won’t have to bother next year.

Planning for a Celebration Like No Other: New Year’s 2012 was last modified: January 23rd, 2012 by Ronna Benjamin