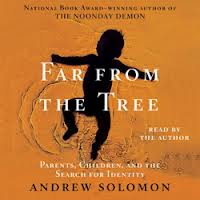 “Parenting is no sport for perfectionists,” writes Andrew Solomon in his rich tome, Far From the Tree: Parents, Children and the Search for Identity. Solomon’s 700-plus-page book—an 11-year undertaking—is a vivid portrayal of children who are born or grow up in ways that their parents never expected. The book is also a memorable catalogue of how parenting can be one long mystery tour that often mixes utter desperation with boundless joy.

Consider the heart-breaking example of the mother of an autistic child who, Solomon reports, has only spoken four times in her life. But each time her response was “appropriate to the situation.” Given that brief glimpse into her daughter’s psyche, the mother frets that her child’s soul is trapped in her body. How many of us have felt that way when a child has lost his way or becomes a stranger to us?  How many of us have turned to our partner after we brought home our new baby and said, “Now what?”

What to Expect When You’re Expecting always struck me as an ironic title for an advice book for pregnant women. There is no primer for what happens when the doctor sees an abnormality on the twenty-week sonogram and your child may be a dwarf. Or amniocentesis shows an extra copy of chromosome twenty-one and your child has Down Syndrome. Maybe your baby is closing in on turning a year old and doesn’t look you in the eye. He hasn’t uttered a word yet. That happened with Adam. We were lucky parents. It turns out that he was severely far-sighted. At ten months he wore his first pair of glasses and a few days later he crawled on his own.

But parenting isn’t just about happy endings. It’s often about the little victories within the bigger battles. Solomon is intimately acquainted with what happens when a child doesn’t meet parents’ expectations. He was dyslexic as a child and came out of the closet as a teenager. Far From the Tree grew out of a 1994 article that he wrote about deafness for the New York Times magazine. In the course of researching and reporting, he realized that issues surrounding deafness were not unlike the challenges that he faced as a gay man. A few years later, he saw the same pattern after watching a documentary on dwarfism. He eventually expanded his theory on identity and outsider status to include Down Syndrome, autism, schizophrenia, children conceived during rape, and children who become criminals.

While this may seem like a hodgepodge of various conditions and situations, Solomon unites them by distinguishing between vertical and horizontal identities. Vertical identity is handed down through the generations such as religion or racial identity. If a child’s parents identify as black in all likelihood so will that child. Horizontal identity arises from a break between the reality of a child’s life and the parents’ experiences. For example, a deaf child navigates the world very differently than her hearing parents. I found it fascinating that Solomon included prodigies alongside conditions that have otherwise been stigmatized throughout the centuries. The mother of a child who entered college at the age of nine was as bewildered as the parents of a disabled child.

Solomon explores family dynamics, seeking common ground among families who find themselves with children they never expected. Most of the parents were grateful to have the children they had. What might have been initially frightening or insurmountable for these parents had been transformed into a deep, bedrock love for their children.  In a recent interview on Salon.com, Solomon noted:

“I found that there is so much that [these familys’] experiences have in common—that process of accommodating, accepting, loving, even celebrating a group. It didn’t matter whether we were looking at what the child did, as we were in the crime chapter; or how the child was born, in the Down Syndrome chapter. That was consistent. And it had a lot in common, in my view, with the experience I had negotiated as the gay child of straight parents. And so I think that sense of difference is actually something that almost everyone has in common, rather than something that isolates people.”

In Solomon’s view reproduction is an imprecise term. On the very first page of the book he talks about having children as an act of “production.” We just don’t know who or what we’ll produce as parents. And if we have toss aside perfectionism for imagination and acceptance, the one thing we’ll get in return is realizing that love for a child is like no other love in the world.