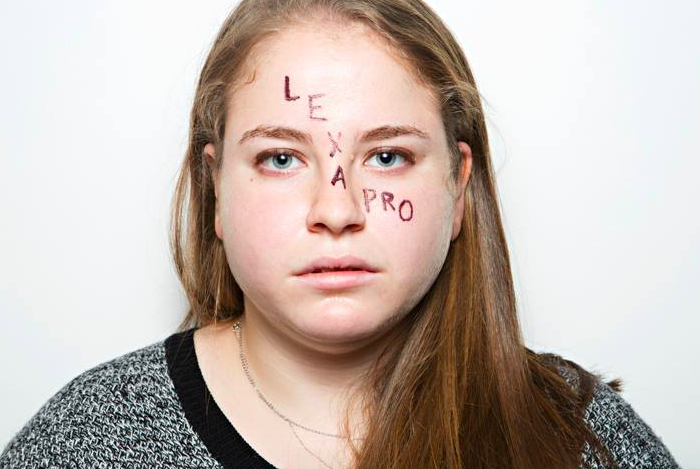 Panic Disorder: How Lexapro Saved A Mother And Daughter

The panic attacks almost always happened deep in the night, their after-effects rippling through my life like the aftershocks of an earthquake. The first happened the summer before my junior year of college. I was sure that my heart would explode. But my heart didn’t blow up. Instead, its rapid, loud, insistent beat filled my head, and I rocked back and forth in bed until the sun came up.

Panicking, I quickly learned, was exhausting. Anticipating the next attack was grueling.

Panic afflicted my gaunt sepia ancestors; it has walked with us hand-in-hand for generations. We are a people who open doors to empty rooms, expecting to see our worst fears incarnated. It’s difficult to articulate what exactly those fears are. Some of them can be as nebulous as the panic and depression that have smothered the Latina and Jewish women in my family.

No one in my family talked about the forced cold showers, the electroshock therapy involved in keeping my paternal grandmother’s anxiety in check. No one said a word about my other grandmother’s body odor, greasy hair, and catatonic states. When I was a child, no one acknowledged that my mother masked her phobias, her phases of panic with bullying, narcissism, and half-hearted suicide attempts.

I suspect that the ghosts of panic that frightened my grandmothers and drove my mother to the brink of insanity have haunted me since the moment I was conceived. And when panic first happened to me, the machinations it planted in my mind threw me into a future I imagined so catastrophic that I saw myself completely incapacitated. What if, What if, What if, went around and around in my brain like ticker tape.

Dread and wonder coursed through my body the day I found out I was pregnant with my daughter. How could I be a mother, let alone a decent one? When the panic strangled me in my sleep, I was terrified it would cut off oxygen to my baby. My heart revved up until its beating migrated to my head. I had never taken medication for panic. And now that I was pregnant, I wouldn’t even take a Tylenol.

Throughout my pregnancy I struggled to decipher arguments about nature versus nurture, biology versus psychology. I intuited that between these polarities lay a multitude of explanations for how behaviors developed and persisted not only within a single individual, but also across generations. Would my baby imbibe anxiety and depression through my milk? Would I model it to her? Would she inevitably flinch at my shaky touch?

The baby was beautiful and terrifying. What if, what if, what if? I filled in the hot white blanks with pure disaster. What if I stopped functioning and couldn’t care for the baby? What if I panicked with her in the supermarket? And most chilling of all—what if I had passed down my chipped, inferior genes to her?

“Stop torturing yourself,” said my gentle husband who, at the time, was working on the Human Genome Project. How I prayed that the genes that triggered my anxiety and depression would combine with my husband’s pristine genes, losing their power to hurt my daughter. I fantasized about him hard at work hunting down the gene for what ailed my ancestors, what ailed me. My husband was clearly on the side of nurture and promised me that our daughter would grow up secure and loved.

Nevertheless, I found articles that claimed phobias and panic disorder could very well be inherited. “Genetic switches,” I, practically panting, recited to my husband, “can get tripped and set off chemical changes that occur in a fetus’s DNA, thereby imprinting familial trauma on them.”

My husband shook his head. “It won’t happen to our baby,” he said.

“Because we’ll know how to treat her right,” said my husband the geneticist.

“But what about bad luck—that’s always a factor that could wire our baby for anxiety and depression.” As I spoke, I thought about an observation my therapist made that there are some people who never panic under any condition. The first time I heard him say that, I pictured a flurry of Magritte’s topcoat-wearing men raining down on me. Cradling my newborn daughter, I knew that I could never share the Magritte image with her.

My mother, her long black hair falling out of its bun, frequently pleaded with my father to send her away. “Please,” she begged, gulping for air, “I need to go. Now.”

Over the years, I periodically asked my therapist to commit me too. “You’re just tired,” he said.

What I most remember about therapy with him was that I refused to acknowledge panic in my world. I was twenty-seven, eight years out from my first panic attack. I lived in terror that my world would shrink to the point that I couldn’t leave my apartment. The word “phobia” scared me so much that I asked my therapist to remove a book he had on his shelf with the word on the spine. “I am not that person,” I told him all the while living in fear that I would panic in public without a way to get home.

At the height of my panics, Prozac had just come on the market, and it was touted as the miracle drug for the anxious and depressed. I read testimonials in which people swore the drug gave them their life back. They were newly confident, newly capable, and most importantly, newly happy. The words “brain chemistry” bubbled to the surface in these articles. But I was sure my brain was beyond fixing. And more to the point, taking medication was one of my phobias. Would my memory slip away? Would I feel numb? Would my future children have birth defects? And worse yet, would the pills not work and leave me forever hopeless?

That last question scared me enough to keep me just on the other side of trying Prozac. I could tough it out. My people were scared to death of taking medication. “Do you want to be in La La Land?” my mother taunted me that first summer of panic. “I have two other children to take care of,” she screamed. “”I’ll send you to the Institute for Living,” she said threatening to institutionalize me. Her face was so close to mine I could see her large pores. At the time, I didn’t have the vocabulary to express that I could feel the weight of her mental illness imprinted on my cells.

I had been flirting with the idea of taking medication after I finished having children. A girl and a boy, perfect bookends, a friend said to me. Perfect bookends with an imperfect mother. But I hesitated to take medication. I wanted to be strong. I wanted to beat this thing on my own. But with whom was I waging war? Panic? Myself?

The night I wanted to commit suicide, I had been caught up in a loop of panic for weeks. My two small children slept peacefully as my husband rubbed my back. “It’s time,” he said. By that I knew he meant that I needed to call the psychiatrist I had consulted with for a prescription of Klonopin that I had not filled.

In the coming weeks I took the Klonopin with Lexapro, an anti-depressant. I didn’t feel relief exactly. Instead, I detected emotions coursing through my body, a circulatory buzzing of activity that the medication tamped down. The first side effect I experienced was how hard it was to cry. But the panic drained out of me until it was a bearable, hum of anxiety. And then one day I suddenly realized I was happy. The revelation happened in the car on one of my daily drives to and from my daughter’s school. I had settled into a routine. “You’re a caballo de circo,” my mother chided me when I was a child comforting myself with repetition. Maybe I was a circus horse driving the same route over and over. But on that day I picked up as many of my daughter’s friends as could fit in my SUV. Their chatter delighted me. Their energy soothed me.

I’d proved that anxiety was not an accurate predictor of a situation. This was what I told my daughter when she called me from camp. Just sixteen, she said the world had gone very sad on her. “It’s like there’s a curtain of gauze suffocating me,” she cried. My God, had my genes taken the best of her? As I listened to my girl on the phone, I knew that she was trapped in her thoughts. “What if I freak out in front of people? What if I die?” she said breathlessly. There it was again: What if? What if? Another generation struggling to fill in that sharp, menacing blank. But I also remembered my husband’s wise words—we’ll know how to help her.

My daughter is now twenty-one and also stable on Lexapro. She studies psychology. Her choice of major makes me believe that she wants to cure herself, even cure me. My daughter also knows that hiding is dangerous—even futile—and so she decides to tell the world about her condition with a one-word story literally written across her face. In the photograph, the word “Lexapro” starts across her forehead, goes down to the bridge of her nose, and finishes at her left cheek. “I am not my anxiety,” my girl declares. Her face, her struggle, is her contribution to the “What I Be Project” founded by a photographer who describes it as social experiment. In word and picture, a subject boldly declares that he or she is not solely defined by societal reactions to her life story.

This article first appeared in Fullgrownpeople.com

JUDY BOLTON-FASMAN is an award-winning writer whose work has appeared on the New York Timesopinion page, the Boston Globe, Cognoscenti, The Rumpus, Lunch Ticket, Brevity, Salon, and other venues.Judy has completed a memoir called The Ninety Day Wonder, in which she tries to get closer to her remote father through saying the Kaddish—the Mourner’s Prayer—only to uncover her father’s secret past.