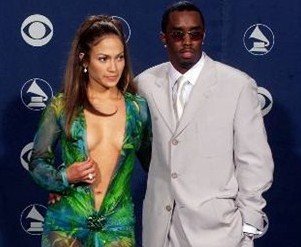 A few weeks ago I spent a good chunk of the weekend in a fashion state of mind.  If I wasn’t writing about fashion or flipping through fashion magazines, I was getting putting together outfits for different events and parties that are on the calendar.  Given the opportunity to indulge my inner clotheshorse was delightful and relaxing – all in all a good weekend!  But one of the best things about fashion trolling is finding all the weird, inappropriate, and inexplicable outfits that make their way on to the shiny sheets.

Many women cut their hair at emotionally pivotal points in their lives (break-ups, post pregnancy, hired or fired from the dream job…)  whether to make a statement or simply to reinvent or reincarnate themselves.  Celebrities on the other hand don’t always have the same luxury to update their ‘dos’ that we mere mortals do.  Perhaps they are under studio contract, or in the middle of filming a movie, or under the iron clad grasp of a stylist or publicist. Their form of expression of personal anguish typically is reflected in outlandish outfits.  It likely harkens back to the infamous photo of Jennifer Lopez in that green Versace  dress. 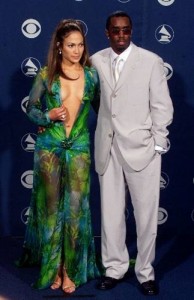 Certainly that dress was a pivotal wardrobe choice for J.Lo, and many would argue that her career really took off after that.  Let us not forget, though, that soon after the picture she and (then) P. Diddy were splitsville, and one can only assume that there was some emotional tension surrounding her clothing choice for that particular evening.  Now that she has moved on from Marc Anthony (who apparently had a fair amount of jurisdiction over her outfits) she’s back to the barely there, baring all outfits of her earlier days: A somewhat curious choice of outfits for the mother of two.  But hey, it’s show biz, right…?

Fast forward several years and we have the fairly recent demise of the annual vow renewal that was Heidi Klum and Seal.  Heidi is an elegant woman – and the mother of 4.  And wrapping up her 4th decade.  She has been under a tremendous amount of pressure with all her businesses and appearances and family responsibilities and so forth, and who isn’t to say if I had her genes/body/bank account/guts that I wouldn’t wear the same dress post break-up to a major gala…BUT…I can’t help think that she crossed some invisible and indefinable line with this dress that she wore to the amFar Gala I know sheer is in these days, and I have my share of sheer in my closet too, but really…not much is left to the imagination.  And frankly, it really isn’t that flattering. I don’t know if Anja Rubik is feeling particularly tortured or upset these days – judging by her eye make up something is going on, and she certainly doesn’t look too happy here – but she too took the sheer trend to the unflattering max at the same event: 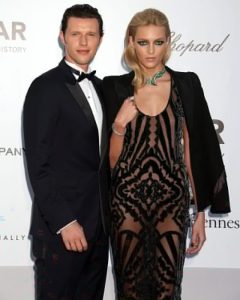 Then there is Tori Spelling.  Poor Tori.  She can’t seem to get out of her own way.  First she gets pregnant less than 6 weeks after giving birth (via c-section no less – ouch…) but then blabs about how she wanted her husband to be attracted to her and think that just because she had 3 kids that their sex life wasn’t going to change.  Right. Personally, if I had a 6 week old baby and found myself pregnant again I’d probably go the major hair cutting route just out of sheer desperation and possibly to disguise myself from the neighbors who surely would be talking about me behind my back.  But I don’t care how anxious or tortured or stressed out you are, there is no excuse for this.  Ever.