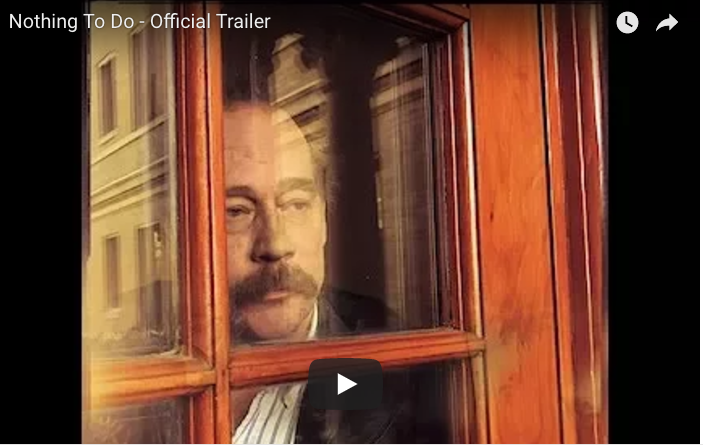 We had a private screening of our just completed independent feature film, Nothing To Do the other day. It was for the cast and crew of the production before it’s submitted to film festivals, and then later, potential film distributors. It was a great way for everyone to get together again and celebrate the accomplishment of creating a film. After the initial nervousness, especially with me, the film’s writer and director, the screening went wonderfully!

Nothing To Do is the story of Kenny, an aimless fifty year old radio DJ from Philadelphia, PA. He’s called to a hospital in suburban Washington, D.C., where he learns that his father Irv, due to many age related physical problems, doesn’t have much time left. The two of them need to discuss hospice. This news is a shock to Kenny. He didn’t know that his father was even ill. Distance can do that. Kenny scolds his father, “You were in the hospital three times? Why didn’t you let me know?” Irv sarcastically tells him that he doesn’t need anyone to hold his hand. Stunned, Kenny goes out to the parking lot to smoke a joint. He is high for much of the film. It’s his way of dealing with life.

Enter Rachel, Kenny’s determined, more accomplished younger sister. She doesn’t see the agony that her father is going through. Rachel believes that if Irv returns to the hospital and gets another doctor, a “better” doctor, he’ll get well. What we discover though, is she can’t go though the pain of losing her father. Her mother had died the year before. She pleads with her father, “Mom just died last year. I can’t go through that again.” The decision of entering hospice also causes tensions between the two siblings to bubble to the surface. “Why did you convince Dad to do this?” Rachel asks harshly. “I didn’t convince him to do anything. I just said whatever you want is fine,” replies Kenny. Frustrated, Rachel snaps back, “Why did you do that?!”

I wrote Nothing To Do after my own father, Joe, passed away in hospice at age 100 in 2012. Although much of the film’s story is fiction; a lot of what “Irv” went through, and how Kenny deals with it, are based on my personal experiences with my dad during his few remaining weeks – the conversations, the frustrations, a few sleepless nights.

My father was a down to earth, stoic man. A provider. When he was in his early 60’s, he gave up smoking and started distance running. It’s one of the things I attribute to his longevity. Even at the end, when the doctors said my father’s systems were shutting down, they marveled at how strong his lungs were.

Like Kenny, being with my father during his last weeks was life changing for me. I had never been so involved with anyone at this stage of life. My mother, a very independent woman, who suffered from dementia, passed away unexpectedly after both my brother and I left her room to go home for the evening. My father on the other hand sought out our support. He even said to my brother and I that he didn’t know what he would have done without us.

Our family was all on-board with my dad’s decision to enter hospice and with his funeral arrangements, but many families aren’t. One scene was shot at a funeral home as Kenny and Rachel prepared Irv’s funeral. The actor who played the funeral director was the actual funeral director there. I told him what the scene is about. He said that family tensions are common. Often times, he found it was better to quietly leave the room and let family members deal with what they’re going through privately.

In the end, life goes on. A group of individuals who come together, with all their flaws, to support their father at a time when he needs help the most.

Nothing To Do is being submitted to film festivals now. If we’re lucky enough to screen in your city, I look forward to talking with you about your experiences with your aging parent and how you might or did handle their last few weeks.