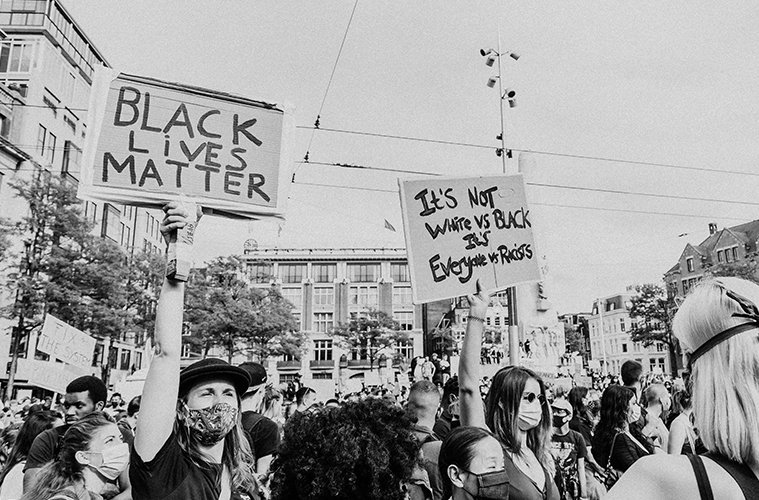 Need a Hand to Take a Knee

When a woman of a certain age, like me, takes a knee at a political rally it takes a village to raise her up! My last physical protest was the Women March in LA 2016 where I knitted my own pussy hat and a few others for my daughter and friends. It’s taken almost 4 years to build up enough energy to attend my next. With lower back and arthritic pain in my hips flaring up along with the rioters I thought I’d do more good for humanity by staying home and praying and meditating. But today’s call for action on Venice Beach made me question my choices. The protest was planned for people to wear black and their masks and to lie down there bodies on the beach over the distance of 3 miles between the Santa Monica and Venice Piers. I love the idea of lying down to protest. It is no different from what I’d be doing on my couch while meditating and the event was practically in my front yard so I had no excuse and went out to find the action.

I walked almost a half mile north crossing the border between Venice and Santa Monica but only saw a few stragglers on the beach. I could not tell if they were protesters but the walk along the water’s edge lifted my spirits. I continued to walk north until I got tired and then turned around to head south and back home. As I did my about face, I witnessed an army of humans mostly dressed in black, headed toward me. They were carrying many signs to honor our cause. I got very excited and rushed to join the movement. When I merged among the friendly youthful crowd comprised of all races, not many of my demographic were present but nonetheless I felt welcomed when a young woman thanked me for joining the march. After another half mile of walking on the soft and hard sand at the oceans edge, the parade stopped and a leader of the march took the mike. He asked us to pause and to take a knee for 8 minutes and 46 seconds, the exact time it took the Derek Chauvin to kill George Floyd, and so I did.

After the silence accompanied by the backdrop of waves crashing on the shore everyone the hundred or more marchers stood and cheered. I tried to rise up but literally had to ask a stranger to give me a hand to help me up and off the sand. Thrilled that I had done my part, at that juncture I decided to head toward my couch and some Advil to quell the pain. The events that followed the remainder of my walk home were just as promising and gave me hope for a new world where peace and love will reign.

I stopped on a bench to put on my shoes where a young Latina mom wearing a mask sat with her 2 year old gorgeous toddler. I pulled up my mask to make her feel safe and sat on the edge to provide some distance. Adoring her child I struck up a conversation. In less time that it took to take the breath from George Floyd, I made friends with Carlos, a cherub with long curly locks and long batting eyelashes. I also learned that his Dad was a world traveled journalist and his Mom was born and raised in LA. By the end of our conversation I asked where she lived and it turns out she is my neighbor and lives on my block.

When we parted and I continued by walk off the beach and onto the Venice Boardwalk, I saw many cops just standing and waiting to make sure the peace would prevail. I walked past a large Police SUV and a female officer behind the wheel with a buzzed butch hair cut smiled at me and said hello. When I returned the smile, both of us with our masks down, I noticed the other 3 officers in the vehicle, also females featuring butch hairdos. This was a huge contrast from ‘back in the day’ whenever I encountered cops; it usually ended in a ticket and or an arrest. Was it possible that as a wacky lady of a certain age, 74 to be exact, featuring little girl pig tails was being cruised by a butch lady officer behind the wheel? We struck up a conversation and our interaction was fun. I told them my story of how I had just come from the protest down by the water and all the rest of it; about needing a hand, to take a knee, and they all laughed and I could see they were getting a big kick out of me.

I left them with a blessing to stay safe and at peace and they returned the wishes for me. By the end of my march home I not only got more exercise than I’ve had in weeks, I gained a renewed hope for the world. Yes Rodney King, “we can all get along.”

Need a Hand to Take a Knee was last modified: June 14th, 2020 by Dolores Deluce